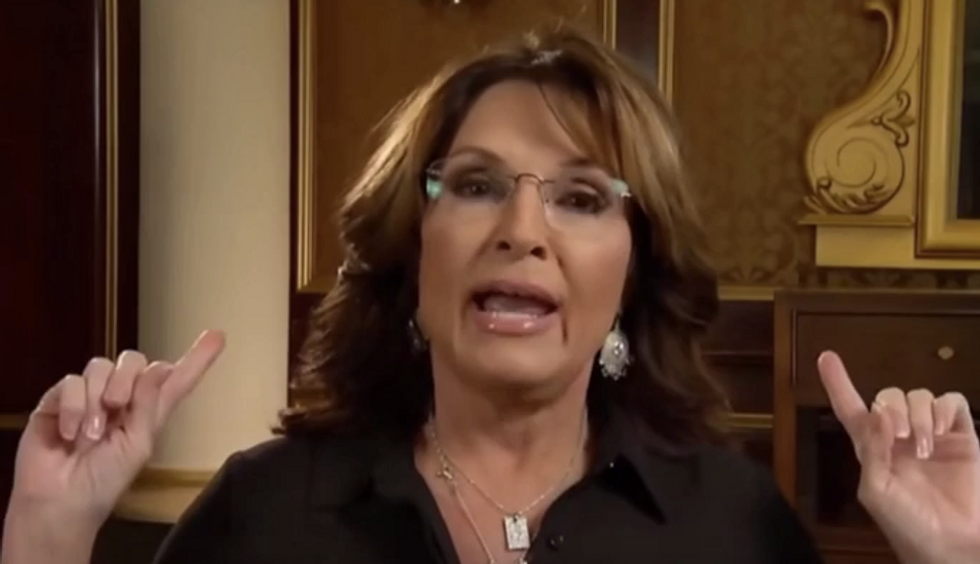 Who have two thumbs and are a idiot and also those isn't thumbs?

Dr. Ben Carson, who is just about done being A Thing, still has one supporter out there, you betcha. Since Sarah Palin cannot vote for her lady-crush-but-not-in-a-gay-way French fascist Marion Maréchal-Le Pen to be el presidente of America, and her moist Trump panties seem to have dried and crusted since the summer, Sarah's a-rootin' for her intellectual soulmate, sleepy-eyed broken-brained Dr. Carson. And she has some solid advice for him, as his popularity plummets before he can make it anywhere near the White House, based on her years of experience of being like that too:

It's a tough road in front of him, but as long as he keeps being candid and speaking truth and not letting political consultants or those around him who would ever wanna kinda change his message, just not let anybody try to shape you and mold you into something that some consultant wants you to be, that's a big mistake.

That's also one heckuva sentence, Sarah Palin, but that is why we love you!

But it is tough, jumpin' up there on a national stage when you hadn't been there before to really dig into idiosyncrasies of the issues and the details of some of our especially foreign policy issues. So it's a long hard road in front of him but, you know, I just have all the respect in the world for Dr. Carson.

Yes, those gotcha idiosyncrasies that have tripped up the good doctor. Like the difference between New Jersey and the Middle East. Like how Israel's "complex" political system sure is complex and should just be like America's instead. Like what is a Cuba and how does that work cuz no one has briefed him on it yet. Those kinds of subtle nuances that are hard to keep straight.

Now then, Sarah, would you like to tell the folks at home why Ben Carson is more better than Hillary Clinton? Please do so in your finest authentic frontier gibberish:

Dr. Carson is the antithesis of Hillary Clinton because of that integrity, the ethics, the honesty, the candidness, the trustworthiness of Dr. Carson versus that political establishment that has been you know just part of creating these problems and then blaming other people and never being held accountable and still try to buffalo voters into choosing them, pretending that they're going to do anything different than they've already done to get us into the mess. So yeah, talk about the antithesis of Clinton would be Dr. Carson.

Yeah, Hillary, YEAH! Everyone knows you're not nearly as trustworthy and integrity-ing as Dr. Carson, whose entire life story has been debunked as "Um, no" -- from the time he stabbed a man in Reno just to watch him die (but not really) to the time he beated up a robber in a Popeyes Organization, with his brain. And how dare you try to buffalo voters! We don't know what that means, but it sounds pretty darn ugly and maybe illegal in certain states and probably something Bristol would do in the back of a truck to end up oopsie daisy pregnant again.

No, again, I think if Americans do their homework, if voters look into what it is that Hillary Clinton, as secretary of state, supported in the context of everything that Barack Obama has been a part of, in growing government and creating this less secure, less sovereign nation of ours, fundamentally transforming it, Hillary Clinton was by his side. You know? She was shining his boots! So no, if people will realize that, then no, they will choose the antithesis of Hillary Clinton.

If only the American people will vet Hillary and realize she's been shining Obama's boots this whole time, then surely Dr. Ben Carson will be president. Yup, sounds exactly right.