Sarah Palin Being A Bit Of A Dick Again! 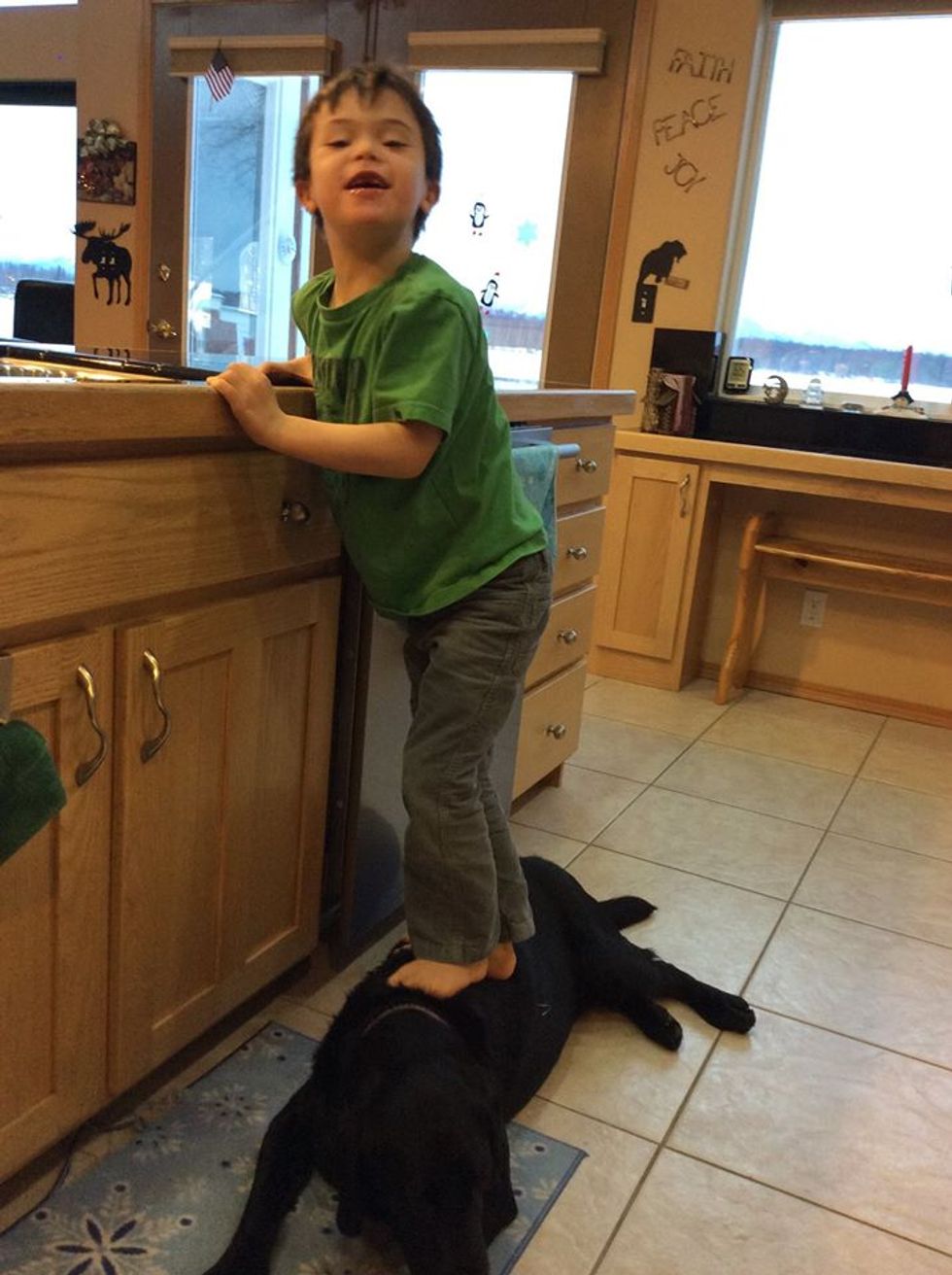 Over the weekend, there wasa bit of a dogshitstorm when former half-term governor/queen of your nightmares Sarah Palin posted a picture of her (VERY CUTE) son Trig standing on his service animal. Most people would say, "honey, we don't stand on the dog." Palin chose instead to parabolate on stepping stones, and how you should step on people and dogs and then probably shoot them from a helicopter. The internet was not pleased!

Well, Mrs. Grifterbottom had some other ideas, and those ideas were to yell about Barack Obama rounding up all of Washington DC's stray animals and putting them in his moose stew!

Here she is, going on and on at all her glorious snitty length, so you know PETA got under her skin. (BY CUTTING HER SKIN OFF TO WEAR AS A PEOPLE COAT.)

Hey, by the way, remember your “Woman of the Year”, Ellen DeGeneres? Did you get all wee-wee’d up when she posted this sweet picture? http://conservatives4palin.com/…/peta-woman-year-posts-phot… Hypocritical, much?

Did you go as crazy when your heroic Man-of-Your-Lifetime, Barack Obama, revealed he actually enjoyed eating dead dog meat?

Aren’t you the double-standard radicals always opposing Alaska’s Iditarod – the Last Great Race honoring dogs who are born to run in wide open spaces, while some of your pets “thrive” in a concrete jungle where they’re allowed outdoors to breathe and pee maybe once a day? (http://iditarod.com/ http://www.irondog.org/)

Aren’t you the same herd that opposes our commercial fishing jobs, claiming I encourage slaying and consuming wild, organic healthy protein sources called “fish”? (I do.)

Aren’t you the same anti-beef screamers blogging hate from your comfy leather office chairs, wrapped in your fashionable leather belts above your kickin’ new leather pumps you bought because your celebrity idols (who sport fur and crocodile purses) grinned in a tabloid wearing the exact same Louboutins exiting sleek cowhide covered limo seats on their way to some liberal fundraiser shindig at some sushi bar that features poor dead smelly roe (that I used to strip from our Bristol Bay-caught fish, and in a Dillingham cannery I packed those castoff fish eggs for you while laughing with co-workers about the suckers paying absurdly high prices to party with the throw away parts of our wild seafood)? I believe you call those discarded funky eggs “caviar”.

Yeah, you’re real credible on this, PETA. A shame, because I’ll bet we agree on what I hope is the true meaning of your mission – respecting God’s creation and critters.

Our pets, including Trig’s best buddy Jill Hadassah, are loved, spoiled and cared for more than some people care for their fellow man whose politics may not mesh with nonsensical liberally failed ways or don’t fit your flighty standards.

Jill is a precious part of our world. So is Trig.

Ahem. Some "thoughts." Is PETA an easy target? Hooo boy are they! They are always trying to get you to deep-throat cucumbers or rhubarb or eggplants or something, and they're kind of a bunch of twats, and they euthanize animals REAAALLL fast. It's their stated policy! (They probably don't wear leather though.)

You know who is less of an easy target? The Alaska SPCA, which is a tad bit concerned about children standing on dogs, as that can hurt them. Here's what they had to say on their Myface page!

Regarding the posts to our wall and messages about Sarah Palin's dog: The Alaska SPCA agrees that this type of behavior with an animal is unacceptable. Please know that the appropriate enforcement authorities have been notified. The location of the household falls under the jurisdiction of the Mat Su Animal Care and Regulation. You can register complaints there as well. (907) 746-5500

There is a weird long rant about caviar, because Sarah Palin is the people's princess and she shucked those ol' baby sturgeon fetuses outta those ol' sturgeons and sold it to suckers like you what enjoy stuff besides Taco Bell and moose, like a buncha idiots. [contextly_sidebar id="NgwnHdAMQq1LAAmHkehv5nsNkWcabKn6"]

This is a sentence that makes a lot of sense:

Our pets, including Trig’s best buddy Jill Hadassah, are loved, spoiled and cared for more than some people care for their fellow man whose politics may not mesh with nonsensical liberally failed ways or don’t fit your flighty standards.

Then she sort of implies that liberals are trying to kill her baby, again, with this snotty little addendum.

Jill [the dog] is a precious part of our world. So is Trig.

Did someone say Trig wasn't a precious part of your world, Mme. Palin? No, they said, "oh, you really shouldn't let your son stand on a dog, it is not good for children and other living things." And that's why Barack Obama is a Kenyan impostor who tried to put Trig in a FEMA camp, Second Amendment and Tree of Liberty and some other stuff the end.