Sarah Palin Can See Clocks From Her House, And Ahmed's Thing Is NOT A Clock 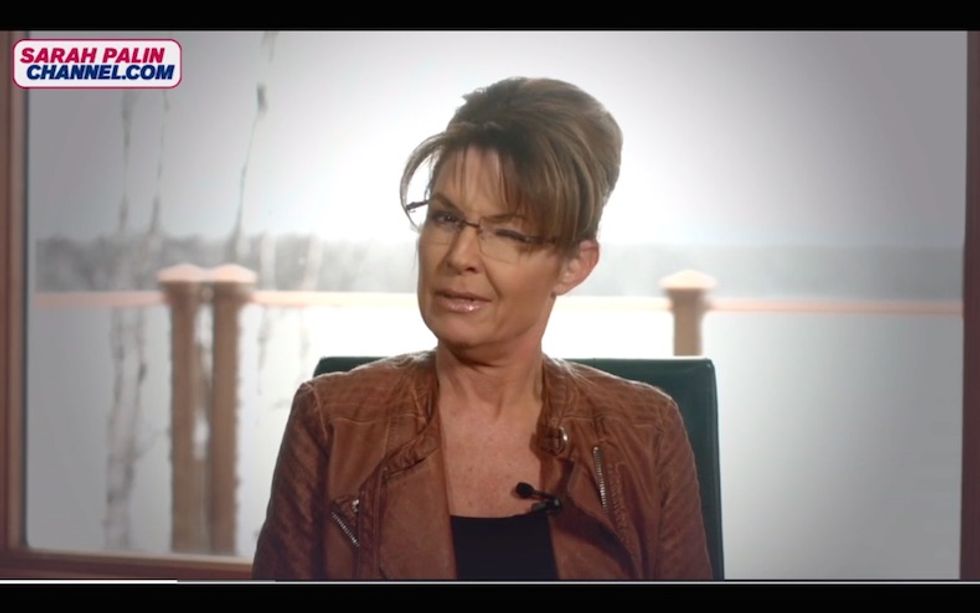 A new pattern is emerging, kind readers. Whereas it used to be that Sarah Palin would endeavor to say the First Stupid in any national conversation, she's increasingly letting her spawn Bristol do that, on her "blog." It happened during the NATIONAL CRISIS!!!!!1!!!111! when President Obama renamed Jesus's favorite American mountain as "Denali," even though literally nobody in Bristol Palin's Alaska calls it that. (Bristol Palin's Alaska is an abstinence support group, and it has three pregnant members.) Bristol said the First Stupid, then Sarah swooped in a week or two later to augment the derp. And now, we have Ahmed and his magical clock, which Bristol and the other wingnuts just KNOW is a bomb. Specifically, Bristol said, "It doesn't look like a pencil case to me."

Did Sarah come in and correct her wayward daughter, saying, "OK, honey, but there are lots of pencil cases in the world, and you're not an expert on all of them just like you don't know how babies are made, so you shouldn't words on the internet if you don't know what you're talking about"? FUCK NAW, Mama Grizzly is the patron fucking saint of words-ing on the internet about shit she knows nothing about, so she decided to yet again augment the derp on her Facebook wall, with the headline "I Guess Muhammad's Pencil Box is Cooler Than the Palin Kids'":

Whereas Ahmed Muhammad [sic], an evidently obstinate-answering student bringing in a homemade "clock" that obviously could be seen by conscientious teachers as a dangerous wired-up bomb-looking contraption (teachers who are told "if you see something, say something!") gets invited to the White House.

Yeah, how dare that little Muslim boy be so obstinate, by refusing to admit that YEP LOL he's trying to build bombs? As to a lack of explanations for his teachers, it could have been because Ahmed was so stunned that his teachers were acting like assholes that he was struck dumb, or it could just be that he's a geeky, shy teenager. But anyway, that "dangerous wired-up bomb-looking contraption" was obviously so scary to the teachers that they told him to keep it in his backpack, just like you do with all suspected bombs. Keep your bombs to yourself, Terror Boy!

OK now Palin would like to word salad about how Barack Obama is the REAL "Ahmed The Clock-Maker":

By the way, President Obama's practice of jumping in cases prematurely to interject himself as the cool savior, wanting so badly to attach himself to the issue-of-the-day, got old years ago. Remember him accusing police officers doing their job as "acting stupid"; claiming if he had a son, he'd look like Trayvon Martin; claiming he needed to know who was a fault in an industrial accident so he'd "know who's a** to kick"; etc., etc. Those actions are about as presidential as his selfie stick.

Where did the president get off, saying his son might look like Trayvon Martin? What does he think he is, black or something? Way to be Trayvon's "cool savior," President Nobummer! And he can definitely leave commenting on the "issue-of-the-day" to the Palin family, dontcha know, since it's not like they're busy with much else. And also, too, they are so smart:

Yep, believing that's a clock in a school pencil box is like believing Barack Obama is ruling over the most transparent administration in history. Right. That's a clock, and I'm the Queen of England.

Sarah, being the resourceful lady she is, was ready with a "gotcha!" answer to any dumb liberal MORANS out there who think Ahmed's thing is a "pencil box," as opposed to what it really is: a tiny 8-inch suitcase for tiny bombs carried by tiny Barbie's Dream House Terrorists. So she went up in the attic and dug through all the kids' old school shit, so she could get on Facebook and show everybody what a REAL American pencil box looks like. Here's what she found:

So basically, we have a box of pencils in their original packaging, and we have some cheap ugly thing she bought at the Big Lots from when Bucket or Stryker went to kindergarten for the first time.

Well, we think this conversation is settled, and Sarah Palin has proven her original headline true: Ahmed's pencil box is a METRIC FUCKTON cooler than whatever shit Sarah bought for her kids.