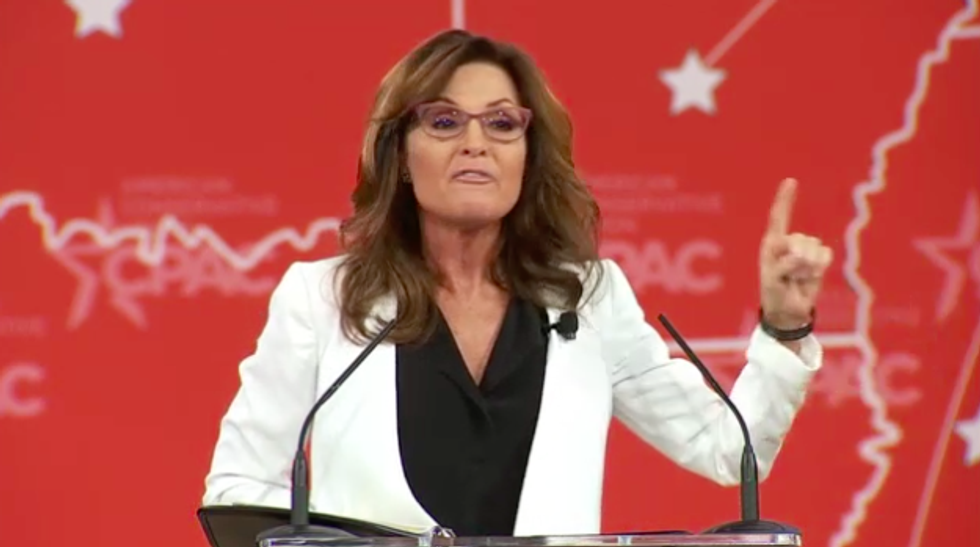 We do not know what happened to our beloved sister Sarah Palin, but obviously someone sedated the hell out of her and told her if she dares to go off script during her speech at CPAC this year and vomit incoherent nonsense all over the stage like she usually does, she will get the hose again, precious, and no more reality teevee deals.

We were expecting fire. Brimstone. Perhaps some revised Dr. Seuss, like at last year's convention. ("Hat tip, the internet!") Lots of nouns and slurs and eye-rolling, gerunds galore and the occasional verb here and there, with the distinct odor of booze wafting across the interwebs. But no. NO! Instead, she read verbatim, from her prepared notes as was probably stipulated in her contract, the words someone who is not Sarah Palin wrote for her, and there was not a single "also too," and godDAMN we are depressed, why wouldn't they let Sarah be Sarah? We had such high hopes.

"I’d like to tell you a story about America’s first veterans," she said, and delivered a series of complete sentences that each had a subject, verb, and predicate. "There’s been a long line of heroic vets, and they connect our history, from George Washington to Chris Kyle."

She then issued a series of not completely wrong grievances about the less than stellar treatment of our veterans, like her hero son Track, although she is confused about the timeline, since we've been treating our veterans pretty badly for kind of a while now, but aw heck, she IS Sarah after all, so as far as she's concerned, this is a recent phenomenon, and you know whose fault it is, right? It is George W. Bush's fault!

It is said that old men declare wars, and then they send the young ones to fight 'em. So it’s the duty of he who sends them to make sure we actually win those wars.

Terrific advice, we sure wish President Old Man Obama had heard it before he declared war on Iraq and Afghanistan, which we may or may not have won, who can say?

Did we actually win in Iraq and Afghanistan before we waved that white flag? The jury is still out.

When it comes to ISIS, though, the jury has reached a verdict. See, after we did or did not win those wars, there was a warning from "the military brass to the left" that we needed to stay in those countries forever, just in case we suddenly un-won those wars. But Obama didn't listen, sigh.

“The rise of ISIS?" Sarah said. "It’s the direct result of this administration’s refusal to heed that warning.”

Then she launched into a really weird thing about Nazis, because apparently, someone just taught her all about World War II and how bad that was, but thank god we killed every single last bad guy forever.

In the past, our leaders confronted evil with moral clarity. Eliminated fascists and the Nazis. ... Make no mistake, radical Islam is just as dangerous as those ideologies.

Then she let Obama know she and the rest of her fellow Real Americans do not appreciate the president "lecturing Christians to get off our high horse about radical Islam" because that "won’t stop the Islamists from killing Christians." Only lectures from Sarah Palin are effective, duh.

Stop blaming the victim and wake up, Mr. President. While Christians bow our heads to pray for you, radical Islamists want to cut off your head.

Do we believe for a second that Sarah Palin bows her head to pray for the president? No. No we do not. But anyway, back to Nazis, because she's really into that now.

"We will consign radical Islam to the ash heap of history," she said, "just like the Nazis before them." She's also quite annoyed with the State Department -- Obama's State Department -- that says you cannot actually bomb to death every single last one of our enemies. But pfft, shows what those guys know.

Tell that to the Nazis. Oh wait, you can't, because they're dead -- we killed 'em.

Boy is she going to be surprised if anyone ever teaches her about all those Nazis who escaped to other parts of the globe and even got jobs working for the U.S. American government of the United States!

The jihadists fight out of hatred, hatred of Jews and Christians and women and diversity and freedom. Our troops, they fight out of love.

Yeah, we don't actually know what that means either. She must have managed to sneak that one in past her minders, we guess.

Once Palin reached the "wait for applause" words on the last page of her notes, she did have a very brief opportunity in a question-and-answer session to finally speak her mind. Except that she was asked to give one-word answers. Good thing she can't count too good.

What does she think about Barack Obama? "Sorry. Hey, we came in second out of two."

And as for all the young next-generation millennials at the conference? What one word does she have to say to them?

Hopefully through osmosis some of the message I just delivered will be received by them.

Ah, now, see, there's our Sarah. Whew. For a while there, we were worried. But nope, she's still got it. Guess the tranquilizer wore off just in time.