Sarah Palin Has Learned To Word Salad In Russian, Y'all 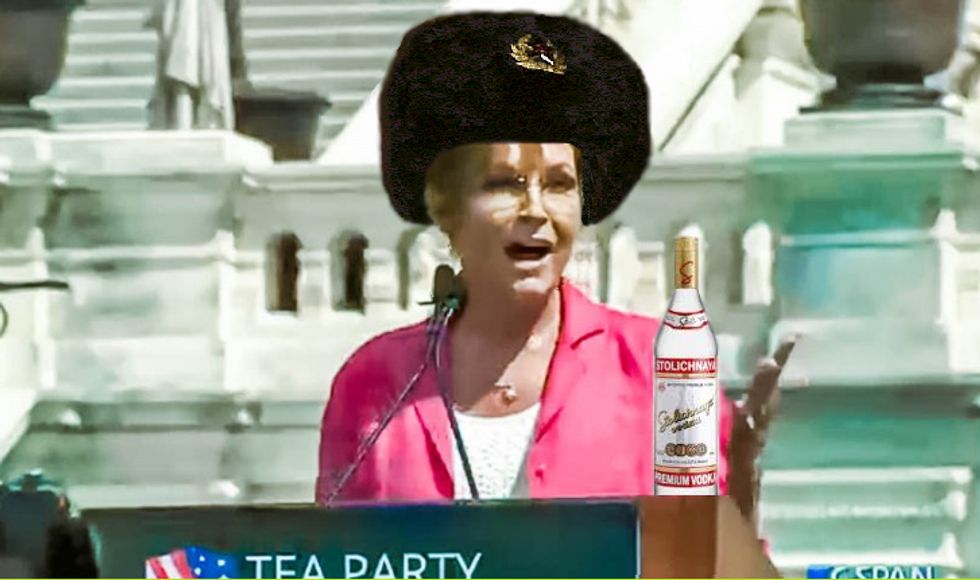 Let's not fuck around. Here is Sarah Palin, speaking at a Tea Party rally in Washington DC on Wednesday, in opposition to the deal with Iran. Or Eye-ran, if you prefer, as she does. We won't bother with lengthy preambles written in our favorite language of Palinese. We'll just get right to it, all of Sarah's drunken and drugged words, offered in full, with some very light annotations.

Behold, America, the former half-term governor who was this close to the vice presidency:

Thank you. Man, I never thought I’d say it, but I think you all are a lot tougher than Alaskans, being able to be out here. I’m roastin’! I’m meltin’! I’ve always said, though, sweat is my sanity, so as I sweat, let’s bring some SANITY to this discussion about this insane “treaty” that’s in front of Congress.

Sorry, we probably should have warned you about that graphic imagery of Sarah Palin sweating out her sanity. Oh well.

Thank you for being here and raising a voice of sanity. For gathering to uphold the promise that was made -- that promise: never again. And thank you for gathering, as we can because we are still a free people, and if you love that freedom, thank a vet. We thank you.

Oh, and uh, you know, since our president won’t say it -- since he still hasn’t called off the DOGS -- we’ll say it. Police officers and first responders all across this great land: We got your back! We salute you! Thank you, police officers!

We don't know which DOGS she means. We could guess. We won't. But we could.

OK, of course Obama still is insane to anyone but Iranian regime sympathizers. His betrayal of U.S. hostages, he left them behind. His betrayal of America, he has strengthened our enemy. The whole premise of this thing, it’s wrong. We’re negotiating with the braggadocious number one state sponsor of terrorism?

Braggadocious. That's an awful big word for A Idiot.

Obama never even clenched a fist against a wicked regime where anti-Semitism and Holocaust denial is official ideology, and with state-sanctioned torture and killing of women just because they’re women, well, stoning, amputation -- those things that are just national policy. And what has changed? Nothing’s really changed, except Hillary Clinton, back then, she insisted that Eye-ran is seeking nukes but now she says, “Eh, that’s OK.” She spins faster than one of those THOUSANDS of Eye-ranian centrifuges.

Fun fact: Those thousands of centrifuges were acquired under the Bush-Cheney administration, though Dick Cheney insisted just last weekend that it was Obama's fault. Somehow.

The blood of U.S. soldiers is on the ayatollah’s hands, and we dare shake that hand in negotiations. Our sons and daughters sacrificed -- in Iraq, still, in Iraq -- and they’re there to disempower the extremists in their neighboring crazy land, Eye-ran.

Yet the white flag was waved at the table, in these negotiations, because Obama had a squishy objective to start with, instead of our solid rock objective to put America first.

Hey, you guys, remember in 2012? Remember in 2012, when Joe Biden told everybody, “Our president, he carries a BIG stick, I promise it’s a BIG stick.” Well, little did we know he was talkin’ about Obama’s selfie stick.

"Big stick." We get it. Dick jokes. Good stuff. But then, she's always been classy as fuck, yo. Perhaps Sarah Palin would like to try quitting a writing gig for Yr Wonkette.

So, it’s up to us to tell the enemy, “We win, you lose.” Just like Ronald Reagan would have told them, because ya gotta think about, again, the premise of this.

Sure, but first we gotta think about how Ronald Reagan didn't exactly say "We win, you lose" so much as secretly negotiate the sale of weapons to Iran, while it was holding Americans hostage. Potayto potahto, apparently. But please proceed, Governor:

But now -- remember, the enemy comes to kill, still, and destroy. But now they’re gonna inspect themselves? Oh, what could go wrong with that? Yeah, don’t call us, we’ll call you, they say, and that’s really good because Obama is standing by, with his mighty phone and his mighty pen, in case they stretch the truth a little, and they start droppin’ bombs.

And here's the part where the acid kicks in:

No, only in an Orwellian Obama world, full of sprinkly fairy dust blown from atop his unicorn, as he’s peeking through a really pretty pink kaleidoscope, would he ever see victory or safety for America or Israel in this treaty.

This treaty will not bring peace. You don’t reward terrorism! YOU KILL IT!

Acid, it turns out, does not mix well with vodka:

You don’t lift sanctions, you crack down on their assets. You cut off their oil and drill, baby, drill for our own! We don’t retreat, we reload, and yes, any foe daring to test us -- and that is what Eye-ran just did. They tested us. So Congress, ya gotta kill the deal. The president is playin’ ya, Congress. Again. He so disrespects you, Congress, and our Constitution, that he won’t even bring the treaty to you, wholly. You can’t, this time, Congress. Gotta pass it to see what’s in it. Not this time.

It's not as if Congress has given the president any reason not to trust -- oh wait. There wasthat open letter to Iran's leaders, signed by almost every single Republican senator, explaining how Obama is not really the president in any official capacity, and should therefore be ignored until a better, realer Republican president is elected. There was that.

And yet, he’ll trust a death cult, boasting of its pals, Russia’s -- increased dominance of the world’s uranium supply that needed for the nukes. And that has been made worse, thanks to us gifting our uranium production capability, and that’s a mistake, thanks a lot, Hillary Clinton. It’s a mistake SO ENORMOUS, on such a grand crony capitalism scale, that I can only compare its enormity to Alaska’s Mount McKinley. It’s that size.

We are old enough to remember when Sarah Palin referred to Mount McKinley by its original native name, Denali. It wasn't that long ago, actually. Around the same time it was her Secret Service code name. Ah, but that was before saying "Mount McKinley" was a dig at President Obama, sort of like how Bible-humpers love to scream "UNDER GOD!" when they recite the Pledge of Allegiance, to mean, essentially, "FUCK YOU!"

So up there in Alaska, across the way, Russia -- you know, there’s a name for this taking advantage of America, there’s a Russian name for that. And it’s called “fortochka.” And that mean’s “Obama’s window of opportunity.”

Yeah, that's not what that word actually means. But also too, didn't Palin say, just the other day, that if you're in America, you should "speak American"? And that we shouldn't even bother learning other languages because in high school, she studied French and Spanish and she "got them all mixed up." Maybe she's thinking of a Spanish phrase for "Obama's window of opportunity." Languages is hard and confusing when they're not the American kind.

So as Obama leads from behind -- the skirt of his right-hand man, Valerie Jarrett, then it’s up to Congress to close that window. He may propose, you dispose, Congress. You gotta be in it to win it because we want peace, with unapologetic mighty red, white, and blue, we’ll have peace.

Yeah, no idea what that means. Sorry.

Because war is hell. Yet, as in all other things, this administration loves conflict so much, that they’ll take pressure off the bad guys that reward bad behavior -- yeah, that’s an Obama world, with borders wide open, IRS harassing, servers a-wipin’ -- where his bad actors are rewarded, while a Christian clerk goes to jail.

Naturally, the crowd is quite thrilled with this, Palin's crescendo of rightwing bingo. Even though she forgot to say Benghazi.

So the call to action, friends, is take action. Do not play small, it does us no good to play small, that’s not why you were created, and we have not enough time to play small. You be empowered, and render a biased lapdog media powerLESS.

Hey, media! They’re on to ya. Your role is played out and you’re relegated to the ash heap of history, so look around, friends, you’re not alone. There are more of us than there are of them. Take action, and don’t let your prayin’ knees get lazy.

We're not going to touch the lazy prayin' knees or wonder how Sarah keeps hers in such good shape. Nope, not touching that one.

God bless Israel, then America? In that order? What happened to our solid rock objective of putting America first? Oh, no matter.

We won't conclude with any pithy LOL witticisms. We'll just end by pointing out that Glenn Beck -- you know, too crazy for Fox News, actual broken brain Glenn Beck -- declared on Thursday that even he has had enough of her: