Sarah Palin Is Idiot, Whereas Tom Cotton Is ... Correct? Huh, That Can't Be Right ... 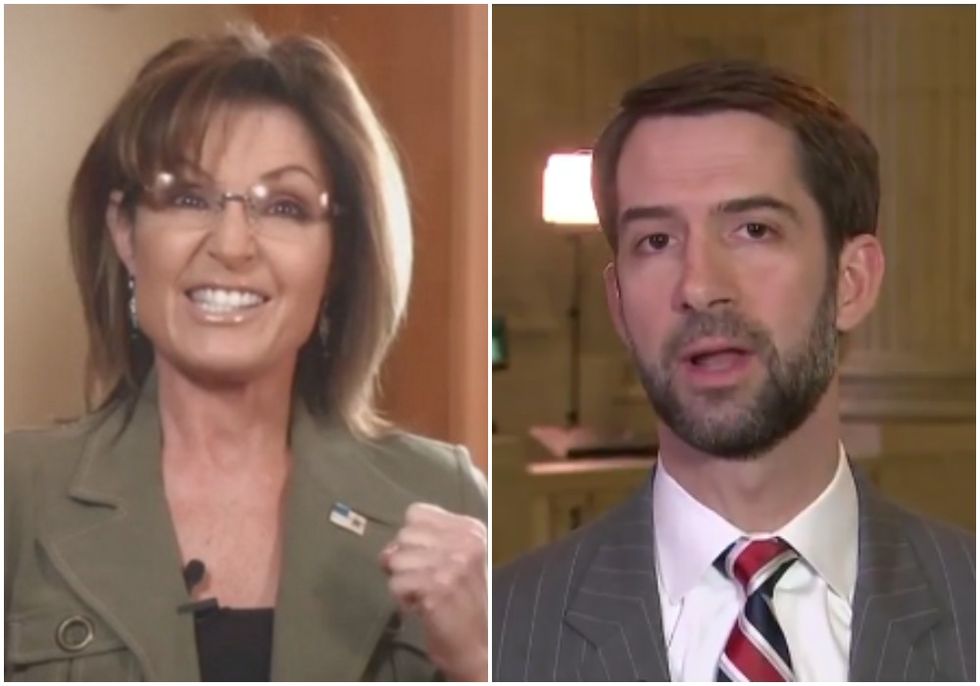 Sarah Palin also too has a thing to say about Julian Assange and how good at intelligence he is with his emails and his Wiky-Leaky, just like Donald Trump knows Julian Assange is probably better at knowin' things and readin' stuff than the U.S. intelligence community. You see, once upon a time up there in Alaska in 2008, a naughty boy hacked into all Sarah's emails about "Buy Funyuns!" and "Tell Bristol how babies are made!" and Wikileaks put them on the internet and Sarah went all Mama Grizzly on Julian Assange! So in 2010, she said some very unkind words about how he was bein' anti-American, oh boy, she wanted to wood-chipper him like a pardoned turkey on Thanksgiving:

“He is an anti-American operative with blood on his hands. His past posting of classified documents revealed the identity of more than 100 Afghan sources to the Taliban," she said of Assange in 2010.

"Why was he not pursued with the same urgency we pursue al-Qaeda and Taliban leaders?”

But that was then, and this is now. Sarah Palin saw a TV interview her pal Sean Hannity did with Julian Assange, and has concluded on her Facebook that, now that Assange has acted as Russia's puppet to help get her favorite person Donald Trump elected, all is forgiven, and Sarah is very sorry for being an Alaskan Snow Dick to the poor, put-upon accused rapist:

Exposing the truth re: the Left having been oh-so-guilty of atrocious actions and attitudes of which they've falsely accused others. The media collusion that hid what many on the Left have been supporting is shocking. This important information that finally opened people's eyes to democrat candidates and operatives would not have been exposed were it not for Julian Assange.

OH-SO-GUILTY! Wait, what did Assange expose that was atrocious again? That Democratic campaigns have the audacity to strategize? Does Palin have a bone to pick with John Podesta's risotto cooking technique? Or is she really so stupid that she thinks pizza toppings are code words for having sex with children?

I apologize for condemning Assange when he published my infamous (and proven noncontroversial, relatively boring) emails years ago.

IT'S OK NOW! Maybe Lil' Julian would like to read some more Palin emails! SECRET MOOSE CHILI RECIPE CONTAINED WITHIN!

As I said at the time of being targeted and my subsequent condemnation, though, the line must be drawn before our troops or innocent lives deserving protection would be put at risk as a result of published emails.

What about if emails hacked by Russia and released by Assange resulted in the election of an unqualified, trigger-happy man-child who's likely to get troops and regular American citizens killed when he prematurely ejaculates all over the nuclear codes and starts World War Three? Would Sarah "draw the line," or is it OK because Daddy Trump and Julian Assange Know What's Best?

Palin closes her Facebook post by saying Snowden is a good movie, so guess he's cool now too.

Jesus effing Lord, the woman has no principles, and also too no goddang brain.

NOW FOR THE SECOND PART OF THIS POST, WHAT IS ABOUT TOM COTTON!

Arkansas Sen. Tom Cotton is world-famous in America for being probably the dumbest goddamn thing Arkansas has birthed since Mike Huckabee squeezed his way out of his mama's down theres. Even better than that, Cotton is POMPOUS and pretty sure his 39-year-old ass is smarter than everybody who ever lived. He thought it would be cool, as a tiny baby Arky senator, to send Iran a love note about how Obama isn't the REAL president, therefore ya ain't got no reason to negotiate some kinda nuclear "deal" with him. He got into a Twitter fight with the Iranian foreign minister, and promptly and hilariously LOST that Twitter fight. He got "mad enough to tittyfuck a swallow," in the elegant words of yr Wonkette, when White House Press Secretary Josh Earnest made fun of him for not knowing shit about Iran, and then promptly lost ANOTHER Twitter fight, the one he started with Josh Earnest.

That is why his words, on Trump and Julian Assange and our 'Murican intelligence agencies, are so jarring. He's ... CORRECT?

This morning I discussed #Russia on @MSNBC @Morning_Joe. WATCH: pic.twitter.com/DtAx4RDvv4

I have a lot more faith in our intelligence officers serving around the world, very smart and experienced analysts that we have here in the nation's capital, than I do in people like Julian Assange, I can tell you that much. Look, I don't dispute the intelligence community's assessment from October 7 that Russia or Russian associates were behind the attack on the DNC. I simply think that that's to be expected from Russia, that's what they do.

And then he said some douchebag shit about how it's Obama's fault, proving true the old expression that "Even a hillbilly whose brain is stalled 24 hours a day can be correct for 30 seconds at a time, and then will immediately go back to being an uninformed, too-big-for-his-britches twat right after that." (It's a long expression, which is why you don't see it on coffee cups very much.)

But ... WTF? What in Christ's name has America come to when Tom Cotton sounds as sane as a common Democrat (or a halfway sane Republican like Lindsey Graham, who's also been going after Trump on this) on the issue of Russian hacking and Julian Assange being a total fuckweasel, whereas we literally cannot be certain which country's side the president-elect of the United States is on?

Oh well. Good job being halfway smart this one time, Tom Cotton, and Sarah Palin, you are free to shut your yap any old time now.