Sarah Palin Just Might Quit A Half-Term Of A Office Again One Day, Hooray! 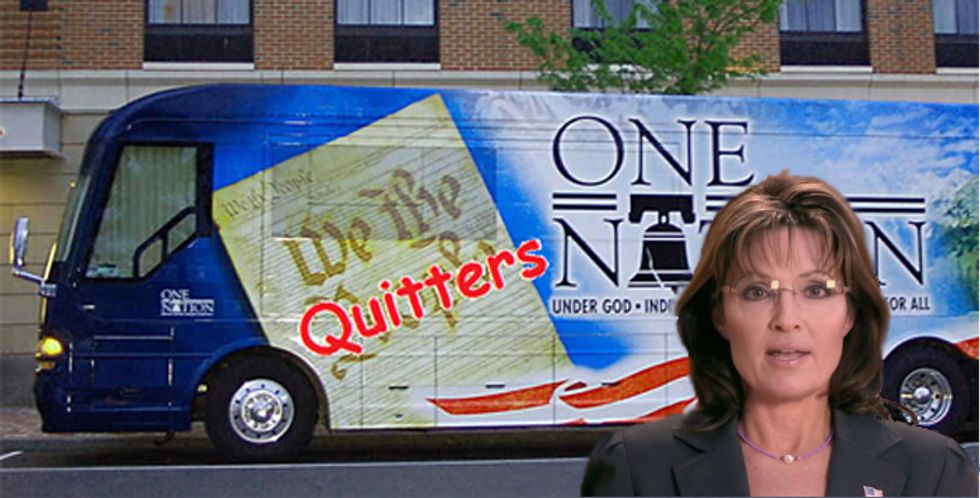 Ever since Our Lady of Meth-Colored Lipstick quit her job to pursue a reality teevee career because only dead fish serve a full term as governor, we have a-hoped and a-prayed that Sarah Palin would one day run for being in office of something again one day.

Alas, we'd really quit half-hoping after Bill Kristol, the patron saint of stupid politicians and also too of being wrong about everything and furthermore the one who discovered how you betcha! great Sarah up there in Alaska was, predicted (in 2013) that she probably would never half-serve in half-office again, despite attempts by the Alaska teabaggers to draft her to run for Senate in whatever state she is a resident, who knows, all of 'em maybe.

Once Sarah declared that she would now word salad to power with her interwebs show on The Sarah Palin Channel, about Sarah Palin, starring Sarah Palin, with special guest appearances by Sarah Palin, because that's where the real power is, we knew we'd never see her name crayoned on a ballot again.

Palin said in an interview with Fox Business Network on Tuesday that she is invigorated by her critics, who make her "want to work so hard for justice in this country."

"The more they're pouring on the more I'm going to bug the crap out of them by being out there with a voice, with the message, hopefully running for office in the future, too," Palin said.

Do we believe that Sarah Palin will hopefully be of running for the office of something of Real America again too one day? Of course not! What are we, a Palin?

Running for office takes time and work and other things, and you even have to finish the bus tour and everything, and what with having to explain how her family was humiliationated and ashamed by her trashy drunken daughter Bristol brawlin' so hard in her bare feet, and explaining how "climate" "change" is the eugenics of this century, she certainly can't do it all!

But we are going to hope that this time that Sarah is being of teasing us with pretending that she will do some running for A Office, she will do it for reals. And if she does, we already know from polling in 2013 that she'd have an edge on "Not Sure." With an advantage like that, she's practically president or vice senator or a representatationist in the House already!

Please run for A Office, Sarah. A few minutes of internet airtime a week is simply not enough. And since you are the one who with a hand that is single saved the career of some nobody named Tina Fey Something-or-other, it is clear that you and you alone can also too save America, for freedom.