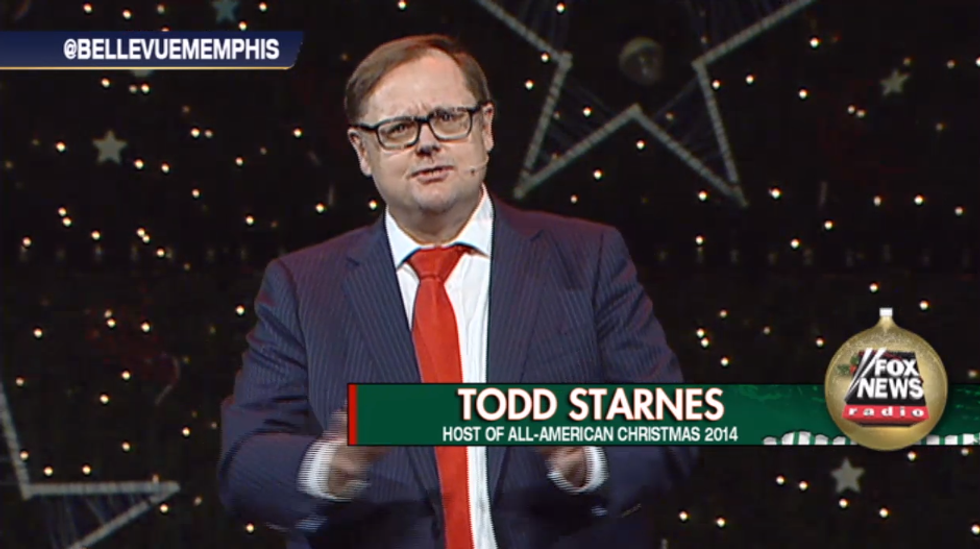 Guys. GUYS. This is basically the best thing that ever happened. Todd Starnes, Fox News Radio host and one of the world's greatest defenders of Conservative Tax-cutting Gun-toting Jesus, celebrated the birth of our lord (Jesus, not Ronald Reagan) with a singing and dancing and totally not gay at all spectacular All-American Christmas Special. And it is SO the best. Why, just look at these ladies celebrating Jesus in their aprons, probably about to make some sammiches as the good lord intended!

After the big opening number, Todd Starnes himself comes on stage to talk about Jesus (drink!), but first, a little reminder that you're probably getting coal and going to hell if you watch MSNBC, like it says in the Bible.

[contextly_sidebar id="bF0IFsmI0DlgA69bHclBbi9ieHv1g0Hj"]“If you listen to one of those other stations," he says, "you’re probably on Santa’s naughty list.”

Then he talks about pork butt. He really loves pork butt, but -- and swear to Christ, we are not making this up, this is an actual direct-from-his-derphole quote -- "We can all agree that Chick-fil-A is the official chicken of Jesus, Amen."

Then the show takes a serious turn.

There’s a word of warning I need to issue for all of the politically correct folks out there, and you know who you are. These grinches who get their stockings in a bunch at the sight of a nativity. Well, I don’t mean to curdle your eggnog, but I’m about as politically incorrect as as they come, folks. I believe that Jesus is the reason for the season. And during our Fox News Radio Christmas Special, we’re going to conduct ourselves accordingly and celebrate the birth of our lord.

Which is the perfect lead-in to Starnes's first very special guest: Sarah Palin, phoning it in from Wasilla, Up-There-In-Alaska. Because Jesus might be the reason for the season, but he's not reason enough to hop a plane to show up in person.

The other reason for the season, besides Jesus, is a reminder to buy Sarah Palin's book about the "War on Christmas," which apparently was inspired by none other than Todd Starnes and his coverage of those who would "take Christ out of Christmas" -- by failing to buy Sarah's book, we assume.

Let's all come together to enjoy Sarah explaining why Christmas is, like, totally important for everyone -- not just Christians! -- who want to put Christ back into Christmas.

Christmas is so extremely important. And not just for Christians -- of course that’s the foundation of our faith, the birth of Christ -- but also for those who just want to celebrate, to have a holiday that they can unite around, and today, unfortunately, people feel that they have to be so politically correct around that holiday, Christmas, that the joy of Christmas I think is diminishing, but it’s not too late, you can get that back, and we can keep working together to get the joy back into Christmas by putting Christ back into Christmas.

Later in the show, Al Robertson of Duck Dynasty fame also makes an appearance, although we had to stop watching before we literally DIED of laughter. If you are brave and/or bored enough, you can enjoy the whole thing though. For Jesus. And America. And Sarah Palin. Not necessarily in that order.