Sarah Palin Made A Funny About Ferguson 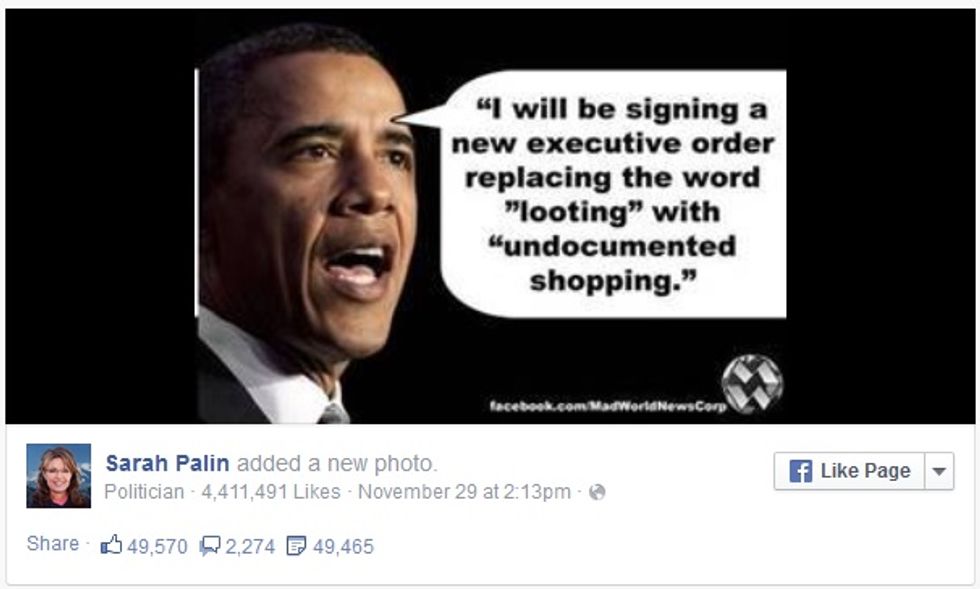 After having said pretty much nothing about the shooting of Michael Brown in Ferguson, Missouri, occasional reality television show front-woman Sarah Palin finally shared her thoughts with America over the weekend by reposting to her MyFacePlace page a joke from rightwing conspiracy website Mad World News.

Get it? It's funny because it's true! Obama is so completely in favor of looting and lawlessness! If only he'd maybe say that looting is bad, but no, all he does is just make excuses for looters all the time, like when he told people to go out and burn down Ferguson last week, remember when he said that? Remember how he said,

I join Michael’s parents in asking anyone who protests this decision to do so peacefully. Let me repeat Michael’s father’s words: “Hurting others or destroying property is not the answer."

Those were actually code words for "Burn stores and loot them," because Obama also told all the illegal aliens that they could come across the border all over again and bring more illegal immigrants with them next time.

Oh, also, some people made fun of the creative use of quotation marks in the photo, so Mad World News -- you may remember them from such highly creative reporting moments as the time they turned a busload of completely legal farmworkers buying supplies with their completely legal pay into a bunch of illegals buying groceries with EBT cards -- has issued a corrected joke version and a complaint that liberals can't use grammar good, because liberals "can't grasp satire or wrap your head around a joke" and besides, liberals should just shut up about grammatical errors, because just "take a look at some of the horrendous sentence structure, grammatical catastrophes and poor use of punctuation by some of your bretheren over at MSNBC.com."

"Brethren," you fucking moron. Or was that a subtle joke that we failed to get, too?