Hey Black People! Sarah Palin Is Pretty Sure She Knows More About Martin Luther King Than You Do! 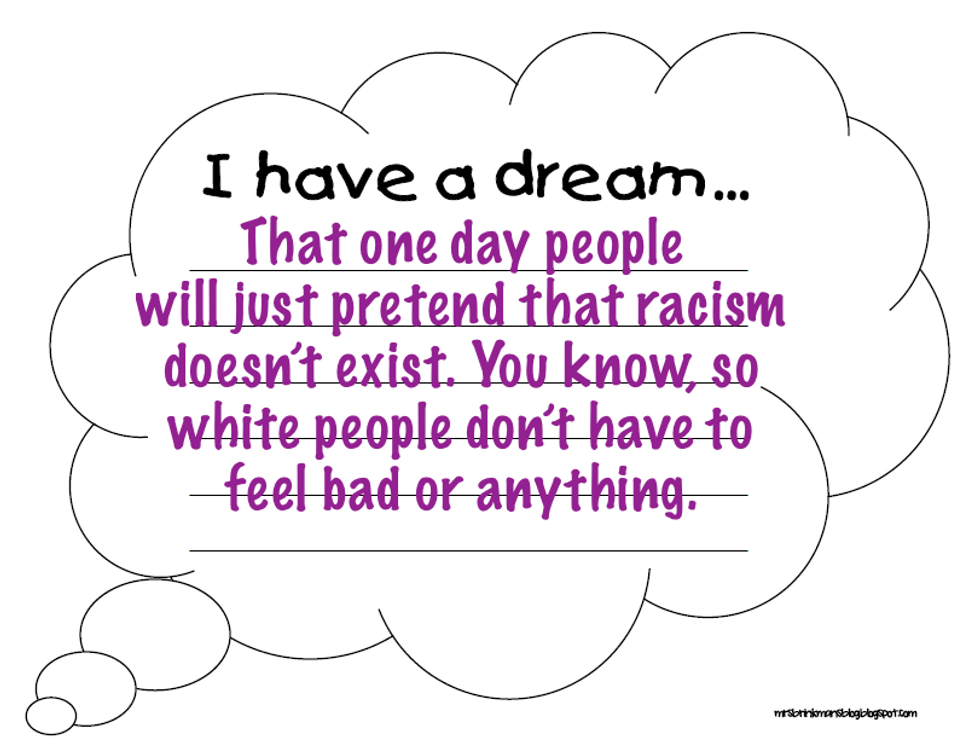 Perhaps one of the most important lessons we all learned last week and this weekend, if we were paying attention to the social media, is that there are a whole lot of white people out there who feel pretty sure that they know what racism is and black people do not. Also, there are a lot of white people out there who are pretty sure they know what Martin Luther King wanted a lot more than black people do. Particularly conservative white people who are very, very, very upset about Black Lives Matter. Which they are gosh darn sure Martin Luther King would have HATED.

One of those white people who knows way more about racism and Dr. Martin Luther King than all the black people is -- SURPRISE! -- one Sarah Louise Palin.

In an interview on “Breitbart News Sunday,” Palin, just like Dr. King's namesake, nailed her 95 theses to the wall, detailing the ways in which black people have wronged her. Firstly, because the slogan excludes "anyone but someone who happens to be a black American in terms of wanting to protect and respect that person’s life." You know, because the appropriate response to hearing about innocent black people being repeatedly gunned down by cops is always "WELL, WHAT ABOUT ME AND MY FEELINGS! DON'T I COUNT? WHERE IS MY TROPHY?!?"

Also, she says, Black Lives Matter protesters are not "protestors" but "thugs" -- which isn't a racist thing to say at all.

Yes, if there was anything Martin Luther King hated, it was black people acting like racism exists instead of just going along and letting white people pretend everything is OK the way it is. His dream, as it were, was simply for black people to stop annoying nice white ladies like Sarah Palin with their incessant complaints of "OH! The police are killing us!" and whatnot. After all, it was Martin Luther King himself who acknowledged that racism didn't exist at all (except against white people), because the Declaration of Independence -- which was written when black people were still slaves -- said "all men are created equal." He also, as we all know, told black people to always check with conservative white people prior to declaring something racist, as they could not possibly be able to determine that themselves. It was also he who implored black people to not complain about white people saying and doing racist things, until they themselves were 100% perfect.

Tragically, it's almost like the Black Lives Matter movement hasn't even considered that Sarah Palin has had some pain of her own. Like how sometimes, she'll go to a store in December, and the store clerk will wish her a "Happy Holidays" instead of a Merry Christmas! Also, there have been times when she's been asked what newspapers she reads.

Palin then did some word salad about how all this complaining about police brutality is hurting cops.

“Consider this atrocity that is going on right now which is the quashing of or thwarting of America’s law and order as exemplified, as worked out, as manifested by that thin blue line, by our law enforcement and men and women in uniform who are protecting law and order in America, the not peaceful protesters who are up in arms against just, you know, the whole kit and caboodle of all law enforcement right now, as we see in Black Lives Matter, is turning our country into such a volatile and scary place, it is part of that fundamental transformation of America that Barack Obama had promised to do to America, that’s what I came at with my perspective is.”

You know, I've got a really good idea! If Sarah Palin does not end up getting tapped for Vice President as I so hope she will, perhaps she can set up a non-profit service in which she and other conservative white people can tell black people whether they are experiencing racism or not, and what Martin Luther King would think about any given situation? Clearly, she feels that they are not qualified to determine this themselves. And, if it is indeed an incidence of racism, how they can handle that situation without hurting Sarah Palin's feelings. I'm sure everyone would find it very helpful, and she should definitely sink a whole lot of money into that.