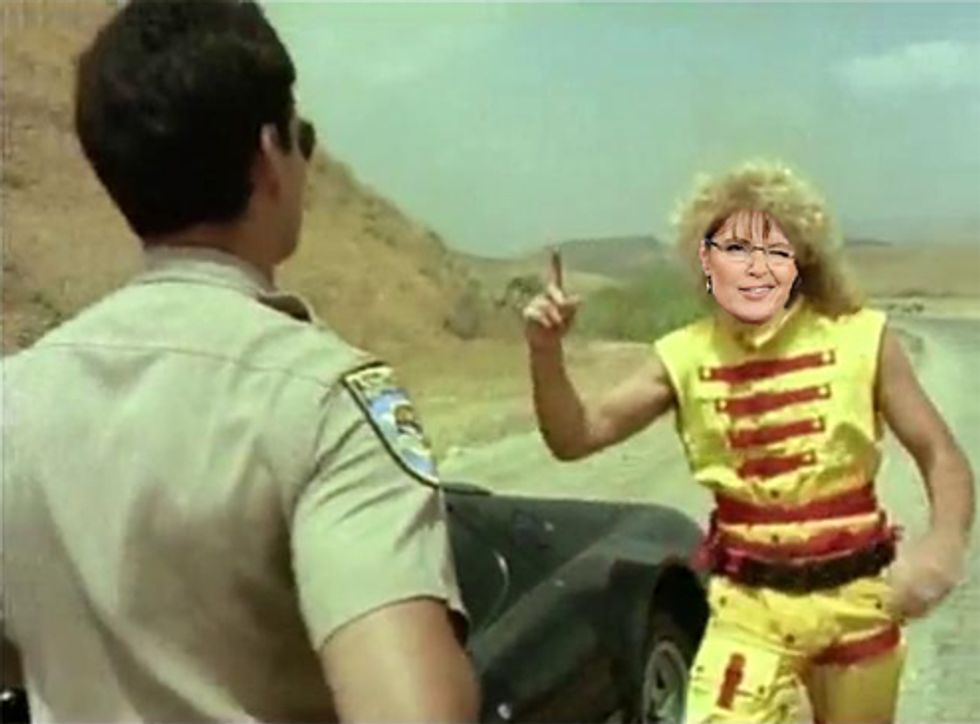 Sarah Palin got into a bit of a whoopsie-daisy in Wasilla, Alaska, recently:TMZ says she got caught doing 63 mph in a 45 zone, and was hit with a $154 ticket, which she'll probably charge to her super PAC as travel expenses. Palin joked to TMZ, "I wasn't speeding, I was qualifying,” possibly for the big Methtown 300.

Palin's explanation for the speeding was also intriguing: "The former Alaska governor claimed Sammy Hager’s [sic] 'I Can’t Drive 55' on the radio caused her to speed up."

This would explain a lot, maybe -- what other songs has Sarah Palin based her life on? Perhaps every time she heard Pink Floyd's "Another Brick in the Wall," she dropped out of college, and she couldn't get along with John McCain's campaign staff because she heard an oldies station playing "Stuck in the Middle With You." Maybe she never had much against Barack Obama until she overheard a TV showing the video for Ugly Kid Joe's "Everything About You."

Warm up your contest-enterin' muscles, Wonkers: Let's write a biography in song of the Quitter From Wasilla, with songs that may explain just how she got to be like she is. Make your suggestions in the comments, and if you don't have a commenting account (what is wrong with you?) you can email your ideas to doktorzoom at-sign wonkette dot com. Remember, we're looking for songs that explain Little Miss Can't Be Right -- we aren't asking you to write a song about her. Winner will get a nice Wonkette tote bag, in which you may tote all the things.

Also keep in mind that Jimmy Buffett's "Why Don't We Get Drunk and Screw" is Bristol's song, not Sarah's.

[TMZ via The Hill]