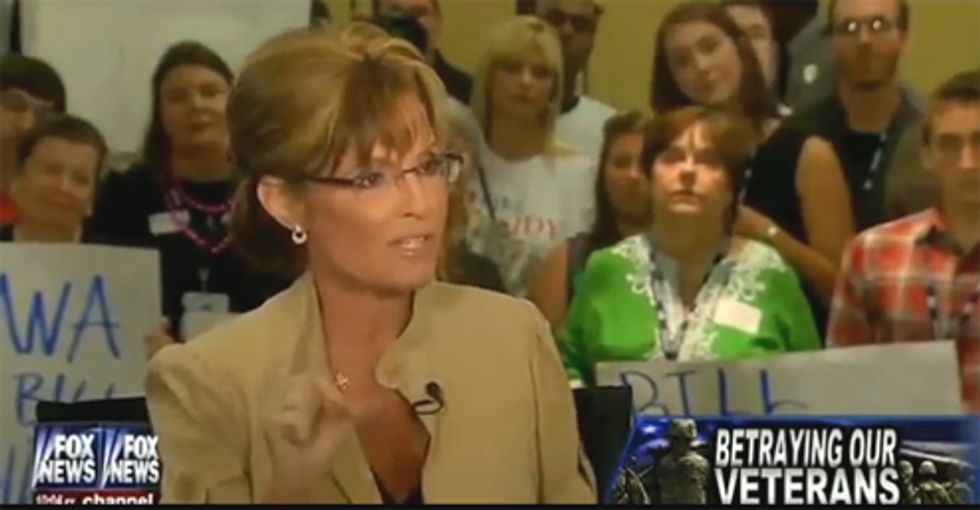 Sarah Palin has given a lot of thought to this scandal at the Veterans Administration, and she has determined, with some help from Sean Hannity, that the best way to describe the V.A. hospital system iswith a lie that she made up in 2009. At the "Republican Leadership Conference" in New Orleans Thursday, Hannity asked Palin, “Is the VA a death panel for many?" The audience roared its agreement, so you know it was a good question. You will never ever guess what Sister Sarah said to that! Do you think maybe she agreed? Let's see what she said!

“That is what government-run health care will result in.” Palin replied.

Hey, you are a really good guesser! Hannity then went on to a completely relevant statistic:

“Our prisoners at Gitmo,” Hannity said. “There is one doctor for every 1.5 prisoners.”

And how many patients per doctor in a private insurance system, Sean? Nah, never mind, we don't need to think about trivia like that. And Palin then explained,

“In many respects, illegal aliens in our country today are receiving better health care, more benefits than some of our troops[.]"”

How true this must be, since so many Fox viewers think it's true.

Follow Doktor Zoom on Twitter. A lot of illegal aliens have better steel-toed work boots than he does. What has happened to America?