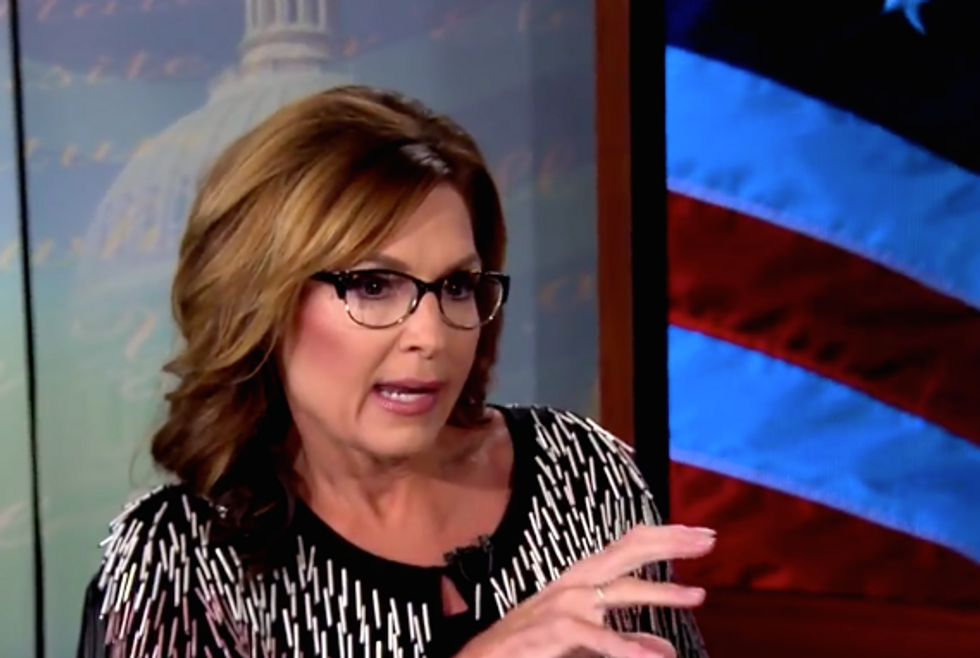 We already know Donald Trump makes Sarah Palin so moist in her granny panty g-string, because of how he is a hero, a gen-u-ine hero just like John McCain, only without the going to war. And we know that Donald Trump thinks Sarah is "tough and smart and just a great woman," and he'd like to tap her in her moosehole -- metaphorically, of course -- and let her be the Secretary of Quittin' Stuff, or maybe even scrawl her name in lipstick on his ballot to be his vice Trump, if we are that lucky.

Now it is time for Sarah to stroke Trump again, so let's barf at that for a few, why not?

Man, he is just getting crucified out there, just for telling the truth. And he's doing a good job of that. He's shaking it up the way it should be. And he's leading other candidates in having to talk about the issues that average every day Joe Sixpack Americans wants [sic] to hear and wants [sic] to talk about.

Not sure Trump is getting nailed on the cross, so much as fellated all over America, but sure, yeah, OK.

Asked whether Palin is open to being Trump's special VP lady friend, she gets all coy winky winky about it, so we can pretend that she might be willing to do the full-time job of running for office even though we know she can't even do the part-time job of saying words into a camera on her own website:

Yeah, she'd be a great female running mate, that Allen West, and would definitely help Trump lock up the pro-torture vote.

Asked whether Palin will support Trump if he gets the nomination, you betcha!

See, I'm all about this ABC thing. Anybody But Clinton. So if he's successful, you know, if anybody -- whoever it is on the GOP side -- we've had seven, eight years of a liberal policy that is turning us into a socialist nation, and that's not what our founders had intended for us. We're headed in that direction, and if we were to elect someone who is part of the problem, creating this socialism, then really there is no hope.

Any examples of all this socialism? You know, besides those checks everyone in Alaska gets from Big Oil, just for living in Alaska? Nah.

Any closing words you'd like to string together as if they are thoughts, Sarah Palin?

I think that liberal media especially so personally invested in Hillary, so admiring of her, that it surprises me -- it would surprise me to think that they would allow anyone to defeat her for the nomination.

Thanks, Mama. We knew we could count on you.