Sarah Palin So Ashamed Of, 'Humiliated By,' Drunken Brawlin' Bristol 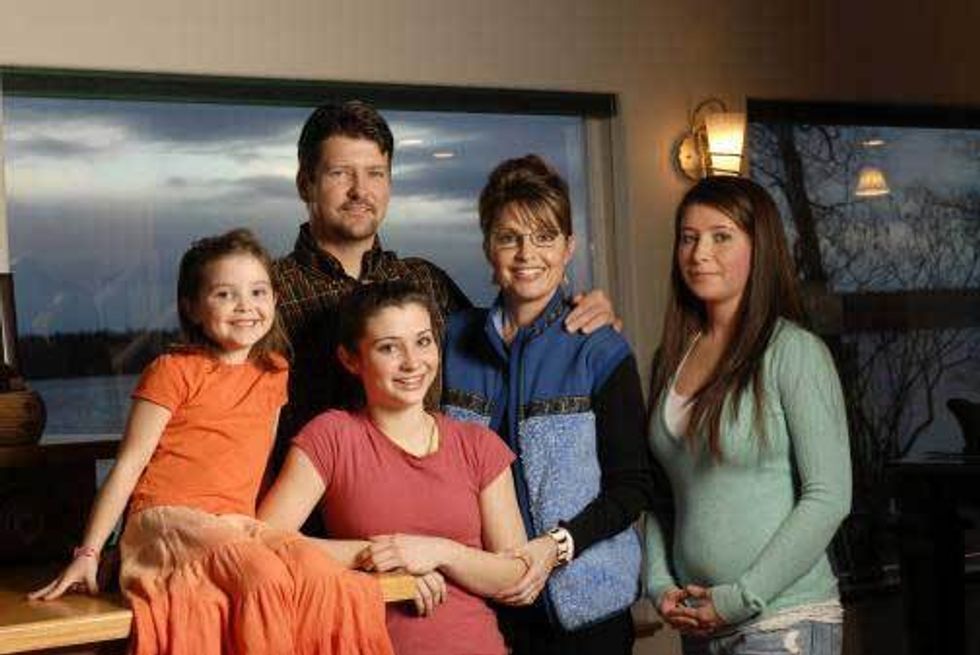 For the first time ever, not including the other time a month ago, Sarah Palin finally speaks on the humiliating drunken #PalinBrawl, in which her drunk-and-barefoot klan of klassy kids who are klassy showed just how klassy they can be. And Sarah, poor dear, is humiliationated!

What happened on the night in question wasn’t funny. It was humiliating and frightening. The broken ribs, black eyes, and messed up elbows and knees suffered by people in our party that night were no laughing matter. Neither were Bristol’s bruises on her arms and leg from being dragged by a man. My kids aren’t proud of what happened, nor are they seeking sympathy by playing the victim card – that’s why they haven’t commented on this for all these weeks. Instead, they had to have faith that the truth would come out, despite those who did the cold-cocking actually using social media to brag, “’bout to get famous!” Screen shots of tweets captured their bold intentions, and they’ve certainly enjoyed the publicity.

Yeah, those other people who are trying to get famous like a bunch of no-class Palins sure are the worst, aren't they? They're nothing like the perpetually failing reality TV stars Bristol and Todd and Sarah and Blerp and Tractor and the rest of them. They just want to be left alone -- at least when they look like a dumb drunken mess anyway, right Bristol?

“I don’t want my face in a picture right now,” she said. “There’s nothing on my face except for beer and makeup.”

No wonder she feels bad. The cops totally did not get her good side!

Sarah's kids might not be proud of their Drunken Thrilla in Wasilla, but Sarah sure is. Or at least she was a month ago. Gosh, can we remember that far back? Yes we can!

I love my Bristol! My straight-shooter is one of the strongest young women you'll ever meet. I have to say this as a proud mama: right up there with their work ethic and heart for those less fortunate, my kids' defense of family makes my heart soar! As you can imagine, they and my extended family have experienced so many things (liberal media-driven) that may have crushed others without a strong foundation of faith, and I'm thankful for our friends' prayer shield that surrounds them, allowing faith to remain their anchor. Thank you, prayer warriors! I love you!

As for those broken ribs and bruises and all the injuries the Palin family and friends suffered, we looked at those photos released by the Anchorage Police Department, and we did not see any bruises or black eyes or also too messed up elbows, but maybe that's just because we are not at the Palins' house, where you can see everything.

Wondering if we actually were cheering on an assault on a young woman -- in which case, we would feel "shame" -- we went back and looked at the police department's report again, and we still must be missing the part where everyone was ambulanced to the hospital for all of those serious injuries. In fact, the one thing we do know, according to Bristol's ghostblogger's blog for Bristol -- which you said we should read, so we did! -- is that Bristol was just fine, in fact.

After this incident, I still had a perfect manicure on all ten of my nails.

But maybe everyone else was super injured, which is why it is not until now at this time being of Americans for freedom that you and Tahhhhhd and the kids have been able to finally speak out about this horrible attack on your persons and, hahahaha, "dignity."

Hey, Sarah, any chance you could turn this into some sort of "war on women" type thing, which you think is a bunch of lipstick on a pitbull, just to make some kind of pointed point type point?

Looking at the reports, it strikes me as bitterly ironic that the same people who tell us there is a “war on women” have no problem laughing at the recording of my daughter crying as she tells police about being assaulted by a man. I’d like to say shame on the media and those on the left laughing at her or at any young woman in a similar situation, but I no longer think they have any shame.

Aw, shucks, if only we'd known that when you said how proud you are of your "straight-shooter" daughter and how your "kids' defense of family makes my heart soar!" you actually meant that Bristol is a helpless victim who was assaulted and defenseless, we would not have made all those jokes about your no-class trashy family starting drunken brawls.* We would have been like, "Oh no, was poor defenseless Bristol assaulted by a mean man? Rally the misandrists! Warrrrr!" We just didn't know how bad it actually was on account of how you told us Bristol can take care of herself just fine, thanks but no thanks.

*We are lying. We totally would have done that anyway.