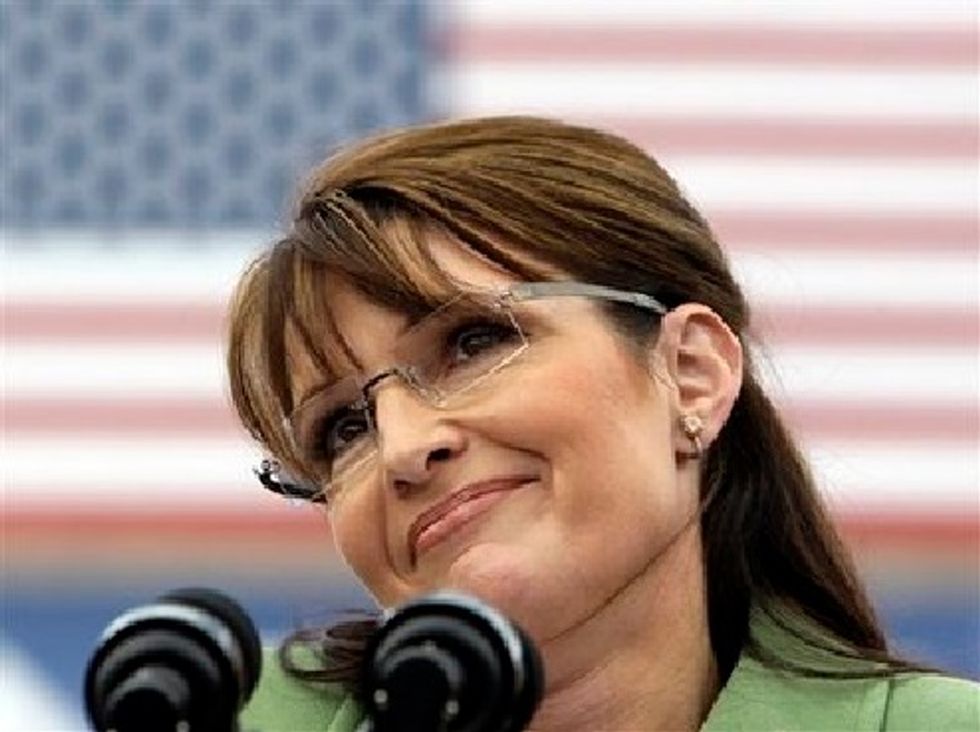 Sarah Palin treated the world to another of her trademarked stream-of-stupidity FacePlace posts this weekend, pretending that when Barack Obama said women shouldn't have to choose between a career and staying home with children because they can't find affordable daycare, he was REALLY saying that women should never choose to stay home with their kids.

Here are the words that Barack Obama said while advocating for his universal preschool initiative: When affordable, quality preschool isn't available:

Sometimes, someone, usually mom, leaves the workplace to stay home with the kids, which then leaves her earning a lower wage for the rest of her life as a result. And that’s not a choice we want Americans to make.

And here's what Sarah said he said:

Obama Declares Stay-at-Home Moms Aren't Worth a Hill of Beans; Says It's a Choice 'We Don't Want Americans to Make’

Damn that Obama and his war on motherhood! He doesn't want any woman to choose to stay home, exactly like he thinks nobody built their own success! And then we get a whole bunch of paragraphs about how the thing Obama didn't say is a Very Bad Thing:

Well that just takes the cake. Sure, Obama's latest shot across the bow in his own “War on Women" is easily deflected by women like my friends and me testifying to the most precious, irreplaceable seasons of our lives when we were BLESSED to be "stay-at-home moms" (though I don't remember any of us actually "staying home" in those busiest times of our children's lives), but Friday's jab deserves something right back nonetheless. On behalf of former and current stay-at-homers, including my girlfriends who still get together to bake cookies for the bake sale (see photos in my kitchen above), and volunteer to coach kids ball teams, and man the church's food bank, and entertain latchkey kids, and all that other obnoxiously "housewifey" stuff, the President needs to be spanked.

Gord lord, what is it with wingnut ladies who want to hold down Barack Obama and spank him? But then Palin starts in with the alliteration, and somehow it's also the fault of the decade when Barack Obama was riding bikes in Hawaii (when he wasn't eating dogs in Indonesia):

You have a way of arrogantly demanding that we fall in line with your sad opinion of today's American woman. It seems you'd shackle us by your snobbish shunning of one traditional lifestyle choice while taking advantage of power to manifest your liberal view by manipulating public opinion and resources to diminish moms who put career on hold to raise a family. You are really messed up. And you're so 1960's.

Yes, the 60's are calling and they want their ardent yet narrow sexist confines back. See, you just set the women's movement back a few decades, and I think it's hilarious because for being the smartest man in the room, you ain't too smart.

We aren't so sure he's that stupid, really. For one thing, we don't recall him completely ignoring every sentence leading up to a string of words and then twisting them completely out of context. Maybe that's part of his Harvard elitism. But Sarah's just warming up. See, Obama actually hates women having any choices at all, because he is such a sexist pig (with lipstick on it). Consider all these examples:

[He's tried to] convince America that only guys in government should control birth control -- since free women aren't capable in a free market of walking down the drug store aisle to find it ourselves. Add, too, your shameless silence on the deplorable human rights violations in countries you'd befriend even though women are treated mercilessly there. Seriously, not a peep from atop your soapbox about the common practice of radical Islamist men going all jihad, literally, on females who'd dare cross their male "masters"?

Yeah, Obama, why are you so in favor of keeping women down? Also, instead of bombing all those oppressive Muslim men (we have special bombs that won't kill any women), you just spend your time "playing hoops... with the guys." Nobody hates women like that misogynist, Barack Obama, who doesn't want any women to ever choose to care for their children. Also, Michelle shouldn't tell women what to feed their children, because that's sexist too, assuming women aren't smart enough to make their own burrito choices.

It's vintage Palin, and while we're tempted to thank John McCain one more time for bringing her to the national stage, we wouldn't want to be sexist, so we'll just give Sarah Palin credit for nominating him as the top of her ticket.