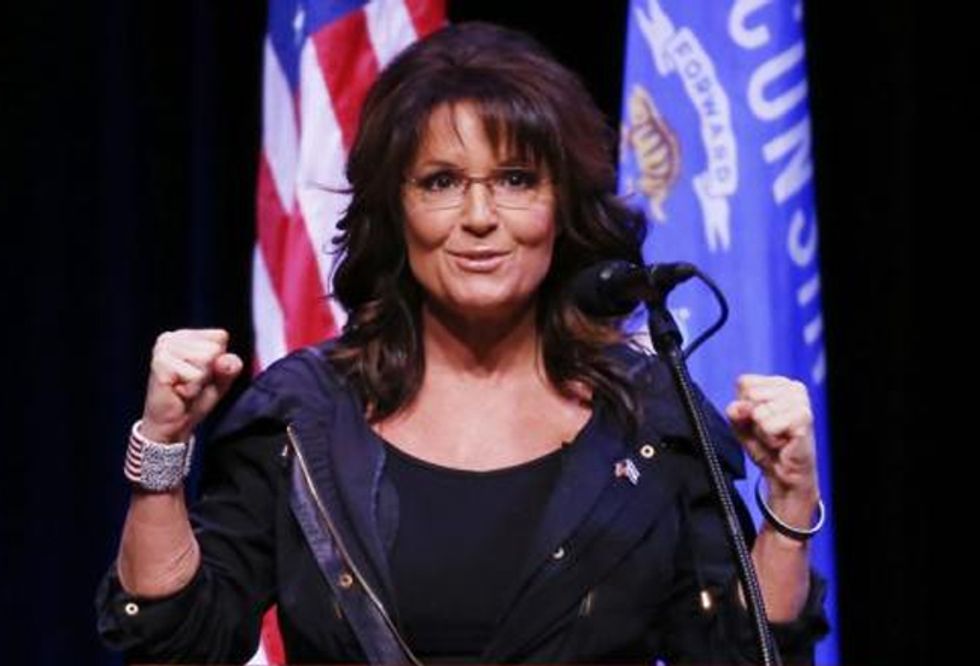 As we all know, kids today love the rap, what with all the hippetty, and in many cases, the hoppetty as well, not to mention the mad rhymes. So it should be no surprise whatsoever that Sarah Palin, her finger, as ever, on the pulse of the culture, should use a reference to that popular musical genre Monday in a Faceplace post (and tweet) taking a shot at the failing New York Times, which is so very failing!

Yes, we'll get to the misspelled headline, too. Be patient.

Now, this particular bit of wordplay is not entirely without controversy, as it is adapted from a 2005 song by Kanye West and Jamie Foxx called "Golddigger," whose actual lyrics proceed thusly:

Now I ain’t saying she a gold digger

But she ain’t messing with no broke niggas

Apart from her careful elision of the offensive epithet, the most notable thing about Ms. Palin's witty reversal of the second line is that it renders the couplet utterly meaningless -- one might well observe of an actual golddigger that she conscientiously eschews associations with any penurious fellows, but it makes no sense whatsoever to suggest that a newspaper's alleged flirtation with financial ruin makes it a "golddigger" in any sense of the term. Not that we really expect Sarah Palin to appreciate a subtle art like rap lyrics.

Besides, with her own PAC having spent $138K on various "administrative" expenses, $865,000 on "fundraising" and only $67,500 on contributions to candidates in 2016, we're not sure Notorious Q.U.I.T. isn't the broke one here anyway. (For a more detailed look at SarahPac's expenditures (SO MUCH first class travel!), go to the FEC and drink it straight from the tap!) How much is left in SarahPac's kitty, after she spent $2.1 million this cycle? $99,000. Get busy, Sarah! We're counting on you!

The story Palin links to at Young Conservatives isn't exactly about how the New York Times is on the verge of financial collapse, either, although that headline about the "announcement that could effect [sic] hundreds of employees" sure tries to suggest the paper is facing tons and tons of layoffs. You see, the Times announced last Friday that it was going to redesign and consolidate office space in its huge Manhattan headquarters, freeing up eight floors of the building to rent to other businesses.

Or as those wits at Young Conservatives put it:

Now, the Times is set to vacate eight whole floors in its headquarters hoping to generate “significant rental revenue.”

In other words, we broke!

The actual memo from publisher Arthur Sulzberger Jr. and President/CEO Mark Thompson doesn't quite sound so gloomy as all that; instead, it suggests the company is reorganizing the floor plan to reflect how journalisming gets done in our New Digital Era, which is a bit different from when the Times moved into the building in 2007:

The current way we have configured our office makes us slower and less collaborative. It is also, frankly, too expensive to occupy this many floors when we don’t truly need them.

We’ve made the decision to consolidate our footprint across the building to create a more dynamic, modern and open workplace, one that is better suited to the moment. We’re planning significant investments in a redesign of our existing space in order to facilitate more cross-departmental collaboration.

We expect a substantial financial benefit as well. All told, we will vacate at least eight floors, allowing us to generate significant rental income.

Still, a paragraph discussing the fact that about 400 employees will have to move to temporary office space while the renovations are being done in 2017 has the Young Conservatives simply giddy with the prospect that those stinky liberal biased journalists will all be fired -- or at least inconvenienced by having to move their stuff to temporary quarters for a while:

When you alienate half the nation with liberal reporting, you pay the price. In this case, conservatives won’t pay the price!

Americans want reporters who are unbiased. Is that so much to ask?

If major publications continue to trod [sic] the progressive path -- like The Arizona Republic -- they’re going to pay a hefty price (and so will their employees).

Yup. Newsroom's being rearranged and the Times will bring in some money by renting out eight floors of prime office space in Manhattan. The panic is practically palpable.

Now, if If Donald Trump reorganized eight floors of Trump Tower to bring in more rental income, he'd be hailed as a genius, because he's got what plants crave.

Also, "trod" is past tense, you numpties. You meant "tread." Not to mention "Affect" in your headline.

This has been your quarterly reminder that Sarah Palin is broke. Please send money.