Sarah Palin Was Right About That Putin, Rootin' And Tootin' All Over Ukraine 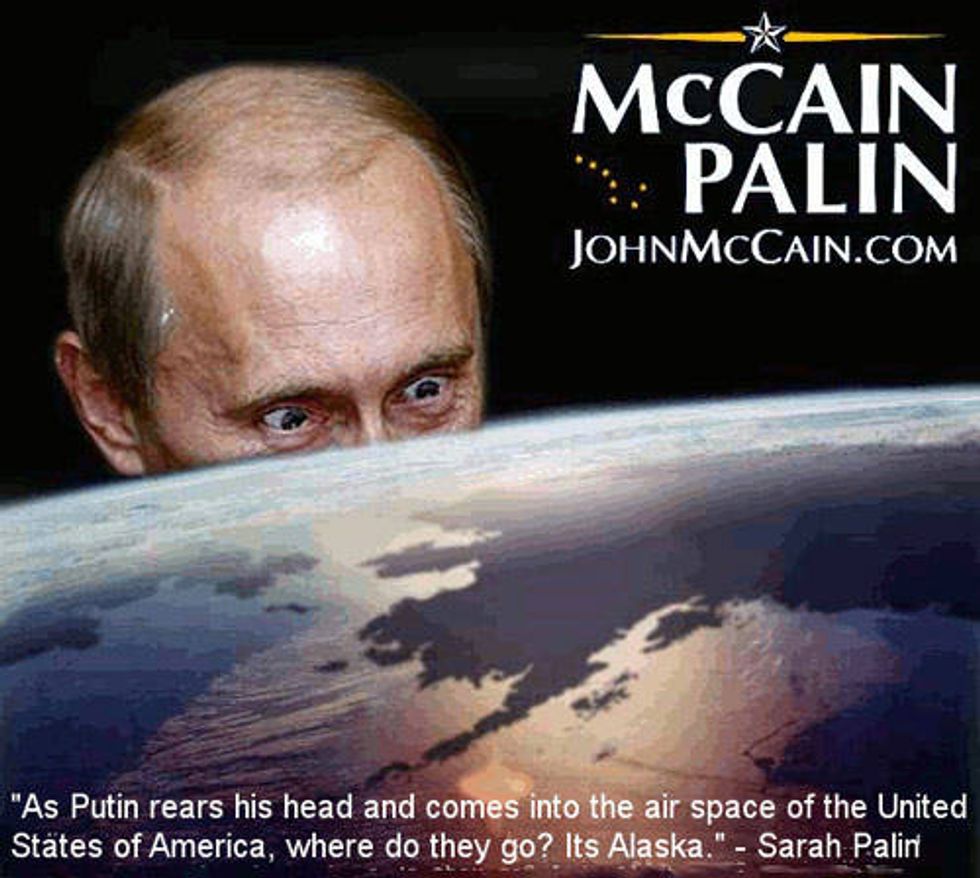 One day, 17 or 8 or 92 years ago, when wise and beneficent Leadership Shower Sarah Palin was first becoming the national Thought Leader we know and know today, she said a thing, and that thing was that Barack Nobummer was such a weak homosexual girly man (paraphrase) that Vladimir Putin would do sex in his bottom (Nobummer's bottom) and then he would invade Crimea. That is, Putin would invade Crimea, obviously, since to invade Crimea you have to BE a MAN.

Well Sarah Palin would like you to know that she was right, IDIOTS, and who is even laughing now! Also, she added, "flimmer globbin salumission anye enya rumi raffi tinkywinky dipsy laa-laa po spiritu christo jeanne claude OW!" because that was when the copperhead that she was handlin' for Jesus struck.

Yes, I could see this one from Alaska. I'm usually not one to Told-Ya-So, but I did, despite my accurate prediction being derided as “an extremely far-fetched scenario” by the “high-brow” Foreign Policy magazine. Here’s what this “stupid” “insipid woman” predicted back in 2008: "After the Russian Army invaded the nation of Georgia, Senator Obama's reaction was one of indecision and moral equivalence, the kind of response that would only encourage Russia's Putin to invade Ukraine next."

Sorry you got a gay homosexual girly man preznit, Amurca, if only you had chose the crazy person flying around by the seat of his pants, and then crashing the plane, and then getting a new one and flying around by the seat of his pants somewhere else, always looking for a new country to yell at, then this might not have happened, or it would have happened seven years sooner, it is not like any of us has a crystal ball right except maybe Sarah Palin.

And you thought Christine O'Donnell was a witch!

Like Snipy told you already, foreign policy is not really our "thing" here at le Wonk, we mean, maybe some of us are best at it than others of us, but me, your Editrix, I have been known to mix up Marshall and MacArthur, IN PUBLIC, because of how I don't really know who they are, and the only "foreign policies" I really know much about are the ones Thought Leadered by Oliver North, because of how that was a domestic crime as well. Also, I'm pretty up to date on how Dana Rohrabacher wants to gay marry the Taliban. (A lot. He wants to gay marry it a lot.) And maybe one or two other things, like "is Tony Blair banging Rupert Murdoch's wife" (answer: not any more, that we know of!), that is foreign policy right?

But let's take Sarah Palin at her word, that she foresaw ol' Pooty Poot gettin' all up in Crimea and Barack Obama's rectum, because to do otherwise we would have to go read a bunch of things by people what know, and also we would have to form an opinion on John Kerry's aptitude for Secretary of Stateyness, when really we'd rather just have some fact-free feelings. You know, like Peggy Noonan seeing yard signs instead of polls.

So we will just take a moment to say that we too foresaw a Thing once, and we foresaw it pretty darned rootin' tootin' good, and if John McCain had listened to us writing about the coming housing crisis at OC Weekly in January 2006, and how everyone's balloon payments were going to come due at just the same time, and how we were all going to then Be Fucked, maybe he wouldn't have had to suspend his campaign to try to get Sarah Palin out of the debates. Because of how she is an embarrassing idiot. The End.