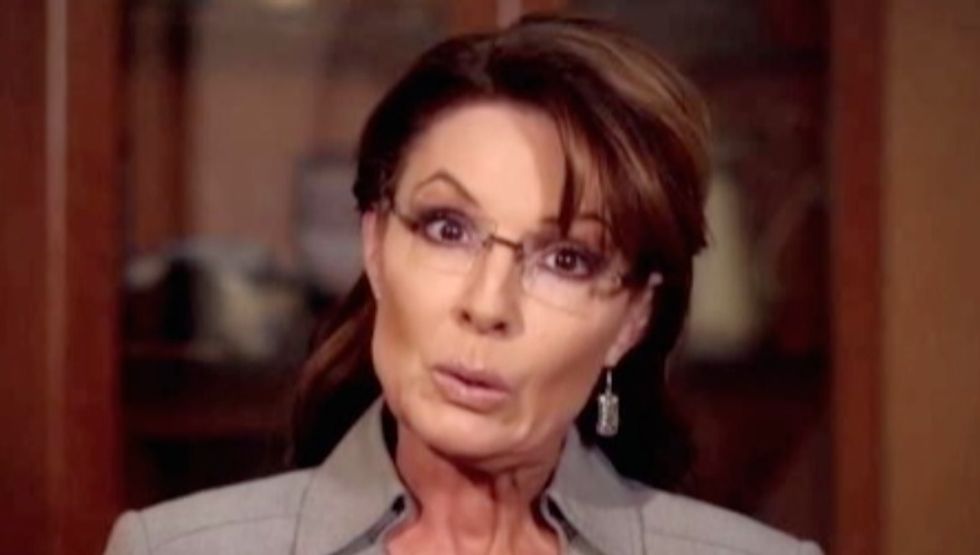 She will splain why you are incorrect.

Sarah Palin is a planner. Do you know how you're going to be grifting off your mouthbreathing fans in the fall of 2017? Sarah Palin does, dontcha know, because she's got #billz to pay. And Sarah knows, from all her times disputin' whether it's Todd's turn to sweep the caribou dooky off the front stoop, or whether Bristol's still a virgin since all the times she got preggertastic only happened because of Jesus or Boone's Farm, that it's time to take her mediatin' talents to a bigger audience.

Yes, that's right, she's going to be a TV judge:

Move over, Judge Judy. There's a new TV courtroom judge coming to town – and it's none other than former Alaska Gov. Sarah Palin.

The onetime vice presidential candidate has been tapped to preside over a new reality court show that would premiere next year. She signed a deal in February with Montana-based production company Warm Springs, a source close to the process tells PEOPLE.

"It's a production deal," the source explains. "What happens next is she'll meet with stations, make a pilot and sell it."

We see a problem with this immediately. "Meet with stations, make a pilot and sell it" is a quote that has THREE action verbs in it, and Sarah Palin is not the biggest fan of Doing Things. But hell, maybe she has the get up 'n' go to squeeze into a tracksuit and word salad her way through the motions of at least setting up her grift.

So let's see, what's a good name for this show? "Drunk Justice"? Unless that's the name Bristol's saving for her next moonshine-induced "little miracle." No? Splendid, we'll go with that. Why, you may ask? Oh, because she sure seems to be drunk a lot! Like A LOT, A LOT.

[contextly_sidebar id="UuH4gKAGM7coNx3UWmhPbLAjQJJxcyDG"]And since we all know those judgy time court show fungasms are super fake, just like all of Sarah Palin's various careers, this will be fun for the contestants, we mean litigants, also too! If they lose, she can award them "ALL OF THEM, KATIE!" and they can get showered with moose roll-ups and whatever wedding gifts Bristol wasn't classy enough to return. If they lose, they have to read the Bible Sarah wroted all by herself and memorize it.

[contextly_sidebar id="UytYg8JNDQE3O1mtVKicVfcP52CZeLUD"]But on the other hand, and now we are talking to the TV executives here, maybe this isn't such a great idea. Because really, she does tend to quit things halfway though. She quitted being governor; being tour-busser-in-chief; being the star and producer of the Sarah Palin Channel; hell, she doesn't even really show up to Donald Trump rallies, to support the candidate she's supposedly so excited about, but then again her family has been going throughsome things lately so maybe her well-known work ethic will be intact by the time this endeavor gets off the ground.

[contextly_sidebar id="VfckuxuN4QGdgHcl7YD4PuCkw4n8ECVB"]This will be super. Sarah Palin will be the best TV judge Wasilla has ever whelped. Or maybe she won't, because Bristol will get knocked up again and Sarah have to call in dead to work, so she can finally have that talk with her daughter about how babies are made. But maybe she won't fail-quit in the middle this time? Just kidding yes she will, the end.