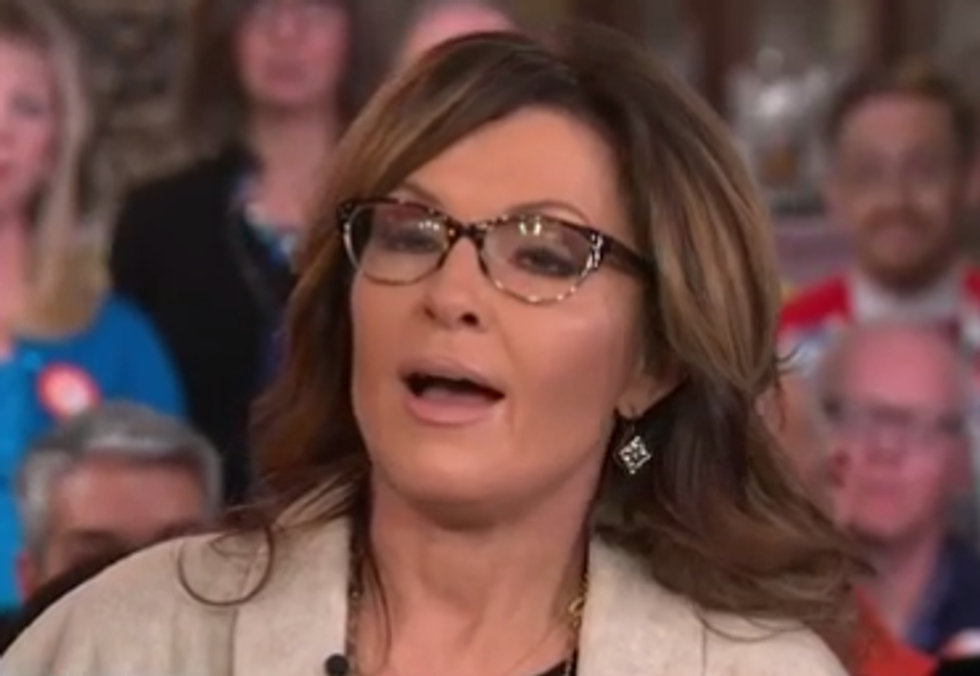 Dammit, Sarah Palin. Wonkette defended you. We said that in the great 2016 Twitterspace War between the Republican former governor of Alaska and rapper Azealia Banks that FORSOOTH, IT IS NOT COOL BRO to get on Twitter and say Sarah Palin should get gang-raped by a bunch of big black guys. And it's still not! And that is what Ms. Banks did! SO WRONG!

Sarah responded on Facebook about how fucked up it was, and we agreed! Then Azealia apologized on Tumblr, because why not add another social network to the internet feud? But now that Tumblr apology is deleted, sadface. (Full text of apology preserved here for the historical record, happyface!)

Maybe that is why Sarah is threatening legal action against Azealia, for saying mean things on Twitter:

Palin told PEOPLE exclusively in a statement that she will take legal action against Banks "on behalf of all reasonable women of every age, race and political leaning."

"I've had enough of the unanswered threats and attacks against my family and me," Palin said of Banks' NSFW social media suggestion that the former governor should be sexually assaulted. "So, for the first time I'm going to enjoy the only retribution some protected 'celebrities' seem to understand – I'm suing Azealia Banks and can't wait to share my winnings with others who have gone defenseless against lies and dangerous attacks far too long."

It's a class action suit? Against Azealia Banks? GO ON.

"Why is it if anyone looks at some liberal women the wrong way they can yell "RAPE" and ruin peoples lives (the Duke Lacrosse team, anyone?), but when serious violence is threatened against someone not of their political ilk, no one bats an eye," Palin says.

WONKETTE BATTED AN EYE, MUST CREDIT WONKETTE! Also, we are very glad to see that Sarah Plain And Grifty has immediately seen her opportunity to cash in and also too complain about how it's ALL the liberals' fault, as opposed to one kinda unhinged hip-hopper who decided to be an asshole.

Palin's statement continues, "First, to get politics out of the way here, it's reported that I 'really shouldn't mind' Azealia degrading, dangerous calls for a woman to be raped because she's supposedly 'some kind of Donald Trump surrogate' or supporter, as am I. I'll speak for Mr. Trump on only one issue, and that's that he denounces Azealia's endorsement and her pro-rape, anti-woman stands. And if I'm wrong on that denunciation, then Mr. Trump isn't who I thought he was.

Drop the final moose turd, Empress Sarah Of The Northern Lights, tell us how this is about reverse racism against white ladies, and also how you are going to use this to incite chairborne wingnut fury:

[L]et's be honest here: if a white girl were to say what this black girl is saying, the screams for the entire white population's head would be louder than the nonsensical rap that Azealia spews all the way to the bank. The white girl would probably be locked up.

Oh god. Ten seconds until she blames this on Obama. And Beyoncé. WHEN WILL OBAMA AND BEY APOLOGIZE FOR WHAT THEY HAVE DONE?

The internet is so fucking stupid sometimes.