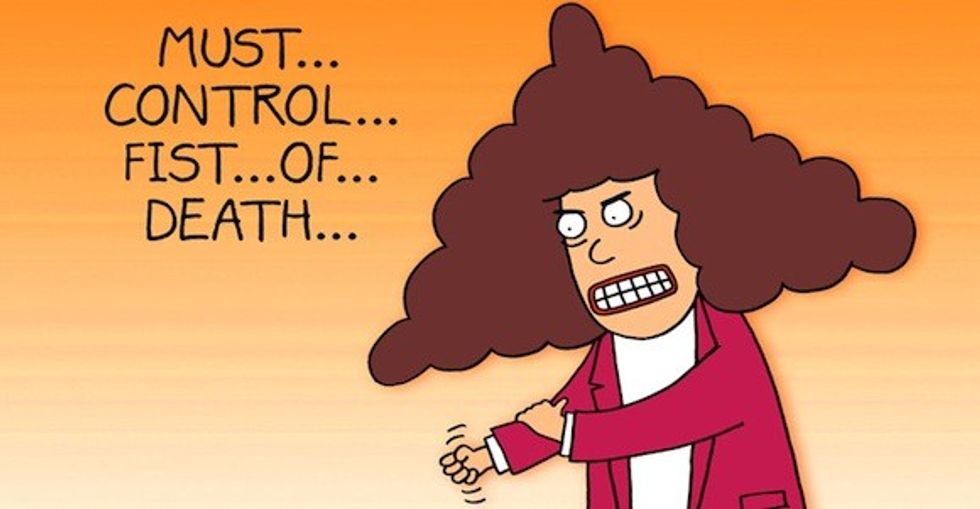 Scott Adams, the guy who does the Dilbert comics and often likes to share his views on things like how women cause terrorism by not boning enough future terrorists, has decided whom to endorse as the next president of the United States! And shockingly, though he is in deep smit with Donald Trump's sexxxy persuasion skills, he has decided to endorse Hillary Clinton! Why? Because he is fairly sure that if he does not, he will be assassinated by Clinton supporters!

Why? Because Clinton has being going around saying that Nice Donald Trump is A HITLER.

This past week we saw Clinton pair the idea of President Trump with nuclear disaster, racism, Hitler, the Holocaust, and whatever else makes you tremble in fear.

Now, he thinks this is a tactic that will work out well for Clinton, unless it incites a race war, and also make people think it is OK to murder Nice Donald Trump ... and anyone who thinks he has great persuasion skills! PEOPLE LIKE SCOTT ADAMS HIS VERY SELF!

The only downside I can see to the new approach is that it is likely to trigger a race war in the United States. And I would be a top-ten assassination target in that scenario because once you define Trump as Hitler, you also give citizens moral permission to kill him. And obviously it would be okay to kill anyone who actively supports a genocidal dictator, including anyone who wrote about his persuasion skills in positive terms. (I’m called an “apologist” on Twitter, or sometimes just Joseph Goebbels).

If Clinton successfully pairs Trump with Hitler in your mind – as she is doing – and loses anyway, about a quarter of the country will think it is morally justified to assassinate their own leader. I too would feel that way if an actual Hitler came to power in this country. I would join the resistance and try to take out the Hitler-like leader. You should do the same. No one wants an actual President Hitler.

WOW! How mean of Hillary Clinton to say so many inflammatory things about Nice Donald Trump! Things that will make people think killing him is justified! Without a care for his safety or for the safety of Scott Adams! Why can she not be civil, as the Right has been throughout President Obama's time in office? All they ever said was that MAYBE President Obama was the anti-christ, or Satan, or was trying to take their guns away so he could do tyranny to them! Or that he was a Secret Muslin who was not even born here and wanted to make us all live under Sharia Law because he is definitely in cahoots with the Muslim Brotherhood. Nice, not at all inflammatory things like that.

Naturally, Scott Adams has his own safety to think of, as well as the well-being of the tens of people who still read Dilbert comics, and he knows that Trump supporters would never be violent towards anyone, so he is going to "endorse" Hillary Clinton 4 Prez!

So I’ve decided to endorse Hillary Clinton for President, for my personal safety. Trump supporters don’t have any bad feelings about patriotic Americans such as myself, so I’ll be safe from that crowd. But Clinton supporters have convinced me – and here I am being 100% serious – that my safety is at risk if I am seen as supportive of Trump. So I’m taking the safe way out and endorsing Hillary Clinton for president

He still thinks Trump will be our President, because of his awesome persuasion skills, but if endorsing him means getting assassinated, Scott Adams says NO THANKS!