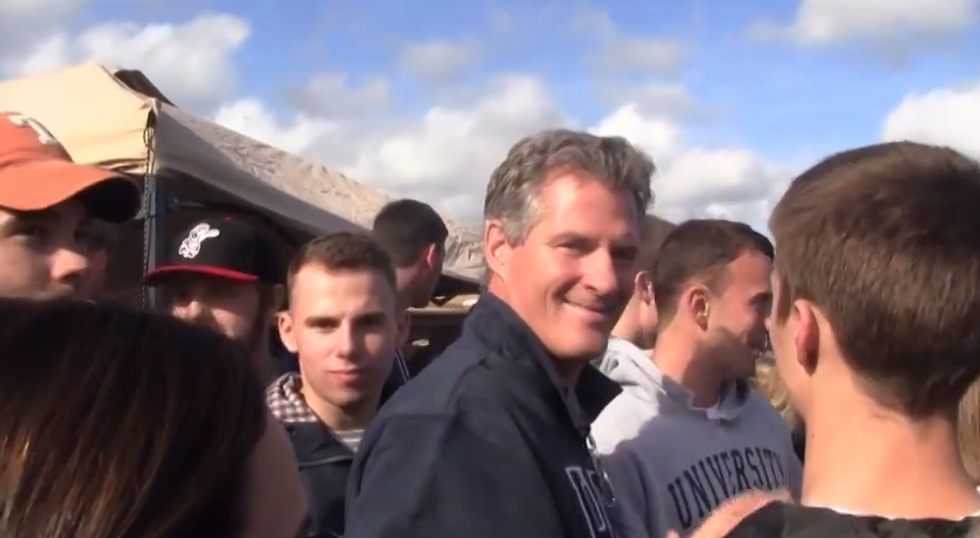 Republican Scott Brown, the former senator from some dumb state that doesn't matter because he's always been a "phony from New Hampshire," is a Very Serious Candidate. He only wants to talk about Very Serious Things. No matter how many times Democratic incumbent Sen. Jeanne "She's So Mean" Shaheen tries to talk about issues that don't matter -- like Brown's voting record and dumb chick stuff, which no one cares about, DUH -- he is trying to focus on the things he is trying to focus on. When he was reminded again (so annoying!) that Shaheen has accused him of not actually being pro-choice because he is actually not pro-choice, despite his attempts to pretend that he is, Brown gave this Very Serious Response:

Is that what we’re arguing about? Who’s more pro-choice than the other? Isn’t that sad? How about talking about the things that we’re talking about -- the economy, our energy prices going up, and a whole host of other things.

Actually, no one is really arguing about it, because there is no argument. Sure, he's called himself "an independent pro-choice Republican," but Brown has a solid record of supporting bills to restrict access to abortion and birth control, which is kind of the exact opposite of being pro-choice. That's not really disputable, unless you're Scott Brown, and you're desperate to convince the lady voters of New Hampshire -- who are all heroes! -- that you do too heart the ladies, because you live with a house full of 'em and everything.

This is Brown's new favorite line of defense: insisting that he's talking about the issues people really care about, while Shaheen blathers on about irrelevant things like reproductive rights and equal pay. So when he's not being distracted by that dumb chick stuff, what is Brown focused on?

Hanging with the cool bro kids these days. On Saturday, he kicked it with the College Republicans at the University of New Hampshire, who were having themselves a tailgate party, where the former centerfold fit right in.

In video posted by the New Hampshire Democratic Party, as Brown walked through the sea of tailgaters, there were shouts of "F**k Jeanne Shaheen!" and "Elizabeth Warren sucks!" referring to the Democrat from Massachusetts who unseated Brown from his Senate seat in that state in 2012.

The language became even more graphic at points, with one man shouting "F**k her right in the p***y" (00:04 in the video above), although it wasn't clear if he was referring to Shaheen or Warren. At 01:07 in the video, a man also appears to refer to Shaheen as a c**t.

We don't mean to quibble with Brown, since he is an expert on the ladies and all, but we're wondering if the citizens of New Hampshire think talking about who is a cunt and whose lady parts need to be fucked is really what voters care about. We're also wondering what giving free beer to co-eds has to do with the economy and energy prices.

Sure is hard to understand why that pesky gender gap won't go away, isn't it? Not that it matters, since Brown has said that's not an important issue.

Please give your beer money to Sen. Jeanne Shaheen, so she can make sure Brown has lots of free time to booze it up with his college bros come November.