Scott Pruitt Doesn't Need You Guys. All He Needs Is This $43,000 Phone Booth And 'CHOCOLATE FREEDOM'! 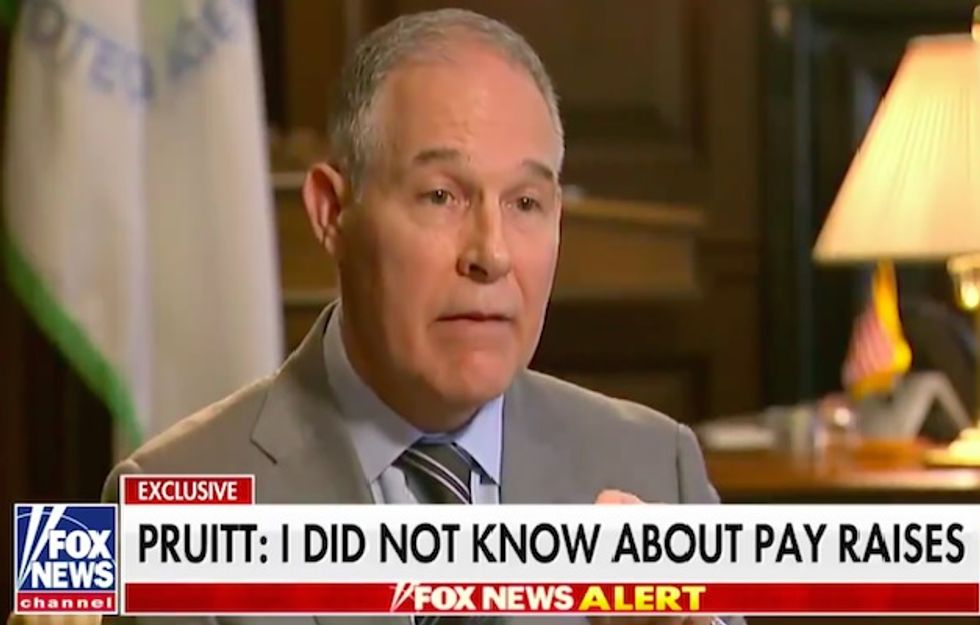 Narrator: He was, of course, lying.

More big staff departures at the Environmental Protection Agency, of the sort that might remind one of the old expression about rats and ships, were it not for the fact that in Trumpland, the rats are all running the place. Two of Scott Pruitt's top aides, both of them part of the Oklahoma mafia he brought to Washington, resigned yesterday. And not just any old aides -- they were the very folks for whom Pruitt had arranged big raises, scheduling director Millan Hupp and senior counsel Sarah Greenwalt.

According to one top EPA official, the 26-year-old was “tired of being thrown under the bus by Pruitt,” and weary of seeing her name constantly appear in headlines about the agency. Officials began drafting her resignation paperwork on Monday morning, just after portions of her congressional testimony had been made public.

[wonkbar]<a href="https://wonkette.com/624938/epa-spokeswoman-liz-bowman-really-making-name-for-herself-as-yoooge-dick"></a>[/wonkbar]Plott's report got more attention than usual than the average Trumpworld resignation story, thanks to the EPA's continuing tradition of being really good at PR. When Plott made the routine call to the agency for comment on the resignation, she got precisely the response you'd expect from the agency whose comms tone was set by the great Liz Bowman. Instead of commenting on a routine, truthful report, spokesperson Jahan Wilcox told Plott, "You have a great day, you’re a piece of trash." Oh, yes, and Bowman herself resigned last month. She clearly left a legacy, though: Everything's fine, fuck you.

The other aide who jumped ship yesterday, Sarah Greenwalt, didn't manage to get quite such a trollish sendoff from her former colleagues, but she was a central figure in Pruitt's wide world of grift:

[Greenwalt] also worked as Pruitt’s general counsel in Oklahoma, advised the EPA chief on a wide range of issues and traveled widely with him domestically and nationally as he met with industry officials and promoted the Trump administration’s goal of reversing many Obama-era environmental regulations. She found herself in the spotlight earlier this year after she briefly received [a] 52 percent raise, before Pruitt reversed the decision amid public outcry.

While in any sane world, all these departures might suggest Pruitt is definitely on his way out this time, his political doom has been pronounced by too many pundits to really mean anything. He's dismantling environmental safety, helping beautiful "clean" coal, and Donald Trump took the opportunity yesterday to praise what a tremendous job Pruitt was doing -- not that it really means anything:

"EPA is doing really, really well. And you know, somebody has to say that about you a little bit," Trump said. "EPA is doing so well...I think people are very happy with the job that's being done at the EPA."

Of course, there's even more Pruitt stupidity since the last time he said something incredibly stupid. On Wednesday, Pruitt cheerfully dismissed the idea there might be anything ethically iffy about sending an aide out to find a Chick-Fil-A job for his wife, because only America-haters would ever have a problem with such a thing, because "with great change comes, uh, opposition," as he explained to Nexstar reporter Jessica Smith:

I asked Scott Pruitt a quick question about the reports he tried to help his wife become a Chick-fil-A franchisee.

Besides, his wife is an entrepreneur, dammit, and that makes it OK. Plus, they were doing it for Jesus, and tasty chikin:

I love, we love, she loves, we love, we -- Chick-fil-A is a franchise of faith and it’s one of the best in the country. That’s something we were very excited about.

And if you atheists are going to question a man and his wife's dedication to Jesus, chicken, and verb conjugation, well then good day to you.

Oh, yes, and we also learned yesterday that Pruitt has been treating himself far more often than is considered appropriate at the White House mess, which in this case is not the usual state of affairs in the West Wing but an exclusive eatery run by the Navy for White House staff in the basement, next to the Situation Room. It's also open to cabinet members, but it's not primarily there for them. So after Pruitt kept showing up to get fancy-time lunches at discount prices (for DC at least), a White House briefer reminded department heads in a meeting that the facility is intended to serve WH staff, not as a daily hangout for cabinet members. Pruitt nonetheless not only made the several-block trek frequently (no doubt in a motorcade with sirens blaring) and even invited lobbyists from Oklahoma to join him.

[They partook] of a dessert called “Chocolate Freedom” on multiple occasions. As POLITICO reported in January 2017, the dish — a molten cake made with imported French chocolate that must be ordered at the beginning of lunch because of the baking time — was also popular among Obama administration staffers on their way out the door.

We're not sure where this one falls on the Pruitt Scandal Scale. Sure, it reinforces the image of Pruitt as a grifty bastard who's out to wring every advantage possible out of whatever time he has left in Washington, but if he weren't getting relatively cheap eats at the White House, he'd certainly be going out to lunch at far pricier places like his favorite French bistro, le Diplomat, where a plain old burger is 17 bucks, compared with $6.95 at the White House mess. Pruitt frequently complains there's no cafeteria at the EPA, and the man has to eat, right?

And now he doesn't even have a scheduler to assign the task of preparing him an elegant picnic lunch each day!