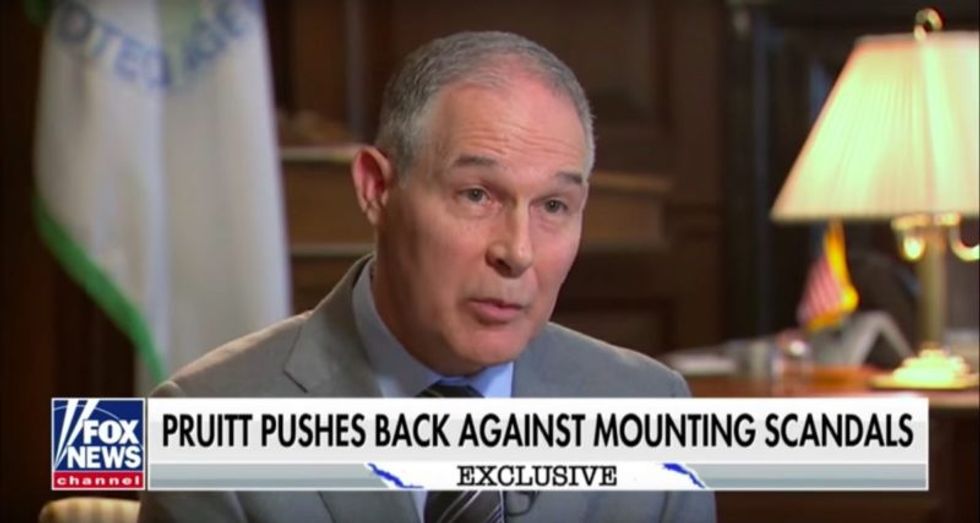 We don't even want to think about who or what he mounted.

What with all the Donald Trump is a crazy person and so is his dumbass lawyer news this week, you may have missed the latest twists in the saga of Scott Pruitt, EPA Overlord. There are many! Most of them appear to have come from the EPA's former deputy chief of staff, Kevin Chmielewski, who was shitcanned a while back, even though he was a Trump-appointed True Trump Believer from the 2016 campaign. Chmielewski had to go, because he objected to some of Pruitt's luxury travel arrangements and blocked Pruitt's attempt to join a Jet of the Month Club for his personal travel. Well! In one of those strange bedfellows things that can occur in Washington -- especially if there's a $50 a night room involved -- five Democratic lawmakers (two from the House, three from the Senate) wrote a super-angry letter to Pruitt demanding answers about numerous matters Chmielewski brought up in interviews with congressional staff. (Another Democratic letter, to Senator John Barrasso, who chairs the environmental and public works committee, resulted in just what you'd expect: the good senator being OUTRAGED that Democrats had "leaked nonpublic information" by demanding oversight.)

The letter is a veritable smorgasbord of alleged shenanigans at the EPA -- among which a lavish Swedish buffet seems to be the only possible luxury Pruitt forgot to include. In addition to stuff we already knew about, like the Cone of Silence, the lights-and-sirens motorcades to important tony restaurants, and the grifterpalooza world tour, the letter details some additional Pruitt weirdassery:

The New York Times dutifully notes that a spokesman for Hart, the lobbyist/landlord, "challenged the assertions in the letters," and specifically insisted the hardwood floors had not been damaged. The investigation of hardwood floorgate is certain to play out on Fox News, although we haven't checked whether Lumber Liquidators is boycotting Hannity and Laura Ingraham. And speaking of the apartment, the Daily Beast 'splains -- in a story that's mostly about how all this Pruitt news has caused trouble for Hart at his lobbying firm -- that Pruitt was apparently the worst tenant ever. Not merely late with his rent, but also just a nasty-ass slob:

According to three people familiar with events, Pruitt would not take out the trash during his time staying at the townhouse believing that a cleaning service would do it for him. There was no cleaning service that came with the apartment, however. And the garbage bags piled up to the point that Vicki Hart was forced to tell him to put them in the canister and to take that canister out to the street the next time he left the building.

“Tenant from hell,” said one source.

But back to the letter, and Chmielewski's allegations. There's still more travel stuff, like the revelation that not only did Pruitt demand to fly first class, he also had to fly Delta for the sake of racking up frequent flier miles, even though the government already had a contract with a different airline.

Chmielewski also said Pruitt's trips often had more to do with cities or even countries Pruitt wanted to go visit rather than any pressing EPA business; he would tell his staff, “Find me something to do" in those places so he could take a nice trip somewhere. The same went for long-weekend visits to Pruitt's home in Oklahoma or elsewhere, which would explain why the EPA saw a sudden uptick in vital administration business that had to be done on weekends in Oklahoma, or in cities where the Sooners were playing away f'ball games.

On foreign trips, instead of staying at hotels recommended by the US Embassy for their security and access to other government things (like, say, secure communications), Pruitt often chose "more expensive hotels with fewer standard security resources," which meant Pruitt's personal Jem'Hadar Strike Force Alpha security detail simply had to come along to keep him safe.

Oh, and speaking of that security detail -- in a whole 'nother story yesterday (based in part on Chmielewski's revelations), the Times advises us the head of Pruitt's security detail, a former Secret Service agent named Pasquale "Nino" Perrotta, is smack dab in the middle of a lot to the antics at Pruitt's EPA, frequently flying first class with Pruitt and serving as the enforcer who told troublemakers like Chmielewski to quiet down -- and firing them, as needed. Perrotta was also on the lookout for chances to turn his insider status to his own financial advantage, just like the Grifter in Chief they both serve:

When Mr. Pruitt and his team became convinced that his office might have been bugged by environmentalists or disgruntled career employees, Mr. Perrotta recommended that a sweep for surveillance devices be conducted by a company owned by Edwin Steinmetz, who is listed as a vice president at a security firm Mr. Perrotta operates on the side, the senior officials said. Mr. Perrotta also used agency funds to hire Italy-based private security guards to protect Mr. Pruitt during a trip to Italy, they said.

Corruption? That's such an old-fashioned word -- and when the "president" himself is making bank renting golf carts to the Secret service, can you really be surprised? Wouldn't you know it, Perrotta is also among the EPA staffers who insist -- with little evidence -- that Scott Pruitt is facing unprecedented numbers of death threats, so he needs a huge security team. Headed by Perrotta. And my, what a colorful character!

Mr. Perrotta has cheekily referred to himself as the agency’s sheriff and has whistled the distinctive tune made famous by the Western film “The Good, the Bad and the Ugly,” said two E.P.A. officials who worked with Mr. Perrotta. On occasion, he has worn a black cowboy hat and boots around the E.P.A. office, a move that some colleagues considered a lighthearted allusion to Mr. Pruitt’s home state, Oklahoma.

The security dude he replaced, Eric Weese, was a stickler for the rules and wouldn't even let Pruitt play King Shit Of Everyone when Pruitt wanted the lights-and-sirens jaunts. Perrotta was way into all that stuff, and went even further, sealing off access to the floor of EPA headquarters on which Pruitt's office is located. Only those on a Very Special List could even go to that floor, and anyone not on the list presumably was shot. Or at least not allowed to see Pruitt.

Perrotta also got into a physical altercation with Mario Caraballo, the former deputy associate administrator of EPA's homeland security office -- the guy who was shitcanned for approving the report saying that a postcard saying "CLIMATE CHANGE IS REAL!! We are watching you!" wasn't a death threat:

Things got so heated that a scuffle broke out during a meeting last summer of the agency’s top security and administrative staff, according to attendees. They said that Mr. Perrotta traded expletives with Mario Caraballo [...] and that the two men had to be physically separated.

Perrotta was also behind the firing of a security detail member, John C. Martin, after an audit of EPA employees' government-issued cell phones found Martin had an app for secure communications on his phone. While the app could have been used for legitimate work, its very presence made paranoids like Perrotta suspicious that Martin might have used it to talk to reporters -- and worse, Martin had questioned the need for some of Pruitt's extreme security measures, so he was obviously disloyal, a leaker, and probably a deep state radical environmentalist mole. Perrotta ordered Chmielewski to fire Martin, then seize his gun and badge, then probably cut all the buttons off his uniform while humming the theme from "Branded."

Also, Pruitt has four different goddamn email addresses, but we are fucking tired of his shit for now, so we say the hell with it, just fire the fucker already.

Yr Wonkette is supported by reader donations. Please click here to help us buy better heavy weather gear, because the News Storms just keep getting worse almost as if they were caused by climate change.