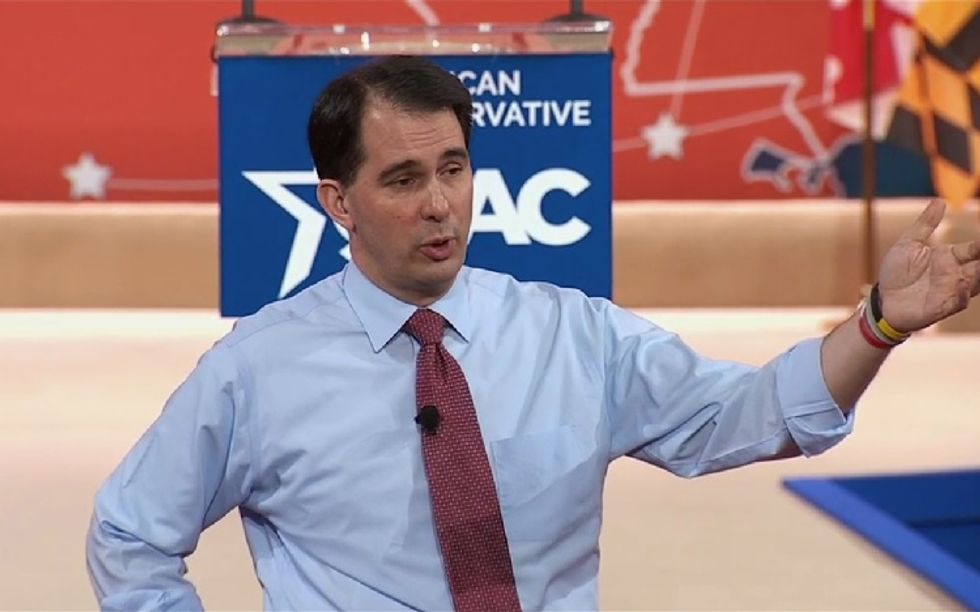 In his speech to CPAC Thursday night, Scott Walker let America know that he's ready to handle international relations without wasting any time on diplomacy, explaining how his experience in crushing public-employee unions makes him the perfect choice to take on international terrorism:

“If I can take on 100,000 protesters,” Walker said, referencing his fight against public-employee unions in his state, “I can do the same across the world.”

He's been battle-tested, at least in a Bill O'Reilly kind of way.

For some crazy reason, a whole lot of people think that maybe suggesting public employee unions are like terrorists -- or for that matter, suggesting that beating ISIS would be easier than beating teacher unions -- isn't such a terrific simile. For one thing, we definitely don't recall any beheadings outside the Wisconsin capitol building, though maybe that happened in the version of Wisconsin that has palm trees. And the teachers' unions definitely aren't armed with rocket-propelled grenades, no matter how useful those would be in some middle-school classrooms.

WaPo's Chris Cilizza goes out of his way to explain what may have been going on in Walker's head:

Americans protesting in a state capitol over labor issues, while serious, is just not on the same level as the threat posed by a militant group that uses beheadings, burnings and other savagery to spread terror in the world. It might seem the same to Walker because the personal vitriol aimed at him was so massive during the protests and the recall effort that followed.

Honestly, Gov. Walker, you should know better than to compare union members and their supporters to a radical death cult that wants to remake Iraq and Syria into a fantasy version of what they're sure their Founders would have wanted. You should have compared the protesters to Nazis, obviously, which is the American Way.

“You all will misconstrue things the way you see fit, but I think it’s pretty clear,” he said. “That’s the closest thing I have in terms of handling a difficult situation, not that there’s any parallel between the two.”

That should play well: "I admit I haven't really had any foreign policy experience, but I could see protesters from my house."

Still, we can think of some other parallels Walker could use. ISIS is in the news today for yet another kidnapping of civilians in Syria, and for destroying priceless ancient art at a museum in Mosul, Iraq. That's probably something Walker has some thoughts on, too. Given his experience with defunding Wisconsin's excellent public university system, he knows all about dismantling treasured cultural resources.