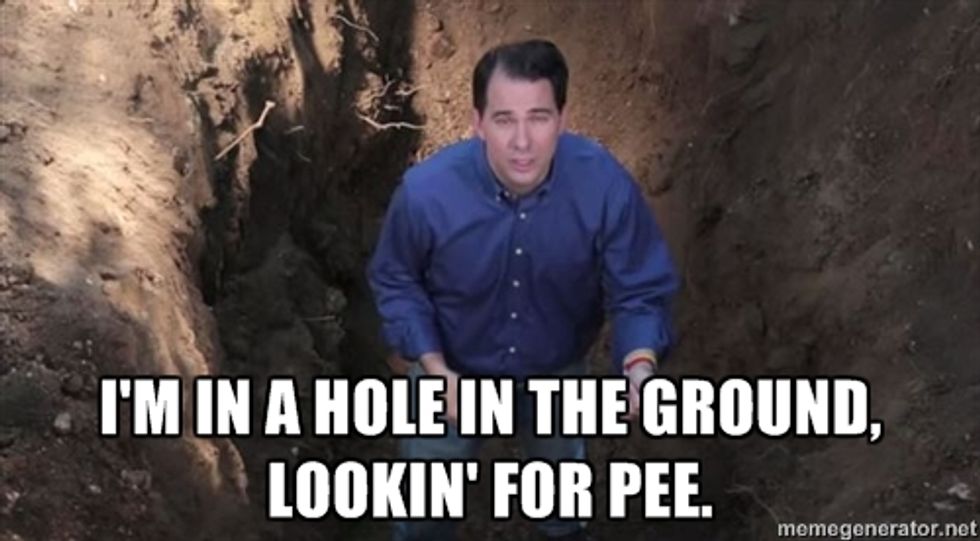 If you are the Republican governor of Wisconsin, you have two fetishes. The first one is hot ham and rolls, which Scott Walker is in love with in a biblical way. The second one is pee, specifically the pee of poor people on food stamps, because you know all those gross poors are addicted to drugs, and if they're not, well, why don't they prove it by giving the governor some pee?

Wisconsin's attorney general on Tuesday filed a lawsuit against the U.S. government, asking a federal judge if the state can drug test some food stamp recipients, a policy supported by Republican Governor Scott Walker, a presidential candidate.

The lawsuit asks a judge to clarify whether federal law allows Wisconsin to drug test food stamp recipients who participate in the state's Foodshare employment program, which is required for able-bodied adults without dependents.

Walker added, "Our reforms offer a hand up to those who need it, so they can get back on their feet through drug treatment and access to employment training," and then maybe he said under his breath, "Give me the fucking pee, I need it right now, I'm almost out of pee."

Is this legal? Under federal law, nope, at least not for the 46 million Americans who receive SNAP benefits. But states ARE allowed to make their own rules for the much smaller pool of people receiving Temporary Assistance for Needy Families (TANF) benefits, so maybe Walker can get some pee, just not as much.

The issue at hand is whether Walker can treat SNAP recipients like TANF recipients, because that would give Walker a much bigger group of poors to fuck, and that's another thing he just really likes doing. He's been trying to secure all the poor people pee for a while now; his Republican legislature has been hard at work trying to make sure poor people only eat and drink approved foodstuffs, and definitely no beans or rice, because we're guessing that makes their pee weird and not to the governor's liking; and of course, the Good People of Wisconsin should make sure to keep an eye on what gross poors are buying in the grocery stores, to make sure they're not frittering away their welfare moneys on unapproved foods.

And is drug testing welfare recipients even effective? NOPE. They find VERY LITTLE when they test all the gross welfare-receiving poors for drugs, so it would seem that it has more to do with shaming them, and very little to do with good, efficient government.

So why is Wisconsin doing this? Because Scott Walker needs pee, so bad. Won't somebody please give him some?