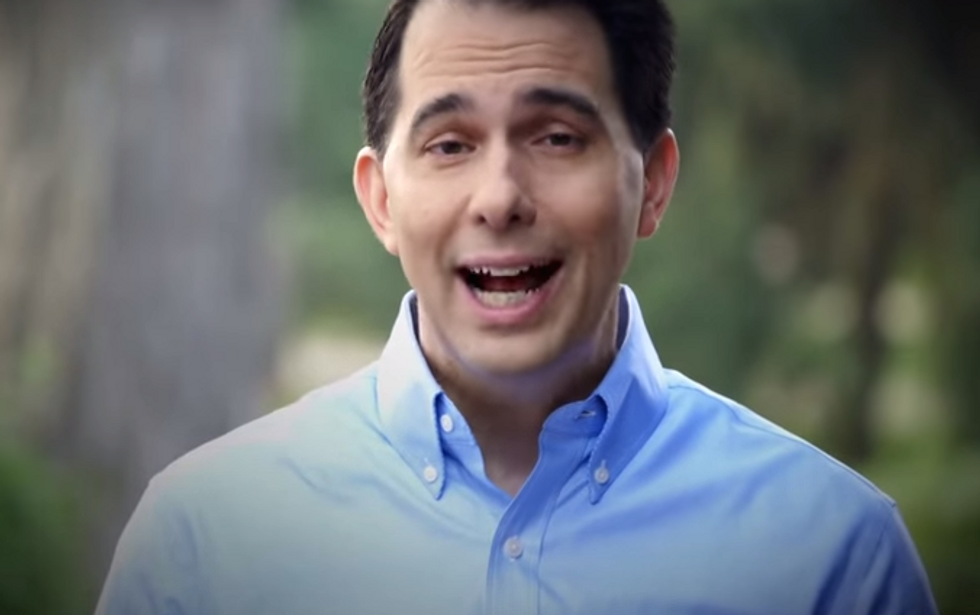 But his bosses didn't like him so they shot him into spaaaaace.

You might recall Scott Walker's courageous decision to stop stepping on his own dick and instead fall on his own sword back in September so the Republican field could narrow itself down and agree on a single candidate to stop Donald Trump. It was very touching and we laughed at the nobility of it all, and then we posted this Vine one more time because it will always be the finest image of the governor of the great state of Wisconsin:

Then the remaining Republican candidates kept running forever and Trump won the nomination anyway, and eventually everyone began to pause a moment at the name "Scott Walker" before dimly remembering who he was. But now all that's going to change, because Scott Walker has announced he's going to speak at the Republican National Convention on behalf of Donald Trump. In an interview on Madison radio station WKOW, Walker said that it's all a matter of principle, because you gotta save America:

"From the delegates I've talked to here in Wisconsin, as well as those across the country, as much as there have been legitimate issues raised and concerns -- the bottom line is most delegates are headed down the path that I am, which is that it's a clear contrast," he said. "It's either gonna be Hillary Clinton or it's gonna be Donald Trump and we have to decide who we want it to be."

Walker hasn't exactly endorsed Trump -- during the campaign, he pledged to support the Republican nominee, whoever it was, then Walker endorsed Ted Cruz, who also lost. In June, Walker suggested that he might endorse Trump, but only if the walking bad hair day would apologize for his bizarre rants against Judge Gonzalo Curiel:

“He’s not yet the nominee. Officially that won’t happen until the middle of July, and so for me that’s kind of the timeframe,” Walker said. “In particular I want to make sure that he renounces what he says, at least in regards to this judge.”

As of early July, Trump hasn't renounced diddly, but Walker is set to speak for Trump. To balance things out, Trump said that only former GOP candidates who endorsed him would be allowed to speak for him at the convention, although as we just mentioned one paragraph up, Walker has not endorsed Trump. So everybody gave a little, a spirit of compromise and amity reigns, and Donald Trump finally found a former Republican opponent who was willing to stand onstage at his beauty pageant/nominating convention in Cleveland. We hear Trump sealed the deal by promising not to ask Walker any tough questions about consistency.

We can hardly wait to hear what Walker thinks makes Trump qualified to be commander in chief, seeing as how Donald Trump has never been an Eagle Scout. Maybe Walker will look at Trump's record of skipping out on all his bills and decide that's close enough to destroying public sector unions to prepare Trump to fight ISIS.

Yr Wonkette is betting Walker's noble gesture on behalf of Trump will be every bit as successful as his earlier noble gesture against Trump was.