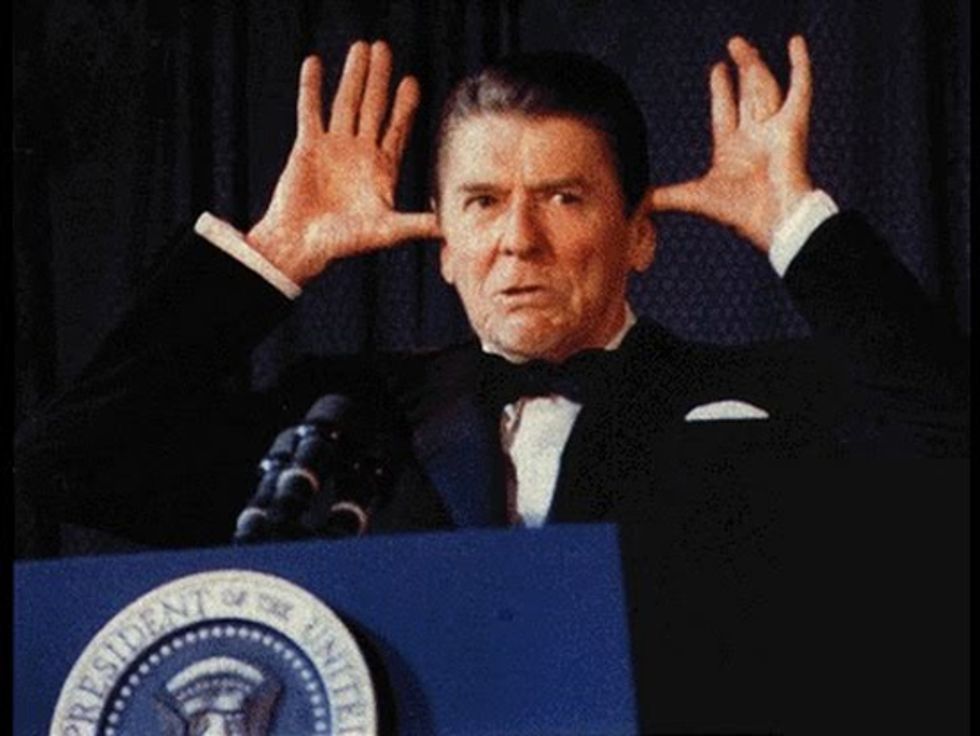 Scott Walker was out proving his foreign policy expertise again this weekend, Wisconsplaining how not knowing diddly about those foreigns isn't really all that important as long as you have the mental toughness to break a union or two. For instance, just look at what Walker said was Ronald Reagan's greatest foreign-policy achievement: firing all the striking air traffic controllers in 1981. This is what sets Scott Walker apart from other Republicans. Where the average Republican would reflexively say tax cuts are the solution to every problem, Scott Walker boldly goes with union busting.

Walker was doing a Q & A with the Club For Growth in Palm Beach, Florida, and got a question about how he was preparing to handle foreign policy, seeing as how so far, his greatest accomplishment in the field has been comparing unions to terrorists (which he of course later said was not at all what he meant when he said that if he could take on public employee unions, he can certainly handle ISIS).

Walker started by saying that he was meeting with all sorts of terrific experts in foreign policy, like George Schultz, and also Henry Kissinger, who presumably told him to secretly bomb Cambodia. Plus he's been boning up on foreign places with the American Enterprise Institute and the Hoover Institution, as well as reading summaries of most of the Tintin books.

Ultimately, though, having a bunch of egghead knowledge about your foreigns is probably not all that important, Walker said, although sadly he didn't make any reference to Ubeki-beki-beki-beki-stan-stan or that one country that had Gadaffi.

What really matters when it comes to your foreigns is making sure they know who the alpha dog is:

“I think foreign policy is something that’s not just about having a PhD or talking to PhD’s," he said. "It’s about leadership."

Walker contended that "the most significant foreign policy decision of my lifetime" was then-President Ronald Reagan's move to bust a 1981 strike of air traffic controllers, firing some 11,000 of them.

Why, yes, Scott Walker most certainly did classify domestic union-busting as an example of foreign policy. Again. And he even explained why!

"It sent a message not only across America, it sent a message around the world," Walker said. America's allies and foes alike became convinced that Reagan was serious enough to take action and that "we weren't to be messed with," he said.

We're convinced! Under a Walker presidency, if France starts pissing us off, we'll just fire France and hire some scabs to replace it. That'll show 'em who's boss.