Scott Walker Revives Campaign With Promise To Bring Back Sweatshops 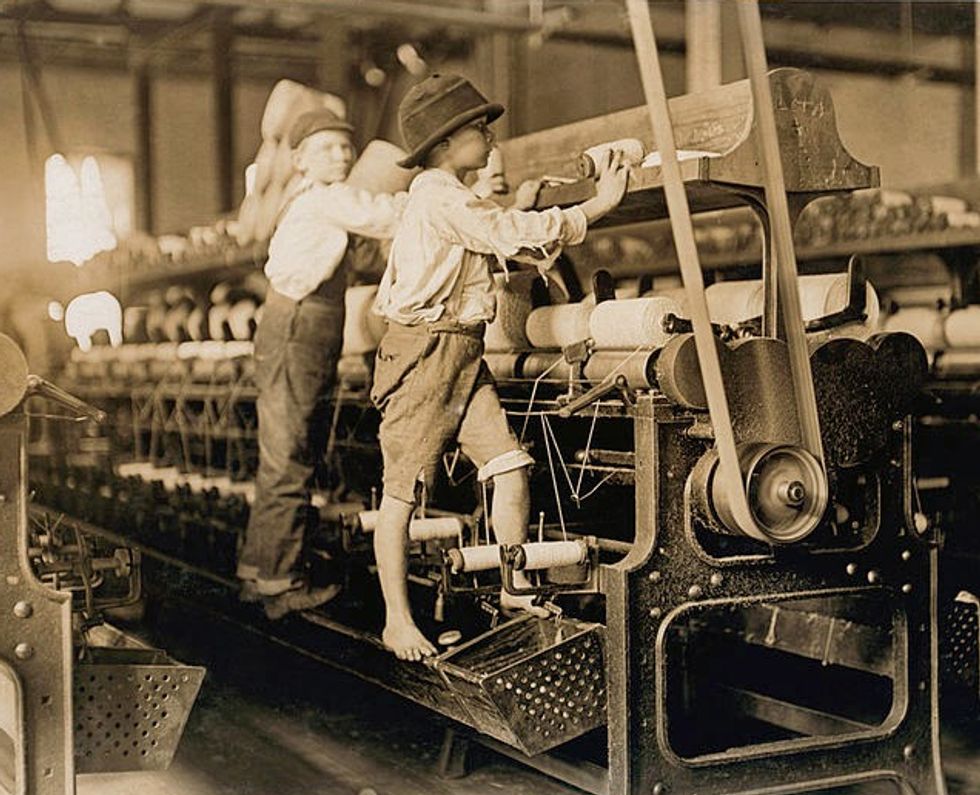 Bringin' back the good old days

Scott Walker -- described, in an edition of the Encyclopedia Galactica that conveniently fell through a rift in the time-space continuum from 1000 years in the future, as "a mindless jerk who was first against the wall when the revolution came" -- has a brilliant idea that's going to capture the imagination of the Republican base and take him to the top of the polls where he belongs: Kill The Unions. No, that's not accurate, sorry for that exaggeration. He only wants to maim the unions. Mortally, if possible.

In a position paper with the Orwellian title "My Plan To Give Power To The People, Not The Union Bosses," Walker lays out his vision of prosperity for all Americans named Charles and David Koch, as well as a few others. He would ban federal workers from collective bargaining, pass a national "right-to-work" law (even better than the one he signed in Wisconsin), and get rid of the National Labor Relations Board altogether. In addition, his plan would require all unions to hold periodic elections to re-certify whether workers want the union to exist at all. This is listed under the hilarious heading "Protect Employee Rights," because Walker believes employees must be protected from "threats, violence, and extortion from a union." Those thugs. And just to make sure no one gets paid too well, he'd eliminate the Davis-Bacon wage law, so that working on a federal construction job would no longer give anyone a bunch of stupid protections they don't need.

He also announced that when he becomes president (HAHAHAHA), he'll cancel Barack Obama's terrible executive order forcing federal contractors to provide sick leave; while he's at it, he'll repeal recently enacted policies requiring that some salaried employees get paid for overtime, because maybe they want something more flexible, like working longer for no extra pay.

Walker stopped short of calling for an end to prohibitions on child labor and the 40-hour work week, because he has to keep something in reserve for future announcements.

Walker announced his plan at a town hall meeting in Las Vegas Monday, appearing on the shop floor of the appropriately named "Xtreme Manufacturing," promising to manufacture some extremism that should Save America by putting more federal employees out of work:

We must take on the big-government union bosses in Washington -- just like I took them on in Wisconsin [...]

Federal employees should work for the taxpayers -- not the other way around.

This will come as a huge surprise to every government employee who's ever had an irate taxpayer screaming "I PAY YOUR SALARY!" in their face.

The Milwaukee Journal-Sentinel notes that Walker "received polite applause, as well as a boo, for his proposals to eliminate the labor relations board and establish a national right-to-work law." The seeming malcontent in the audience later clarified he'd been saying "Boo-urns."

It's not yet known whether Walker's bold proposals, which one union leader said would represent a "scorched earth" attack on workers and the middle class, is going to help anyone notice that he's still running. As the Journal-Sentinel points out, he's not exactly setting anyone else on fire right now:

A survey Friday by Quinnipiac University found that the onetime front-runner in Iowa had dropped to 3% in the state that holds the nation's first presidential caucus. A poll released Monday by The Washington Post and ABC News found Walker had 2% support nationally.

Walker, who became a Republican darling for exactly one thing -- his war on public sector unions -- has so far used that experience as proof that he could take on ISIS and do foreign policy really good, so it only makes sense that, with his campaign losing steam, he'd go back to his anti-labor roots and find bigger, grander schemes to screw workers. We're looking forward to his future policy proposals on other matters: He'll improve medical care by going after unions, fix education by eliminating unions, end hunger by screwing unions, and solve the Syrian refugee crisis by firing union social workers. Oh, wait, we forgot, he can't say anything about the Syrian refugees yet, since they're purely hypothetical.