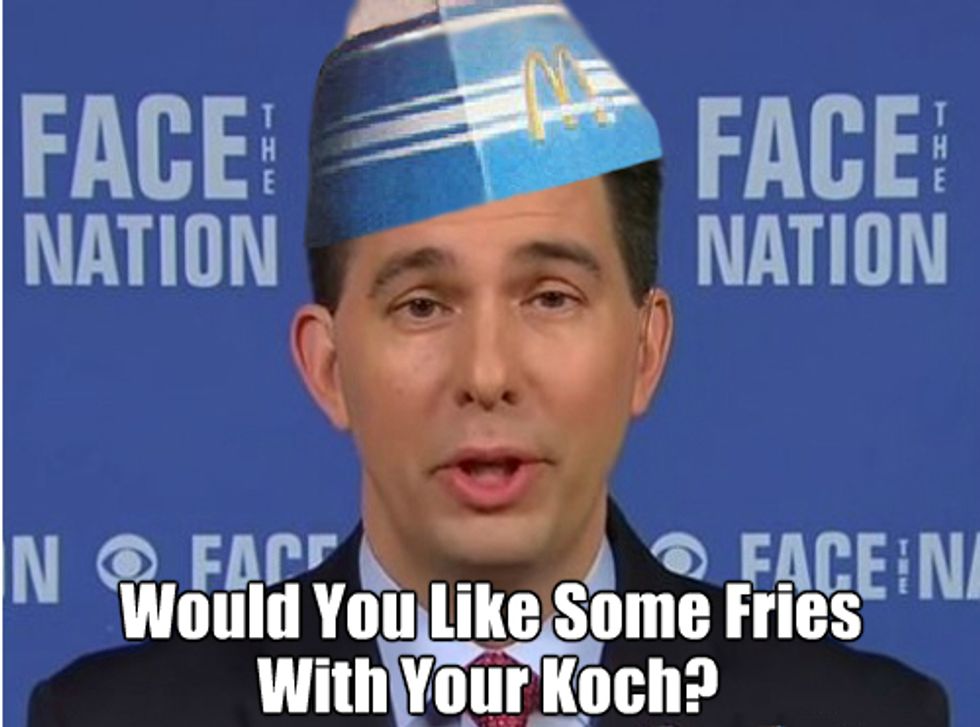 Wisconsin Gov. Scott Walker wants the electorate to know that he'll be the bestest president ever for workers, because unlike the dumb old Democrats, he refuses to give a shit about the minimum wage, which is barely worth even talking about. Why would anyone want a minimum wage job when they could be rich instead? This is only logical. Speaking with Sean Hannity on Fox shortly after his Great Big Announcement Monday, Walker explained that by gutting unions, he has given workers more choices, and is therefore the real friend of working Americans (just as long as they know their place).

You see, the left is only talking about pointless stuff like raising the minimum wage. But is just making the minimal possible amount really anything that an American should aspire to? Talk about stupid ideas!

“The left claims they’re for American workers, and they’ve got lame ideas, things like minimum wage,” Walker said. “We need to talk about how we get people skills and qualifications they need to get jobs that go beyond minimum wage.”

Yeah, because if everyone just had more opportunity, then wages would all go up, maybe, and there would be no need to raise the minimum wage, or to talk about raising it, because it's a lot more fun to think about how everyone could become rich. If we "expand opportunity" -- probably through tax cuts on the rich -- then the tens of millions of people who remain in minimum wage jobs will really be proven unworthy, because just look at them, still making only minimum wages even with all these expanded opportunities! Besides, it's not like Hillary Clinton's call for increasing the minimum wage means she cares about working people either, because something something union thugs:

“The reason they’re upset, the reason Hillary Clinton said what she said was we took power out of the big hands [of] union bosses and put it into the hands of the hard-working people,” the Wisconsin Republican added.

And now the hard-working people have all this power, and they are delighted with the fantastic economic growth in Wisconsin, which is currently 36th in the nation in private-sector job growth. (It was 11th when Walker took office. Success!) This is actually terrific news for Walker, since anyone who does get a job in Wisconsin feels really lucky, while in states where there are lots of jobs, people don't appreciate having them.

And just think, Scott Walker wants to bring that kind of success to the rest of America! If he pulls that off, there'll be tons of people who won't have to worry about having a minimum-wage job anymore.