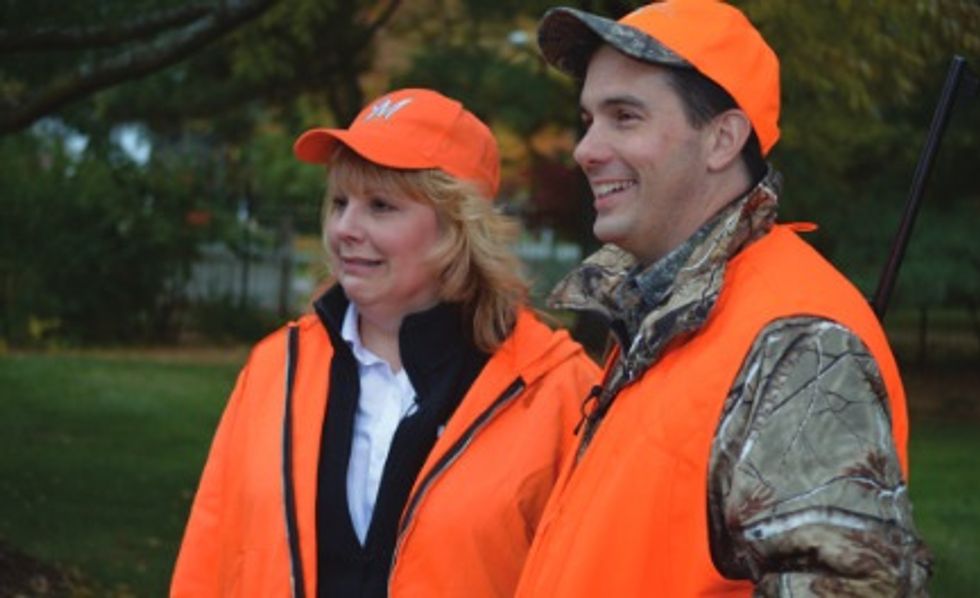 Scott Walker, locked in a tight race for his second term as governor of Wisconsin, wants his constituents to know he's committed to their conservative Midwestern values. It's all right there in his campaign's new manifesto, "Continuing Wisconsin's Comeback": If you give him four more years, he promises to cut property taxes, celebrate deer hunting heritage, supervise manly red-hot iron pours, and relentlessly pursue the urine of the state's unemployed.

Plenty of Republican governors have a thing about making poor people pee in cups for money. This is strictly about fiscal responsibility, of course! Republicans know that once the drug-addled leeches are weeded out of the welfare pool, their states will save tons of money on those wasteful entitlement programs. Pay no attention to what happened in Florida, where the effort was found to be not only illegal but ineffective when too few people came up positive and the tests cost the state more than they saved by kicking the junkies out. No one does drugs in Florida, right?

Even if mean old Uncle Sam stops Scott from indulging his urge to collect urine from people desperate enough for food to endure the humiliation, he could follow the example of fellow tea party governor Paul LePage up in Maine and deploy a Rapid Response Team of welfare fraud sleuths. Paul's Taker-Raiders spent $700K chasing down leads all over the state, digging up an impressive 45 potential welfare cheats. Once Maine gets back every dollar paid to these fraudsters, they'll have recouped a third of the cost of finding them, truly a model of fiscally sound policy.

Scott Walker's declaration of war on the federal government over Wisconsin's sovereign right to purchase plastic cups in bulk is the latest example of the bold leadership he's been showing as governor whenever he gets a break from pre-presidenting around DC and huddling with his lawyers over the best way to use his Koch connections to get out from under the John Doe investigation into his 2010 campaign. He hasn't produced the 250,000 jobs he said would be no problem once he killed public sector unions and his program of tax cuts has left a gaping hole in his state's budget, but as a good tea partier he knows that means he's just not busting unions and cutting taxes hard enough.

Now's our chance, Wonketteers! Let's all get behind Mary (WITH OUR MONEY) and send Scott Walker packing this fall. Please throw wads of cash at the special Wonk For Burke page at ActBlue and help us buy our way into the upper crust of dairyland politics. Madison will make an excellent home base for Shy's Brigade while we ready our incursion into Iowa for 2016.