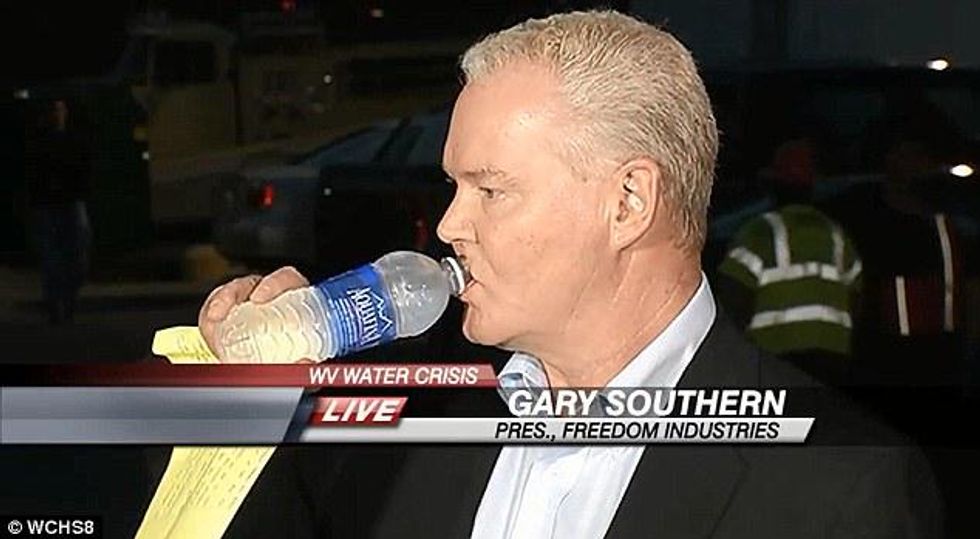 Remember that li'l ol' chemical storage plant that leaked a metric shit ton of toxic coal-washing chemicals into West Virginia's Elk River back in January? And how the CEO of the company responsible for the spill went on teevee and swigged nice clean bottled water while refusing to answer reporters' questions, because he had had a long difficult day and was very tired, so sorry, please leave him alone, OK?

It didn't help that every freaking part of the story sounded like something from a bad Hollywood movie: an evil polluting company named "Freedom Industries," headed by a cartoonish businessbadman named "Gary Southern"? And then, of course, the company immediately declared bankruptcy to avoid paying damages and refused to identify exactly what they spilled because "trade secret." And just to rub our noses in the toxic puddle, it even looked like the company would get away with only minimal fines.

And so, here is your Festivus Miracle of Justice: Gary Southern has been arrested and faces multiple federal charges of fraud:

Southern had claimed that he wasn't responsible for the spill because, in a lucky coincidence, he hadn't really been running the company at the time:

In bankruptcy court hearings and meetings, former Freedom Industries President Gary Southern repeatedly said he had little to do with the company before it was sold a few weeks prior to the January chemical spill. But an FBI affidavit said Southern had overseen day-to-day operations at the chemical storage company, hired employees and executed contracts for several years, according to a complaint unsealed Monday.

"They are either outright lies, or are, at the very least, misleading," FBI Special Agent James F. Lafferty II said in a sworn statement. "All of the statements indicate or suggest an effort to deflect blame from Southern for the discharge of (the chemical) MCHM into the Elk River."

And just how badly-off is poor Gary Southern as a result of his victimization by regulators and the Freedom Industries bankruptcy? West Virginia's MetroNews reports that the poor dear has personal wealth of a mere $7 million, which is just right above the poverty line for rich assholes these days.

Also, the federal prosecutor in the case, U.S. Attorney Booth Goodwin (yes, even the good guys in this story sound like they were named by a lazy screenwriter), is hinting at more to come:

“We’ve had a fairly broad investigation and we’ve stayed after it and certainly you can expect further developments in that investigation very soon," Goodwin promised.

Oh, let's hope so. We suppose it would be wrong to wish he'd be sentenced to drink West Virginia tap water from January, so we'll settle for the roughly 30 years he faces if convicted on all charges.

Rachel Maddow had a nice wrap-up of the story last night: