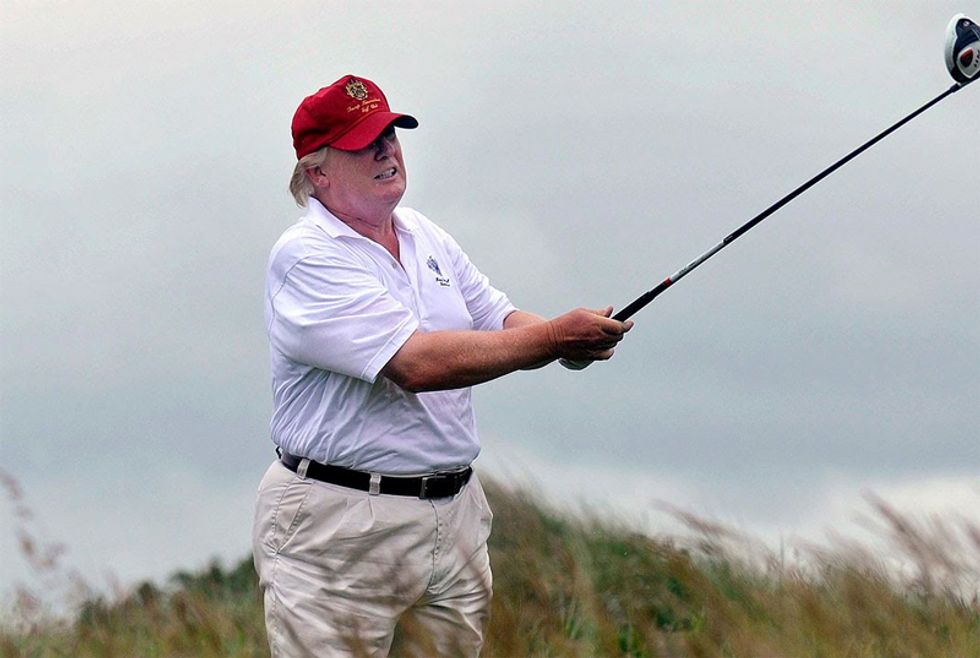 'To find a man’s true character, play golf with him.' -- P.G. Wodehouse

OK, you filthy liberals giggling over how Donald Trump has been golfing like crazy since taking office, let's get this straight: Donald Trump's golfing is a lot different from Barack Obama's golfing, because Donald Trump is a much better president than the fake Kenyan socialist he replaced, and when Barack Obama played golf he was wasting time, while when Donald Trump plays golf, it's always with the Japanese prime minister that one time. Totally different thing.

Trump seems to have forgotten all the nasty things he said about Barack Obama wasting his time golfing instead of presidenting. You know, like the tweets:

And also too the campaign speeches!

“I’m going to be working for you. I’m not going to have time to go play golf,” he said in Virginia last August. Obama has “played more golf than most people on the PGA Tour,” he said on the day before the election in New Hampshire. “What is it, over 300 rounds? Hey, look, it’s good. Golf is fine. But always play with leaders of countries and people that can help us! Don’t play with your friends all the time.”

[wonkbar]<a href="http://www.wonkette.com/614449/even-president-trumps-schedule-is-a-filthy-lie"></a>[/wonkbar]You are no doubt astonished, then, that Donald Trump has spent an astonishing amount of time during the first couple months of his presidency golfing -- at least ten golfing outings so far, which is on a pace to surpass the amount of time Barack Obama spent golfing. The White House is even trying to hide his golfing already -- on February 19, Trump's press team said he'd gone out to hit a couple balls, but then "publicists for golfer Rory McIlroy announced that the Irish golfer had joined Trump for 18 holes," notes the Washington Post. (The official word last Saturday was also that Trump "may have stepped out to hit a few balls," so let's assume that was a full 18 holes, too.)

So it should have been no surprise when Yahoo reporter Hunter Walker had to go and bring it up at Monday's White House presser, asking, "In his first eight weeks in office, President Trump has made at least 10 trips to the golf course. He regularly used to criticize President Obama for spending time on the course. How is his golf game any different?"

Well, I think two things. One is I think you saw him utilize this as an opportunity with Prime Minister Abe to help foster deeper relationships in Southeast Asia — in Asia, rather, and have a growing relationship that’s going to help U.S. interests. How you use the game of golf is something that he’s talked about.

Secondly, he had a mini-Cabinet meeting two weekends ago down at his club in Virginia, and I remember so many people jumping to the conclusion that he’s going down and playing golf. Just because you go somewhere doesn’t necessarily mean you did it. So on a couple of occasions, he’s actually conducted meetings there, he’s actually had phone calls. So just because he heads there, it doesn’t mean that that’s what’s happening.

You know, it almost looks like Spicer is putting a lot of weight on that one meeting Trump had with Abe, out of ten golf outings so far.

In a follow-up, Walker asked why, if Trump is doing all this golfing with the Japanese prime minister every time he golfs, we don't get more information on these terrific meetings he's having, much less an explanation of why Shinzo Abe is flying to Florida almost every weekend. Spicer explained it's really none of our business:

So there you have it: Donald Trump does important business with Japan's prime minister once (and he'll probably golf with Chinese President Xi Jinping in April), so golf is, for Trump, one of his many ways of working, the man works all the time, so much he doesn't have time to read books, even. But Barack Obama? He was only loafing around on the golf course with his worthless marijuana friends while America burned to the ground. Oh, and once with John Boehner, who may have been worse than the marijuana friends.

Never Again! Golf for America, not your own brutish lazy leisure purposes.

Yr Wonkette is ad-free, and we depend on your generous donations to keep us in the green, but not on it. Please click the "Donate" bar below, and don't forget to wash your balls.