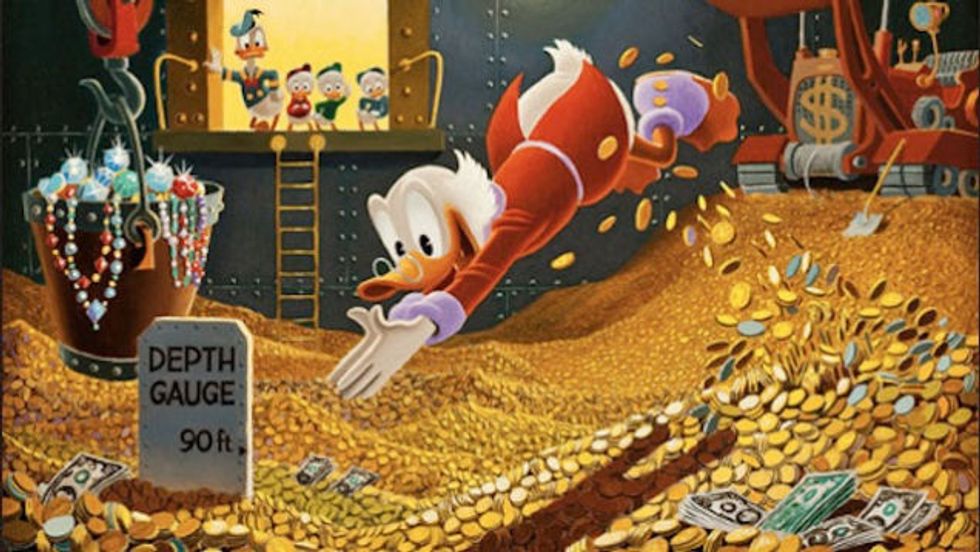 As we all know, there is only one person in the entire country who opposes Donald Trump, and that person's name is George Soros. The rest of us all love Donald Trump and think he is the greatest and handsomest president ever, but are willing to put that aside in exchange for the cold hard cash Soros is doling out willy-nilly to anyone willing to oppose him. It's been quite a boon! I, for one, am about to go out and purchase a bitchin' gold-plated Camaro with my sweet, sweet Soros earnings.

Of course, it may not be long before the jig is up here, as White House Press Secretary Sean Spicer is ONTO US and the fact that we are all just paid shills.

In a brief interview with Fox and Friends' Brian Kilmeade, Spicer explains that the resistance against Trump is not at all "organic" like the Tea Party was, and is in fact an Astroturf movement where we are all being paid to protest, professionally.

Ah yes! The Tea Party! A totally organic protest movement that in no way was mobilized by the Koch Brothers' Americans For Prosperity group! Who ever heard of them? Certainly not us!

It's hardly surprising that Spicer is very suspicious about this whole anti-Trump movement. After all -- when, in all of American history, has the political left ever organized to protest anything!?! Certainly no time that I can think of in the last hundred or so years! That's just not a tactic we are accustomed to using. In fact, protesting things is very new to us as Americans in general, given that it was not even invented until 2008, with the first appearance of the Tea Party.

Curiously enough -- although the idea of George Soros paying us all piles of cash to protest Donald Trump (even though we all love him very much) is very big among people like Spicer, none of them are ever able to prove exactly how this happens or how we are all recruited. Is it on the dark web? Is it through secret backwards messages in Beyoncé songs? I mean, there was that one website that claimed to hire professional protesters, but it turned out to be a hoax. A hoax that, curiously enough, was exposed as such by conservative commentator Tucker Carlson.

So weird! Perhaps the Trump administration should launch an investigation into that, huh? Why are they not on top of this? Over one-third of all Trump supporters believe that protesters at the Women's March were paid to be there -- and if it turns out that everyone who opposes Trump's policies is only doing so because they are getting paid to, then wouldn't proving once and for all that we all don't even exist be advantageous to the Trump administration? Also, if we all don't exist, then who was it that drove Republicans so crazy with all that "political correctness" that they had no choice other than to vote for a total lunatic in order to punish us? If we don't exist then how are we controlling academia and the media?

It's all very confusing! I mean, I feel like I exist, but who is to say? We could all very well be figments of our own imaginations.

The thing I really question here, however, is that if George Soros is doling out millions to people who are willing to walk around for a sign for half a day, then why isn't he being hailed as the greatest job creator in all of America? Or whoever it is that is supposedly paying us to protest? Also where is my check? Where are all of our checks?