Seattle Nice Time: Catholic Students Protest Firing Of Vice Principal For Same-Sex Marriage While They Still Believe In Something 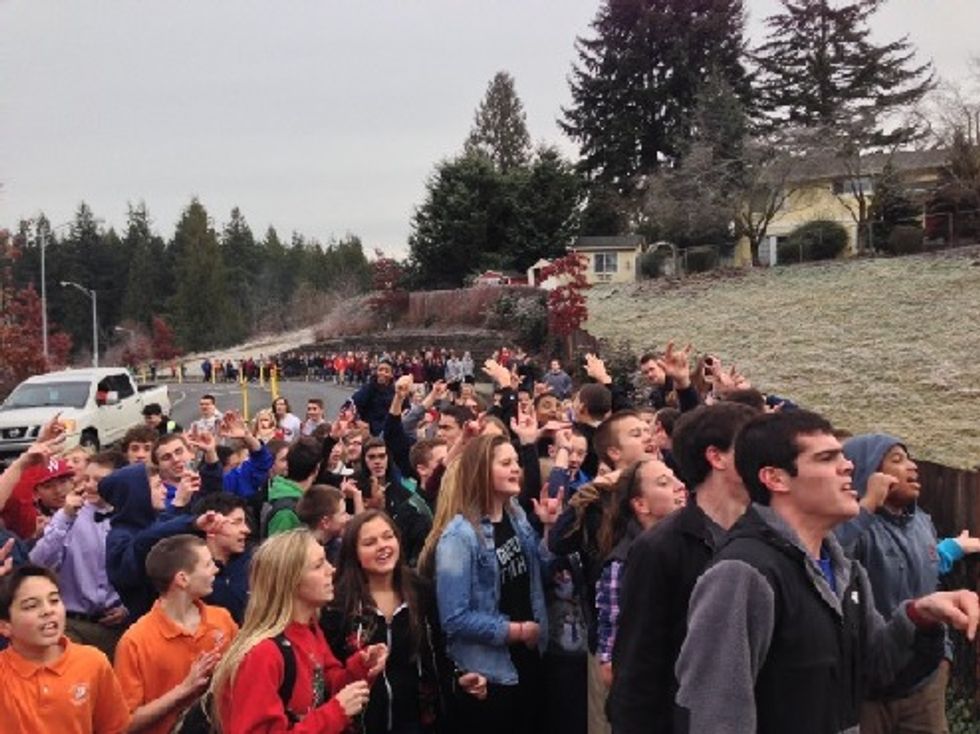 Well this is nice, indeed. We weren't surprised at all when we heard that yet another Catholic school had pressured a faculty member to resign after finding out he'd gotten married to his same-sex partner. But in the Seattle suburb of Sammamish, when students at Eastside Catholic High School learned that Vice Principal Mark Zmuda had been given the choice this week of resigning or being fired for marrying Dana Jergens earlier this year, virtually the entire student body and several faculty members walked out of the school andtook to the street Thursday in front of the school to protest the decision. Students at other Seattle-area Catholic schools staged protests as well.

Told that the decision was made by the Archdiocese of Seattle, not the school, the kids said that they would move the protests there, and would petition the Archbishop to let Zmuda return. Sure, that's not going to happen, but the kids are getting a fine lesson in speaking out against injustice -- and where injustice can come from  -- not to mention getting a practical lesson in how the hierarchy works (another lesson for the kids: U.S. America is a democracy* and the Church is not). This really is an important milestone on their journey toward becoming cafeteria Catholics.

And of course, the school and Zmuda had little choice in the matter, seeing as how that whole hierarchy thing really does operate:

Mike Patterson, spokesman for Eastside Catholic, said that by entering into a same-sex marriage, Zmuda violated teachings of the church, which he had agreed to follow.

Teachers at Catholic schools, Patterson said, sign contracts that they will abide by the doctrine of the Catholic Church, which opposes and forbids same-sex marriage.

“We just learned about it,” Patterson said of Zmuda’s marriage. “He understood he could no longer be employed there because of his current circumstances.”

Still, some of the students appear to have been applying their thinking parts to the contradictions between New Pope's support for social justice and the Church's "well, not for everyone, don't be ridiculous" stance:

“Just because I’m Catholic doesn’t mean I need to believe every rule the Church has,” freshman Sophia Cerino said. “We think the rule over gay marriage is totally unfair. Everyone seems to think the same thing – that we should all be treated equal.”

You know, Sophia, it's people like you what cause unrest. Good on ya.

Ms. Cerino also said that while the kids were out in front of the school, Zmuda stopped by to talk with them:

“He told us he had gotten fired because he is gay and married. He told us to grow up, get a job and find true love. He was crying and told us what we were doing meant a lot to him.”

Sounds like the school and the students are losing one hell of an educator, thanks to good old dogma. And that's an important lesson for the kids in Archdiocese of Seattle schools, too.