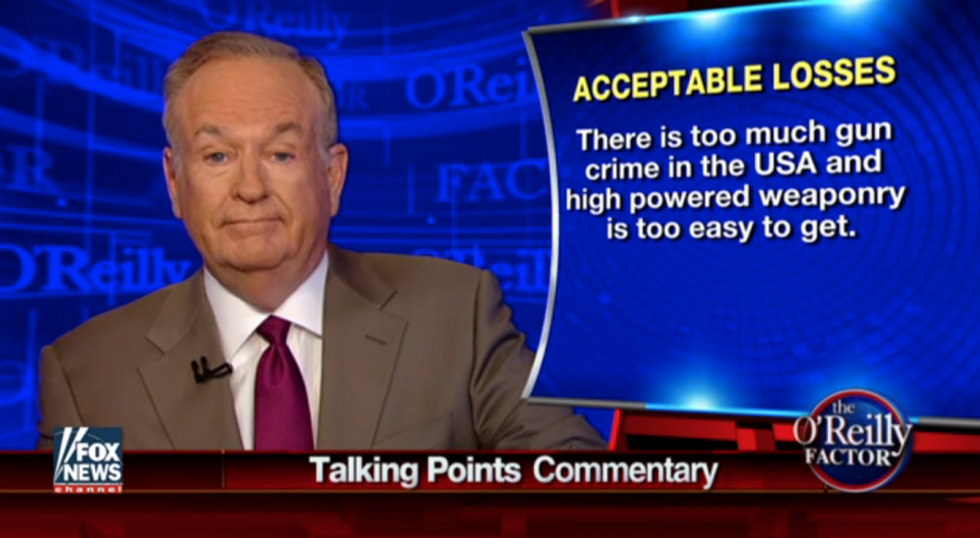 In response to the recent mass shooting in Orlando, even some of the most diehard Fox News conservatives and Republican politicians are starting to warm up a little to the idea that some amount of gun control may be necessary. That perhaps those we have placed on the no-fly list ought not to have access to guns, that perhaps people shouldn't have the kind of guns that make it so darn easy to kill so many people at once. For most people, there's a tipping point where you realize that this is not a thing that is working out so well, and that people's lives are maybe just a little more important than the feelings of some assholes who just want to have these kinds of guns.

This week, Gretchen Carlson surprised us by getting to that point. Perhaps even more surprising, so did Bill O'Reilly.

When it comes to Second Amendment nutjobs, there are two varieties. The first is the one we are more familiar with. The kind that is pretty darn sure they need an assault weapon for the purposes of hunting and protecting their home from intruders. Then there is the other type! The type that believes that the actual purpose of the Second Amendment is so that they can overthrow the government should it get all "tyrannical." And anyone that doesn't want them to have all of the guns is someone who loves tyranny.

This variety is particularly fond of making up quotes from the founders that appear to support this theory.

The actual quote for this one? Welp, can't really use it because it states the exact opposite of what the point these people are trying to make!

To suppose arms in the hands of citizens, to be used at individual discretion, except in private self-defense, or by partial orders of towns, countries or districts of a state, is to demolish every constitution, and lay the laws prostrate, so that liberty can be enjoyed by no man; it is a dissolution of the government. The fundamental law of the militia is, that it be created, directed and commanded by the laws, and ever for the support of the laws. -- John Adams, A Defence of the Constitutions of the United States

Whoops! So weird how basically everything the founders ever said about people having guns was related to state-run, well-regulated militias, and not a bunch of lunatics who think they have the right to overthrow the government and have literally any kind of weapon they want.

It is, of course, those types of gun nuts who populate a little stop on the information superhighway known as Breitbart.com. A site filled with commenters so deranged that they believe, deep in their little coal hearts, that Bill O'Reilly is a LIBERAL. Yes. Bill O'Reilly. Way too far to the left for these people. Such a commie, really, that they can barely tell the difference between him and yr Wonkette!

In fact, they have all apparently come to the conclusion that Fox News itself is far, far too liberal. Which should come as quite a surprise to the rest of us!

And both Fox News and Bill O'Reilly? SECRETLY JEWISH!

And definitely liberal, since pretty much forever, because he refused to pretend that Obama's birth certificate wasn't real!

Breitbart logic is not a very easy thing to figure out, at all. Neither is their interpretation of history or the constitution. From what I can tell, it goes like this:

The founding fathers put the Second Amendment into the Constitution specifically so that "we the people" would be able to rise up and overthrow the government in case of tyranny. That is what they meant by "A well regulated militia being necessary to the security of a free State, the right of the People to keep and bear arms shall not be infringed." Then, James Madison wrote up a thing in The Federalist Papers about how individual states should have their own militias, in order to keep the power of the federal government in check. This is interpreted, again, as "ASSAULT RIFLES, TANKS AND POSSIBLY NUCLEAR ARMS FOR EVERYONE!"

Also, naturally, they are still very fond of misquoting the founding fathers!

Yeah! Not a real quote, crazily enough! Of course, it is pretty easy to just make up quotes like that. We can do it too!

It's pretty weird how the Founding Fathers wanted lunatics to take over the government SO BAD, but for some reason made it illegal to go around assassinating people! Or committing treason! You would think that if they really wanted these people to have all the guns for the purpose of overthrowing the government, that they would have made those things legal and put it in there someplace. And that they wouldn't have kept mentioning well-regulated, state-run militias all the time! And no one would have to imagineer all these pretend quotes, because they would have actually said them!

Also? The Civil War never would have happened! OH, by the way, I do feel as though I have figured out Breitbart logic on the Civil War! Apparently the South was right and Confederate flags are great, but ALSO black people need to be voting Republican because Abraham Lincoln saved them, and they could be a little more grateful about that. But also they should stop mentioning slavery because it was a long time ago, and not complain about racism now because it is not as bad as slavery. Something like that! Also they've been brainwashed by the Left into thinking conservatives are racist and social programs to help the poor are a good thing. It's all very confusing but I believe I will have the hang of it someday!

Perhaps the most pathetic belief held by these geniuses is that they actually represent a majority of Americans, all of whom would vastly prefer Donald Trump and the Breitbart commentariat to be in charge of everything, rather than their elected officials. They are "we the people," and everyone else is either being tricked into voting Democrat, or is evil, or a paid shill, or not really American.

If anything, these sorts of people explaining that they want assault weapons in order to assert their right to overthrow the government should be reason enough to ban assault weapons. I don't want them in charge! Do you want them in charge? No, you do not. NO ONE WANTS THAT. No one wants to live in that world. If they want to live in that world, they should just go live in it by themselves and leave the rest of us alone.