Secret Muslim Barack Obama's New House Is Near A Mosque, And The Daily Caller Is ON IT 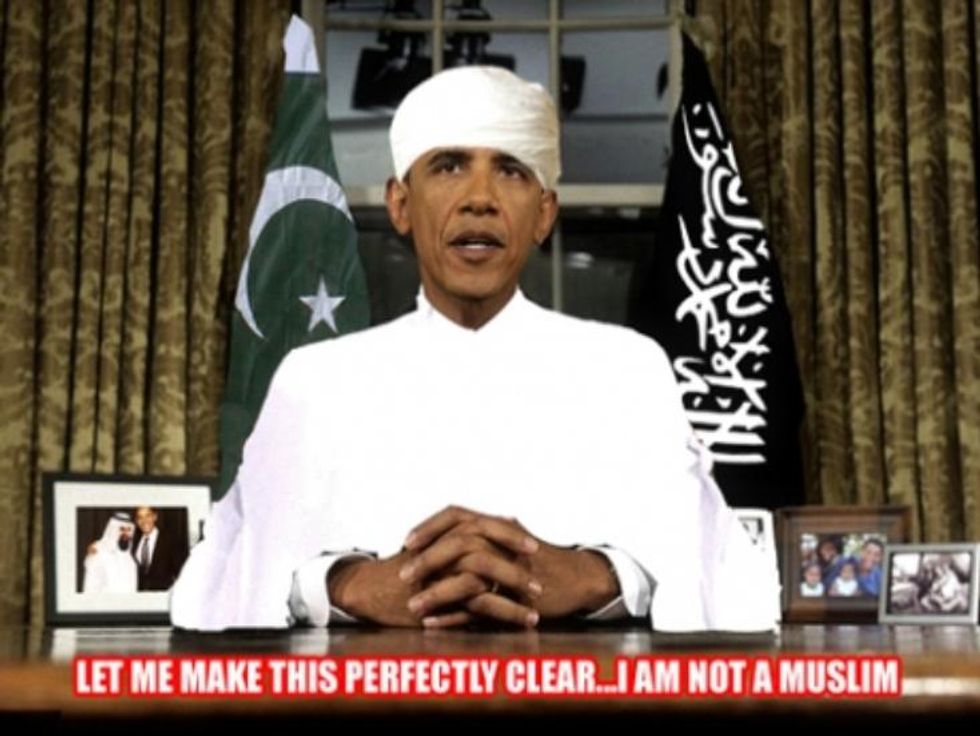 That's what Obama will wear at his new Muslim house.

We all learned this week that if and when Barack Obummer relinquishes his presidential throne (unlikely!), he and his family will move to the Richie Rich Washington D.C. neighborhood called Kalorama, so that Sasha can finish high school with all her BFFs. And on Tuesday, Washingtonian was like UGH, Obama, we thought you were all hopey and changey and shit. How dare you be a wealthy ex-president, living in a wealthy neighborhood with other wealthies? Shouldn't you probably live somewhere a little more hipster-humble? UGH.

Well, The Daily Caller, Tucker Carlson's home for racism and cleavage, has now picked up the story, seizing on a whole different angle. Yeah, there might be a bunch of rich fucks in Kalorama, but did you know that, really close to the Obamas' new house, there are Muslims who do Muslim things at a Muslim mosque, like common Muslims? WHOA IF TRUE:

The mammoth, multi-million-dollar mansion where President Barack Obama and his family will reportedly live after the first family exits the White House is located 1,096 feet from the Islamic Center of Washington — one of the largest mosques in the Western Hemisphere. [...]

The Islamic Center is a tremendous resource for the District’s Muslim community. “It provides Qur’an and Islamic Literature and distribution of such publications that would create awareness and knowledge of Islamic Truth,” according to the center’s website.

That's nice! What else?

In addition to the Islamic Center of Washington, the embassy of Oman and the former embassy of Iran are very close to Obama’s new mansion.

Isn't the Daily Caller adorable? It publishes basically straight news stories that aren't even openly xenophobic or racist, not even remotely insinuating that MAYBE Kenyan Muslim Marxist Gay Obama wants to live 1,096 feet from the mosque so he can hop, skip and jump to prayers WITH HIS PEOPLE five times a day, which was never very convenient from the confines of 1600 Pennsylvania Avenue. They're just saying the facts!

The Daily Caller then leaves the dirty work to its commenters, who connect all the dots. The site does this with entertainment stories all the time, with headlines like "Britney Spears Dancing On A Stripper Pole Is The Greatest Video Ever." This gives their chairborne readers a Safe Space where they can either call Britney a whore or say she has no talent, or even better, that they've never even HEARD of that slut.

Let's spend five whole seconds looking at the comments for the piece on Obama's new mansion among the Islamics, and see if we can ...

For real, y'all, that took us five seconds.

Oh, did we mention the Daily Caller's other hilarious story this week, a slideshow of a bunch of ladies in bikinis with a picture of Hillary Clinton in a swimsuit mixed in, so commenters could call her a fat email Benghazi whore? That was nice.