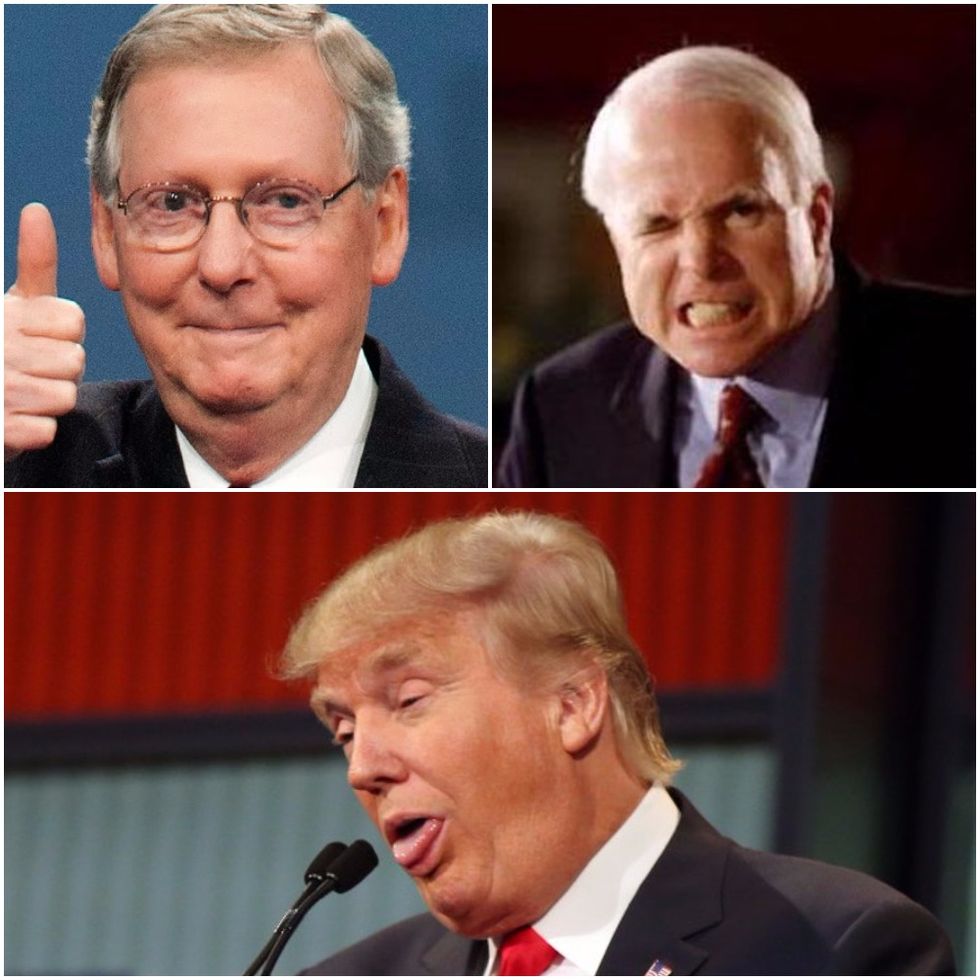 Oh, guess McConnell doesn't like it when Trump bounces like bunny rabbit onto his early morning Twitter machine and upchucks bullshit into the atmosphere about #rigged elections. But maybe that was just an isolated incident and otherwise he's totally OK with ...

"The Supreme Court has held that that activity is a protected First Amendment right," McConnell told reporters on Tuesday. "In this country, we have a long history of protecting unpleasant speech." McConnell, the Senate's top Republican, added that he supports the Supreme Court's 1989 decision in Texas v. Johnson that ruled flag burning to be free speech.

Oh. He doesn't like it when Trump tweets malarkey about pissing on the Constitution and revoking the citizenship of people who burn the flag either. Why's McConnell gotta be such a turtle-headed killjoy, when all President Trump wants to do is undermine our elections and break the Constitution? TRUMP THOUGHT PRESIDENTING WAS GONNA BE FUN, YOU GUYS.

Maybe another Republican senator will be nice, like John McCain. Now, we know McCain is le pissed about how Trump likes to do circle-jerking 69's with Vladimir Putin (ALLEGEDLY, sort of), but maybe he'll be cool about the flag-burning thingie ...

"I have not been commenting on Mr. Trump and I will continue not to comment on Mr. Trump," McCain told Raju. [...]

"I do not comment on Mr. Trump's comments. I am not and will not," he said. "Because that's my choice ... I will continue to not because I have to defend this nation. I'm the chairman of the Armed Services Committee. We have all kinds of challenges. My time is devoted to trying to make sure this nation is secure. Not to comment on every comment of Mr. Trump's."

John McCain AIN'T GOT TIME FOR TRUMP'S SHIT. McCain has a country to run, goddammit, and we are surprisingly grateful for that.

The tone of this post is optimistic, because it seems Trump ain't about to get the free mustache ride he thought the presidency was going to be, and also CAN YOU TELL HOW FREAKING EXCITED MITCH MCCONNELL AND JOHN MCCAIN ARE?

Can you imagine for one second in 2008, if Harry Reid had been like "Obummer? BUT I JUST MET HER!" and refused to comment on anything the president-elect said?

LOLOLOL, what a dumpsterfuck the next four years will be, thanks to a solid minority of American voters.