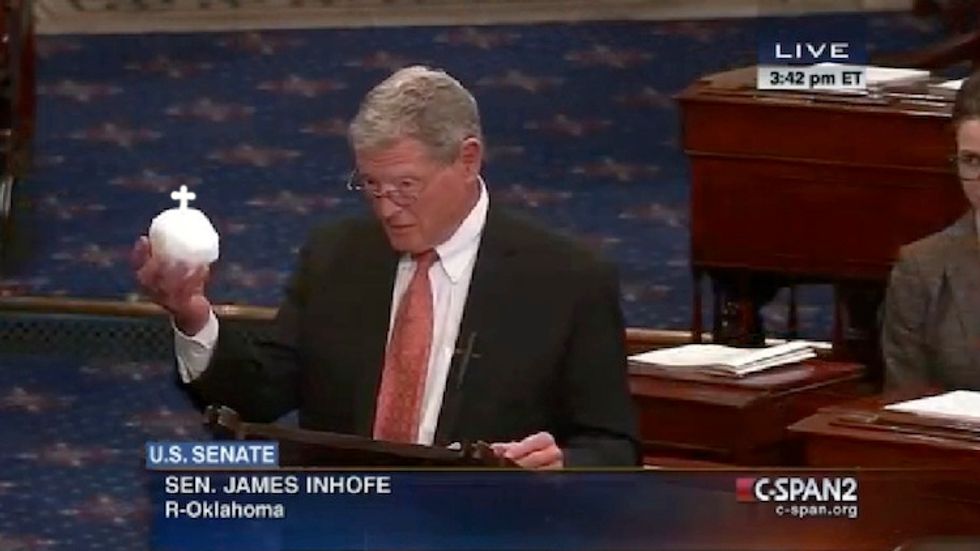 Sometimes Yr Wonkette thinks it might be "fun" to actually be located in Our Nation's Capital, rather than in the wilds of Boise, Idaho, if only because it would then be possible to attend fun events like the Heartland Institute's "climate conference" being held this week in DC, where Sen. James "If Global Warming Is Real Why Is There Snow?" Inhofe told Pope Francis to keep his mind on poping and to leave climate science to idiots on the payroll of Big Oil.

The senator from Oklahoma was so proud of his snowball-in-the-Senate trick that he kept a video loop of it running behind him as he spoke. Hah, that'll teach those snotty scientists and that dumb ol' pope what real science is! Like Rick Santorum before him, Inhofe was terribly offended that the pope would dare have an opinion on the reality of climate change, which everyone getting $2 million in contributions from the oil industry knows is a hoax.

But the pope is preparing to issue an encyclical on the need to reduce carbon emissions so the planet's temperature will still maintain large mammals that write both encyclicals and climate-denying websites, so it was very important for attendees of the Heartland Institute's DenialPalooza to explain just how poorly-informed Pope Francis is:

Inhofe -- a Presbyterian, and thus freer to mock the Bishop Of Rome than that papist Santorum is -- had little patience for the pope's interference in domains he knows nothing about:

“Everyone is going to ride the pope now. Isn’t that wonderful,” he said. “The pope ought to stay with his job, and we’ll stay with ours.”

A few moments later, Inhofe said: “I am not going to talk about the pope. Let him run his shop, and we’ll run ours.”

We just checked, and while actual Pope Rides ("must be this tall to ride the Pontiff") are not yet available, we would note that Francis is pretty popular with Americans. Large majorities of both Catholic and Protestants view him favorably -- while most Americans' opinion of James Inhofe is "Wasn't he in Baywatch"?

Despite his suggestion that the pope should stick to spiritual matters only, Inhofe did feel free to advise attendees at the Heartland Institute conference that they need to get out there and vigorously fight new EPA limits on carbon pollution, framing the battle to protect Big Oil as a holy war: “If we do it as a team you will be doing the lord’s work, and he will eventually bless you for it. Amen.”

Reached for comment on Inhofe's suggestion that He approves of making Earth's climate unlivable through continued greenhouse gas emissions, the Lord Of Hosts replied, "Inhofe? Loved him in Knight Rider, and I know he's big in Germany, but he doesn't know dick about My Creation. Where's my smitin' stick?"

[The Guardian via TPM]