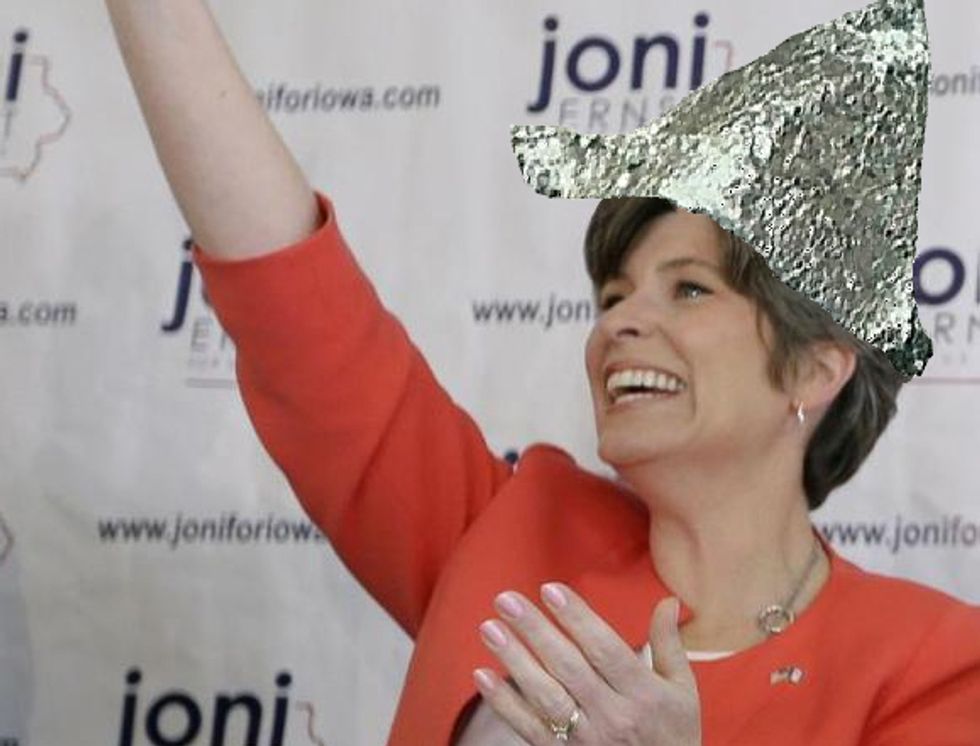 You may be astonished, as we were, to learn that conservatives are furious with Barack Obama for waiting Five Whole Days to order the flag to be flown at half staff in honor of the victims of last Thursday's shootings in Chattanooga, which killed five members of the military. Obviously, Obama hates the military, since he only called the killings "heartbreaking" the day they happened, and didn't immediately lower the flags himself. (By contrast, Obama ordered flags to half staff the day after the 2009 Fort Hood shooting.) But Sen. Joni Ernst thinks she may know what Obama's up to: He's trying to distract us all from the Iran nuclear deal.

Please ignore that Obama spoke at length about each of the victims during a speech at the VFW Tuesday, after which he issued the order to lower flags nationwide. Be especially careful not to ask why the House and Senate also waited until Tuesday to lower the flag at the U.S. Capitol. The real scandal is all on Obama. During an interview on an Iowa talk radio show, host Simon Conway asked Ernst what the heck was going on with the flag and Obama's dishonoring of the dead: “I think there’s something else going on because I think he wants us talking about that and not the other thing, whatever the other thing might be.”

Ernst agreed that it was shameful, and that she was "confused as well," adding that there must be something rotten at work:

That Obama is always so crafty and incompetent! What is he up to this time in his sneaky bumbling plotting? Also, isn't there a verse in the Koran that requires flags to remain flying at full staff after a massacre? Just wondering, we think we saw it somewhere on the Internet.

In contrast to the unpatriotic Obama, super-patriotic hair mass Donald Trump on Tuesday ordered flags at all Trump properties to be lowered to half-staff a few hours ahead of Obama did, after a respectful five-day period to allow Tennessee to mourn its own. It's unlikely that Trump will face any significant fallout for mistakenly referring to the dead as "soldiers," rather than as Marines and a sailor; had Obama made a similar error, it would have led every conservative blog this morning.

The Washington Post was careful to debunk at least one flag-related rumor that popped up in social media, noting that it was Gov. Chris Christie, not President Obama, who ordered flags in New Jersey to be flown at half staff after the death of Whitney Houston, despite the indignant complaints of former sportsball man Curt Schilling on Twitter:

As of press time, it is unclear whether Sen. Ernst, who is a fan of many other fun conspiracy theories, plans to avenge the insulted Marine and Navy victims by impeaching Obama, or merely castrating him.