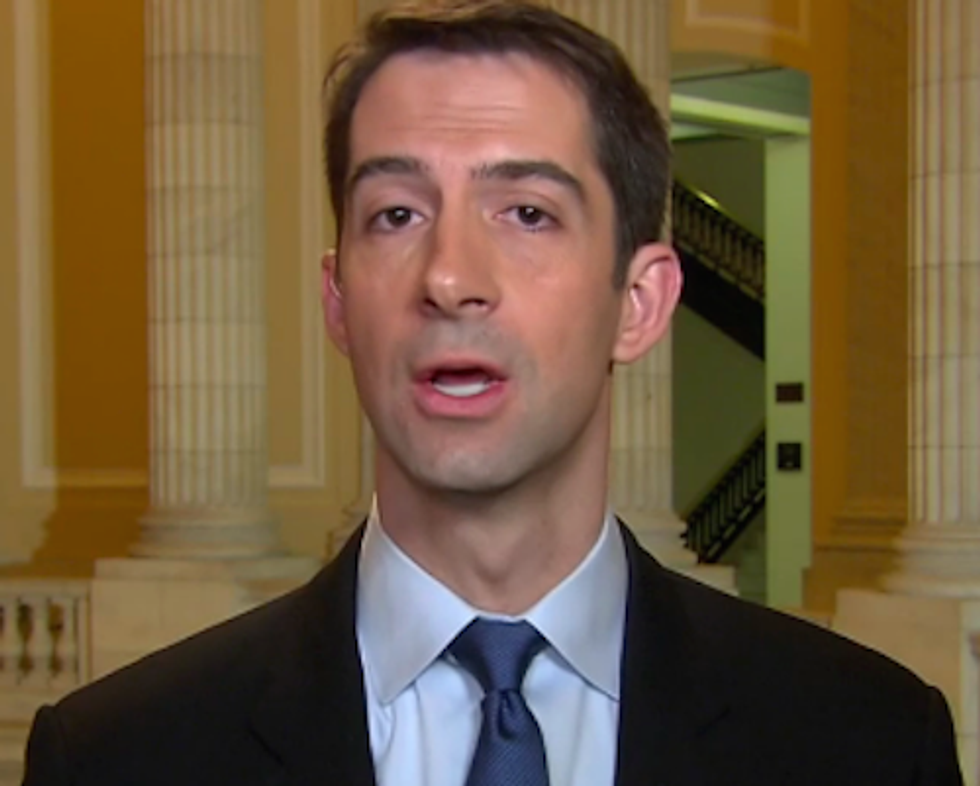 Your favorite brand-new, wet-behind-the-ears senator from Arkansas, Tom Cotton, is doing his ankle-biting, yappy Pomeranian thing at Iran again. After his love note to the Persian nation -- the one what said Barack Obama isn't REALLY president, therefore their nuke deal was DOA -- didn't work out so well, you'd think one of his trainers would have popped him on his nose enough times that he would have learned his lesson, but some pooches are untrainable. It's usually because they've been abused by a previous owner, don't judge.

After Cotton's letter managed to elicit LOL giggles from Ayatollah Fucking Khamenei himself, Cotton though it would be a super idea to see if he could give Iranian Foreign Minister Javad Zarif a good Arkansan talkin'-to on the Twitter machine. Why? Because Zarif made fun of him, saying Wednesday at New York University that once the Iranian nuke deal is signed, sealed and delivered, he fully expects the UN Security Council to drop sanctions against his country, "whether Sen. Cotton likes it or not."

So Cotton blew his little puppy dog fuse and was like "You said my name? YOU SAID MY NAME?!"

That's quite the yapping, Sen. Cotton! Did you bare your teeth and everything? And also, is the senator aware that "debating the Constitution" is probably not high on Zarif's agenda, since he's the foreign minister of IRAN, and -- trivia fact -- the United States Constitution is not the boss of him?

Zarif responded, just once, and flat-out BURNT Cotton, the Yapping Purse-Dog of the Ozarks:

Thank you, Sen. Cotton, for yet again giving the Iranian government another reason to giggle uncontrollably at the United States, while the real adults in our government do the hard word of hammering out diplomatic deals to try to prevent a volatile nation from building nuclear weapons. You're really helping out!

[US News viaCrooks and Liars]