Sen. Tom Cotton Says Gays Should Be Glad They're Not Hung 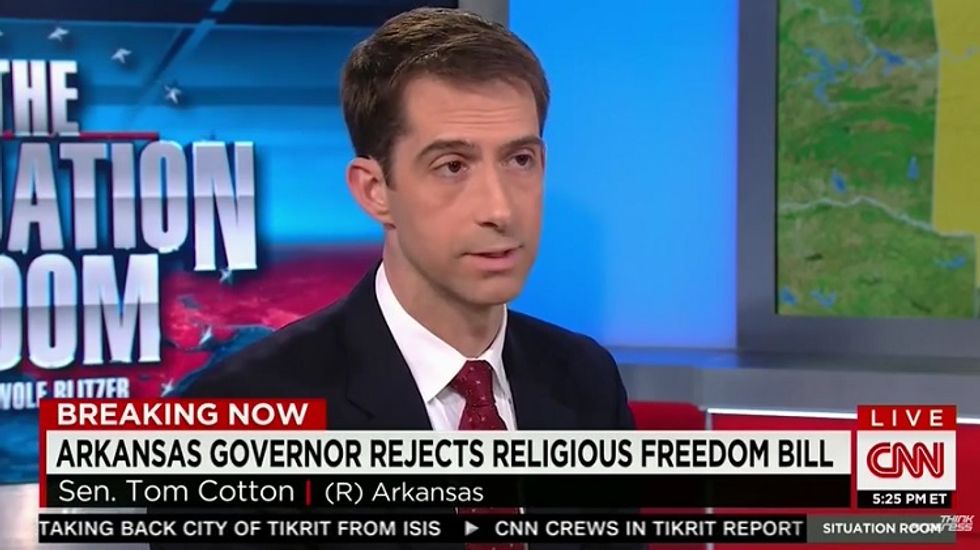 Arkansas Sen. Tom Cotton (R-Logan Act) has just about had it up to here with people fussing about "religious freedom" bills in Indiana and Arkansas, when we have far more important fish to fry, like undercutting the President on nuclear negotiations with Iran. Or, probably, Benghazi (Never Forget!).

On CNN's Situation Room Wednesday, Cotton told Wolf Blitzer that there's nothing bad about religious freedom, and noted that former Arkansas Gov. Bill Clinton had signed the federal Religious Freedom Restoration Act, and nobody accused him of anti-gay bigotry (at least not until he also signed DOMA). Besides, said Cotton, people really need to understand that there are far worse things than not getting your gay wedding catered by a Christian pizzeria run by Irish people:

I think it’s important that we have a sense of perspective about our priorities. In Iran, they hang you for the crime of being gay.

That's nice! We were sort of hoping Cotton would go on to point out that American feminists should be delighted they're not required to wear burqas; that factory workers should be grateful they don't live in China; that The Blacks should thank God their ancestors were brought here 400 years ago so they don't live in Africa; and perhaps that Republican senators who don't like the President should thank their lucky stars they're not opposition lawmakers in Russia.

But perspective really is the important thing, Cotton continued, because a little domestic injustice ain't nothin'. He doesn't want Wolf Blitzer to ask dumb questions about The Gays, those lucky un-executed duckies, he wants to talk about Iran:

So stop your complaining, The Gays, and do something about Iran, will you? Also, have a nice dish of this red herring, it's very tasty.

Following his interview with Blitzer, Sen. Cotton visited a farm in Virginia to participate in the construction of an actual man out of straw, then was driven to Washington's RFK Stadium, where they needed some help moving the goalposts.