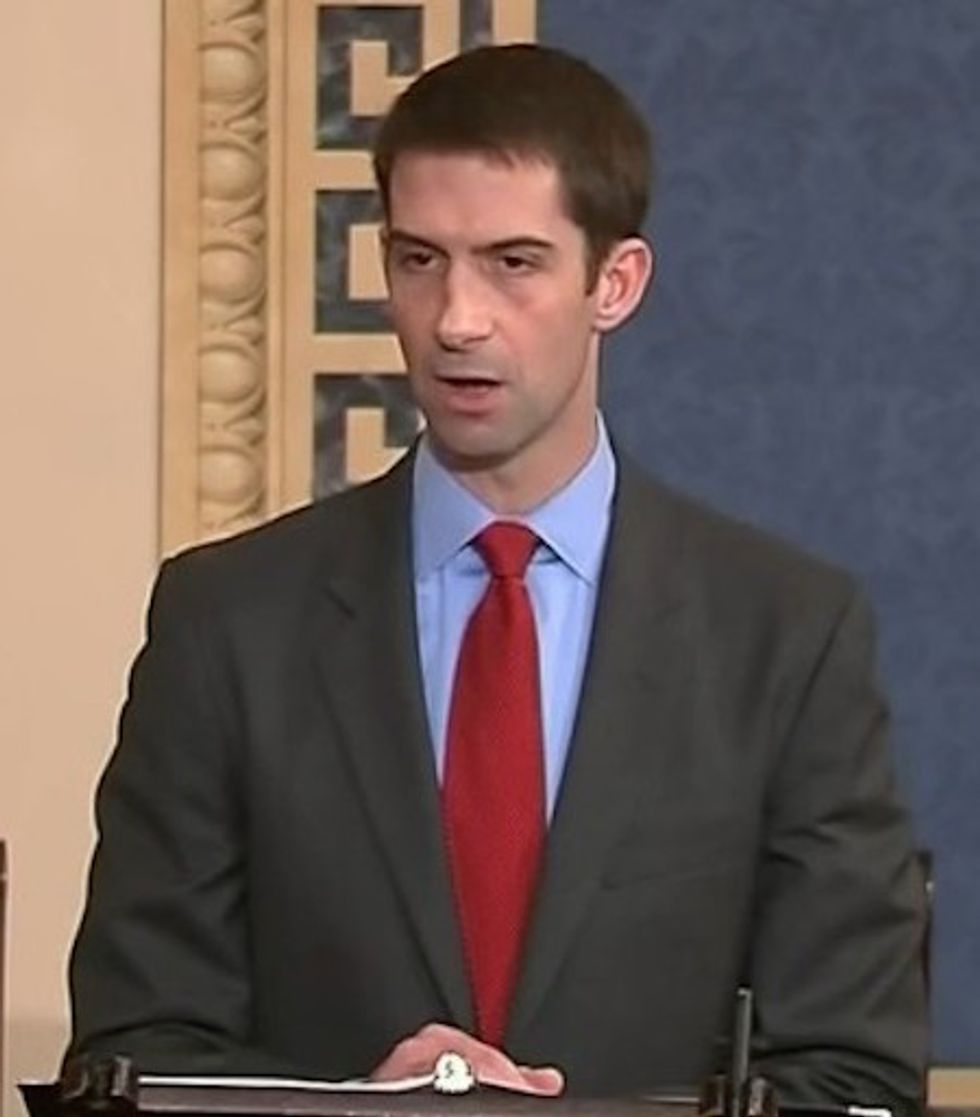 Tom Cotton, the freshman tea party senator from Arkansas who's already made quite a name for himself (and that name is "Traitor"), is making friends and influencing people ALL over the place. Just when Senate Republicans and Democrats were about to enjoy one of those rare moments of agreeing on something -- in this case, legislation saying that Congress has a REAL BIG DICK, so it gets to have a say-so in any agreement on Iran's nuclear program -- Sen. Cotton had to fuck everything up, with the help of Sen. Marco Rubio, who doesn't even give a damn anymore because he's quitting the Senate anyway to go not be president:

[They] employed a rare procedural move to push amendments to end Iran’s nuclear program and call for Iran to acknowledge Israel’s right to exist, which appeared to be a transparent effort to undermine the whole deal.

Cotton has somehow decided that he is A Expert on Iran, which is governed by Cotton's personally annotated copy of the U.S Constitution [ed. note: we looked it up, but that's not actually true]. All of which means President Obama does not have the authority to negotiate with Iran, only Tom Cotton does. The senator's GOP colleagues were just fine with that when they signed on to his letter saying yup, that sounds right to them, SUCK IT OBAMA. And then they apparently empowered Cotton to negotiate directly with Iranian Foreign Minister Javad Zarif, on Twitter, which did not go so well.

So while it was fine and dandy and uber-patriotic to undermine the Obama administration's efforts toward a deal with Iran, it is SOOOOO not OK to undermine Senate Majority Leader Mitch McConnell's efforts to make a deal with Democrats, and now the whole GOP kind of hates that back-stabber Tom Cotton. As they should. Not that he cares:

Mr. Cotton remained unapologetic. He berated his colleagues from the floor last week, saying if they did not want to vote on the amendments offered by him or Mr. Rubio they should “host a talk show” or find another occupation.

Oooh, sick burn! Maybe those mad debating skillz are why he thought he could go up against Iran on the interwebs and win. Rubio, meanwhile -- who, as we have previously mentioned, is not that smart -- tried to blame Democrats for the whole mess by claiming, "The only thing blocking votes is the Democrats refuse to allow any votes on additional amendments." Too bad none of the other Republicans in the Senate think so. Of course, now Democrats aren't feeling very bipartisan either. Good job, fellas!

“The delicate compromise that came out of the Foreign Relations Committee is a really fine piece of work,” said Senator Harry Reid, Democrat of Nevada and the minority leader. “We tried to offer as much as we could until we realized every amendment the Republicans offered was to denigrate and hurt and destroy that bill. We’re not going to do that. Senator McConnell has the ability to get that bill adopted. He’s got to do it. We’re not going to do it for him.”

So, let's do some quick math. Cotton had already pissed off every single Democrat in America by trying to upstage the president, and now he's alienated Republicans by acting like he's the boss of them too. Who's left for him, other than half-wit soon-to-be-unemployed Marco Rubio? Cotton might be Lord God POTUS of the Universe in his own mind, but that's about it. Given how quickly he's losing fans, he might want to hold off on his own presidential run after all.