Senate Cafeteria Cook Is On Food Stamps, Must Be One Of Those Moochers GOP Always Talks About 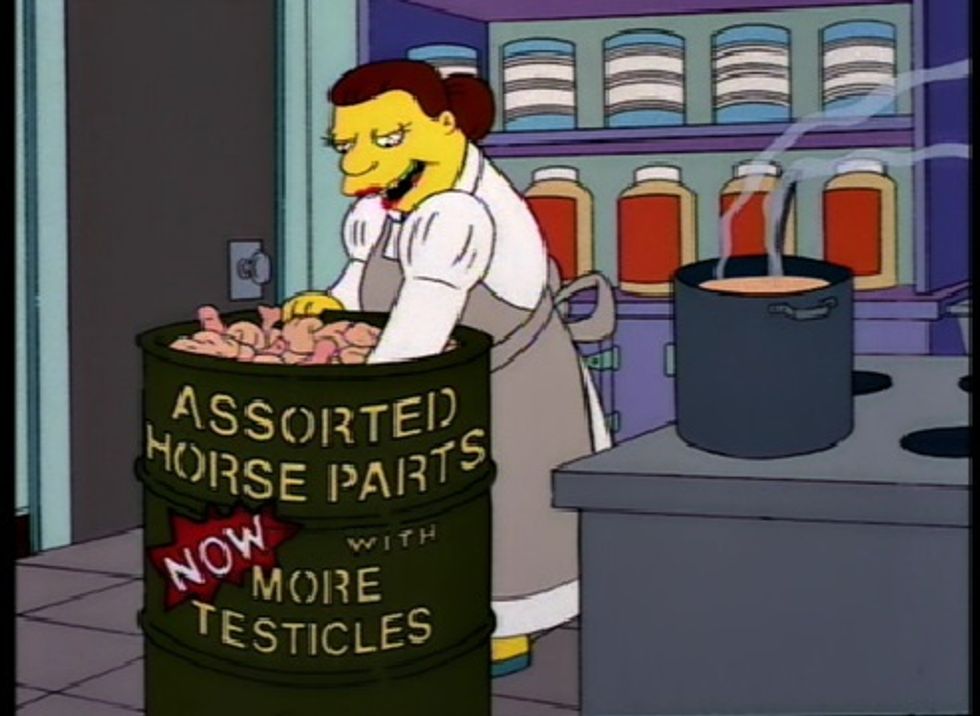 There is a piece in The Guardian written by Bertrand Olotara, one of the many service workers who ensures that Congress even HAS a place in which to grandstand, or alternately, sit around and do nothing. Olotara is a cook in the Senate cafeteria, and he and his fellow workers, employees of a government contractor, are pissed off, and they are striking. You see, Olotara, who cooks every day for senators and their staffers (when they're not eating free Taco Bell or Chick-Fil-A), is on food stamps, because he is a single father, and he can't afford to put food on his family on the $12 an hour he is paid to shovel gruel into Ted Cruz's wordhole:

Every day, I serve food to some of the most powerful people on earth, including many of the senators who are running for president: I’m a cook for the federal contractor that runs the US Senate cafeteria. But today, they’ll have to get their meals from someone else’s hands, because I’m on strike.

I am walking off my job because I want the presidential hopefuls to know that I live in poverty. Many senators canvas the country giving speeches about creating “opportunity” for workers and helping our kids achieve the “American dream” – most don’t seem to notice or care that workers in their own building are struggling to survive.

Yeah, well, maybe Olotara should stop sitting around eating bon bons and booking Caribbean cruises from the comfort of his Obamaphone and get a second job! Oh wait, he already did that. He has a second job at a grocery store -- presumably not one of those separate but unequal welfare food pantries Wisconsin is proposing, but a real grocery store. He works 70 hours per week, but come on, the week has 168 hours. What's he doing the rest of the time? Smoking drugs and watching Maury, probably. But yeah no, that is not what he is doing.

Maybe he should pull himself up by his bootstraps and get a better-paying job(s)! It's gotta be that simple. Because we hear these sorts of things are always the welfare recipient's fault, because they're too lazy, and their situations NEVER EVER have anything to do with institutionalized problems like low minimum wages or income inequality.

I’ve done everything that politicians say you need to do to get ahead and stay ahead: I work hard and play by the rules; I even graduated from college and worked as a substitute teacher for five years. But I got laid-off and I now I’m stuck trying to make ends meet with dead-end service jobs.

Shit, this guy just won't follow ANY of the rules of what Rush Limbaugh tells us people on food stamps are like. Surely he's cheating the system in some way! Maybe if he prayed some more, Jesus would find favor with him, and he wouldn't need food stamps, because after all, being poor tends to indicate some moral failing, doesn't it?

I’m a Bible-believing Christian, just like a lot of the candidates. Scripture says to “Love your neighbor” and “Do unto to others as you would have them do unto you”. It’s a shame too few candidates follow the guidance of the book in which they say they believe.

Burn! But also, this man is doing poorness ALL wrong! He works hard, at TWO jobs, he's willing to do whatever it takes, and he even prays! It's like he's an actual human being or something, and not a stereotype. Then why the hell is he in this situation, Ted Cruz, Marco Rubio, and the rest of you?

Olotara points out that his employer, Compass Group, is based in the UK, and that they have a contract renewal coming up, which is why the employees are striking now. Their demands are pretty simple: "[t]o make sure that federal contracts are preferentially awarded to good American companies that pay workers a living wage, offer decent benefits like paid leave and allow us to collectively bargain so that we don’t need to strike to have our voices heard."

Living wage? Collective bargaining? Sorry, that's not going to happen in the GOP's America! That's LIBERAL STUFF. How can Republicans keeping fucking the poors, if poor people have power?

Olotara says he would love to speak to the 2016 candidates, pointing out that "they know where to find me." Ha ha, because he works in the Senate cafeteria, cooking the fancy foodstuffs they need! Hopefully they aren't so far up their own asses that they can't stop and have a little talk with the people who work every day to keep their wingnut bellies full. Otherwise they might find a "special sauce" in their mac 'n' cheese next time, not that these people would do anything like that. OR WOULD THEY? Nah. (But they could!)