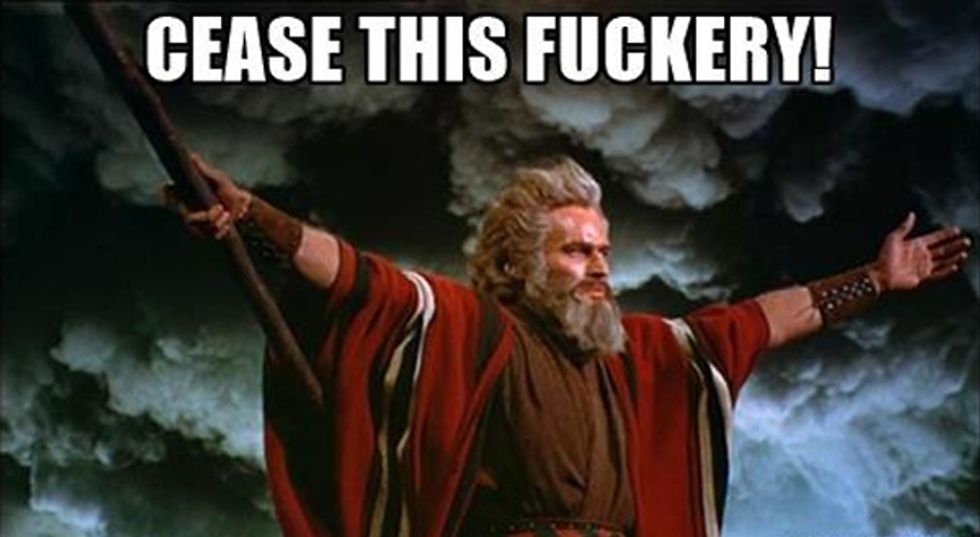 All the fuckery. There is so much of it.

After voting yesterday to open debate on killing the Affordable Care Act, Senate Republicans have so far failed to pass a procedural vote on the "Better Care Reconciliation Act" and are moving forward with a vote on a straight repeal of the ACA, which is also expected to fail. Their goal now is to find something, anything, they can pass with 50 votes, which would then become the basis of negotiations with the House for something they'll call an Obamacare repeal, with or without a replacement. We are now at the "Confused Clusterfuck" stage in the Senate's majestic process of lawmaking.

Tuesday evening, the Senate voted 57-43 to reject the most recent version of BCRA (which we learned on TV can be pronounced "bic-ra" if you want), which included Ted Cruz's insane proposal to split the individual market into junk insurance for they young and good insurance for the old and sick, which is a bad idea for spreading the risk pool around. Nine Republicans bolted on that vote, including rightwingers Mike Lee (who helped Cruz write his amendment) and Rand Paul, who thought the bill retained too much of the ACA, as well as "moderates" like Dean Heller, Susan Collins, and Lisa Murkowski. John McCain, who made quite a show of vowing he would never ever ever vote for the BCRA since it was drafted in secret and was very bad, voted for the damned thing anyway, although his office issued a statement saying it didn't count since it was a "procedural" vote on debating BCRA, and he really is opposed to the bill. Since that version of the bill would have required a score from the Congressional Budget Office, it would have needed 60 votes to pass. Big fail there, big fail.

Right now, the Senate is voting on a repeal of most parts of the ACA with no replacement, putting off implementation of repeal for two years, during which Republicans would magically agree, finally, on an excellent replacement. That vote was supposed to occur this morning, but was delayed; it's not expected to pass, either, largely because the CBO projected it would leave 32 more million people uninsured when an earlier version of the bill was passed in 2015, then vetoed by Barack Obama.

The newest fad for all the Republican teens is a "skinny repeal," which is made with whipped skim milk and tastes like foamed air. It would "only" repeal a few provisions of the ACA: the individual mandate to purchase health insurance, the mandate for companies with more than 50 employees to provide health insurance for their employees, and a repeal of the medical device tax. But those first two would be quite enough to throw the individual insurance market into a "death spiral," since there would be no incentive for young, healthy people to have insurance in the first place. With no penalty to be paid, people would wait until they're sick to buy insurance, and individual insurance would soon become unaffordable.

As Jonathan Chait at New York magazine says, the "skinny repeal" isn't a real plan or a real proposal; instead, the point is to

reduce the repeal agenda to its most popular constituent elements, pass something that 50 Republicans can live with, and then create a chance to go to conference with the House and rewrite the proposal. Republicans are very clear about their belief that the skinny plan is not intended to be passed into law. “If we can get a skinny bill over (to the House), we can work in the conference committee to actually improve on the product,” South Dakota Republican Senator Mike Rounds told reporters. The “content” of the bill is not the point, says Senator Bob Corker, who calls it a “forcing mechanism.”

So once something gets to the conference committee, what beautiful joint healthcare plan would they come up with? Fuck if anyone knows. They just came up with the "skinny repeal" ruse a few days ago, so why would they be thinking any farther than "go to conference and come up with a thing"? But it would get 50 Republicans on record as having voted to repeal Obamacare, and isn't that all they need to do to get reelected? Maybe they'd come up with some kind of replacement plan they could pass and that Donald Trump could sign, too.

Why would anyone think the details of what happens to people's healthcare matters to these guys? They made a promise to repeal Obamacare, and that's all they really care about, because then they won't be primaried from the right.

Yr Wonkette is supported by reader donations. Please click the "Donate" linky and we'll keep you updated on all the repeals: skinny repeals, fat repeals, mocha soy repeals, whatever they have.