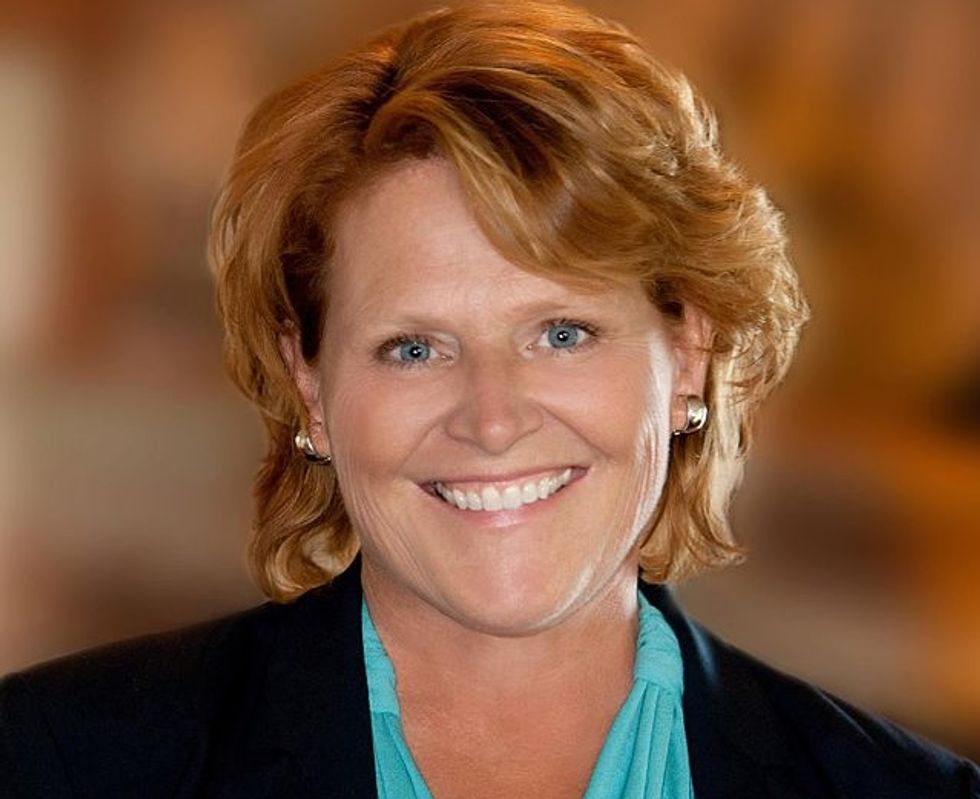 Somehow resistant to the persuasive skills of Donald Trump

If there's a theme to this year's hopes for Democrats to take back the Senate, it's that every goddamn seat matters. Progressives might wish for a whole Senate full of Elizabeth Warrens and Sherrod Browns, but they won't be part of a Democratic majority at all if we don't also defend seats held by centrist Democrats in red states, because that's the math. Oh, and also because centrist Dems vote the way we'd prefer a hell of a lot more regularly than any "moderate" Republican ever would, as evidenced by the support of Lisa Murkowski and Susan Collins for the Big Fat Tax Cuts For Rich Fuckwads Act of 2017, which not incidentally killed Obamacare's individual mandate. Somehow, pointing that out makes us despicable corporate shills, which is why it's so much fun being a liberal these days.

With that in mind, let's take a look at the North Dakota US Senate race, where incumbent Dem Heidi Heitkamp is seeking her second term and running against Republican US Rep. Kevin Cramer, who was personally lobbied to run against her by Donald Trump. Cramer is the state's single member of the House, so that means his seat will be open, hurrah. In an interview with the Washington Post earlier this week, Heitkamp revealed that long before Trump sought a Republican to run against her, Trump had tried to convince Heitkamp to switch parties herself. At a Trump Tower meeting with Heitkamp in December 2016, said Heitkamp, the two were talking about deregulation and some other issues where Heitkamp might support Trump when the "president"-elect suggested she'd make a dandy Republican:

"He says, 'You should switch parties,'" Heitkamp said, when questioned by The Post about whether Trump courted her to switch parties. She responded with an ask of her own.

"I said, 'You should give me an Ex-Im bank,'" the senator said, with a chuckle. It was a reference to the Export-Import Bank, an agency she was pushing to make fully operational.

You will all be glad to know that it looked like about a fifth of the WaPo comments were from indignant grammar nerds protesting that "ask" should never be used as a noun. Yr Dok Zoom, an inveterate descriptivist, says usage determines correctness, even if the usage started with MBAs, so deal with it.

Oh, yes, and also there's the politics stuff: Trump apparently repeated the ask last September, when he gave the North Dakota congressional delegation a ride on Air Force One to an event pushing the Republican tax plan at an oil refinery in Mandan. At that event, Trump invited her onstage and offered what looked like support:

“Come on up, senator,” he said, motioning to Heitkamp. “These are great people. They work hard. They’re for you, 100 percent.”

As Heitkamp stepped onto an outdoor catwalk at an oil refinery here in Mandan to join him onstage, Trump delivered play-by-play commentary.

“Everybody’s saying, ‘What’s she doing up here?’ ” Trump said. “But I’ll tell you what: Good woman.”

Ah, but then she went and ignored that effusive praise and voted against the Tax Cuts for Rich Fuckwads, and didn't even become a Republican just because he asked her to, so Trump pushed Cramer to run against her. After all, he closed that attempt to gt schmooze all over her with a warning: "Do your job to deliver for America or find a new job. Do something else. Just do something else." We wouldn't be at all surprised if Trump felt personally insulted by Heitkamp simply voting with her party instead of for his gift to the rich.

But at least Heitkamp has some footage to run in ads aimed at crossover voters, which she'll need -- North Dakota went for Trump by 36 points over Hillary Clinton. That's the landscape in which she has to run: a state that still strongly supports Trump, and which has traditionally voted Republican.

Trump currently has an approval rating between the mid-50s and 60 percent (depending on the poll) in North Dakota, although it remains to be seen whether the state will continue to stand by him if Chinese tariffs on agricultural products continue to pinch all those farmers Trump has enlisted as foot soldiers in his trade war. North Dakota does a hell of a lot of that agriculture stuff, and sells 2/3 of its soybean crop to China -- or did, at least before China slapped a 25 percent tariff on soybeans.

Heitkamp is no dummy, and her Senate website has been a veritable font of press releases pointing out that this trade war is really really bad for her state. She keeps warning Trump that trade wars are not good for farmers and other living things, and if the economic hit on North Dakota continues, Trump's claims to be for Everyday American Folks may fool fewer and fewer North Dakotans. Heitkamp remains generally popular in the state where she's perceived as independent, while Cramer is seen -- rightly -- as a rubber stamp for the Trump agenda. At the state's Democratic convention in March, Heitkamp touted her votes to preserve the Affordable Care Act, and was enthusiastically supported by Joe Biden.

In one of the stupidest rightwing attempts at a smear that we've seen this morning, we learned while prepping today that back in January a North Dakota political blog offered this really stupid headline and still image suggesting that Heitkamp just looooooves aborting little babbies! The image was taken from CSPAN during voting on the GOP bill to ban abortions after 20 weeks, which failed to get enough votes to get past a filibuster.

Oh, except for how that only looks like a "high five" in a still screenshot; on video, as Politifact points out, it's more of a wave that turned into an awkward hand clasp that became a handshake. There is no high-five palm-slapping there. (And yes, this is where Yr Wonkette tells you all it's also dishonest to post still images of Laura Ingraham waving at the Republican National Convention and pretending she was giving a Nazi salute. Knock that shit off.) Nonetheless, the story circulated in the WingnuttoSphere, and has even resulted in a bullshit anti-Heidkamp website called HighFiveHeidi.com. Why let fake news go to waste? Besides, everyone knows Democrats love baby murder even more than sportsball, which they only watch for the flag abuse anyway.

As for Kevin Cramer, he's that dickweasel who shot a campaign ad in a veterans cemetery without permission, which he would not have gotten, because who the hell does politics in a veterans cemetery? NOT ALLOWED. Cramer added to the stupid in 2014 when he said he'd pull the ad, but then left it up on YouTube. Four years later, the ad's finally gone, but here's Rachel Maddow showing some clips.

As for his voting record, yeah, he's a Trump Republican, and we say the hell with him. Heidi Heitkamp voted to protect abortion rights, to protect the ACA, and voted against confirming Betsy DeVos, Jeff Sessions, and Mick Muvaney, so she's automatically a million times better, and you can send her campaign some money right here, the end.

Yr Wonkette is supported by reader donations. Please click here to help us cover all 33 Senate races this year. Yes, that was an ask.