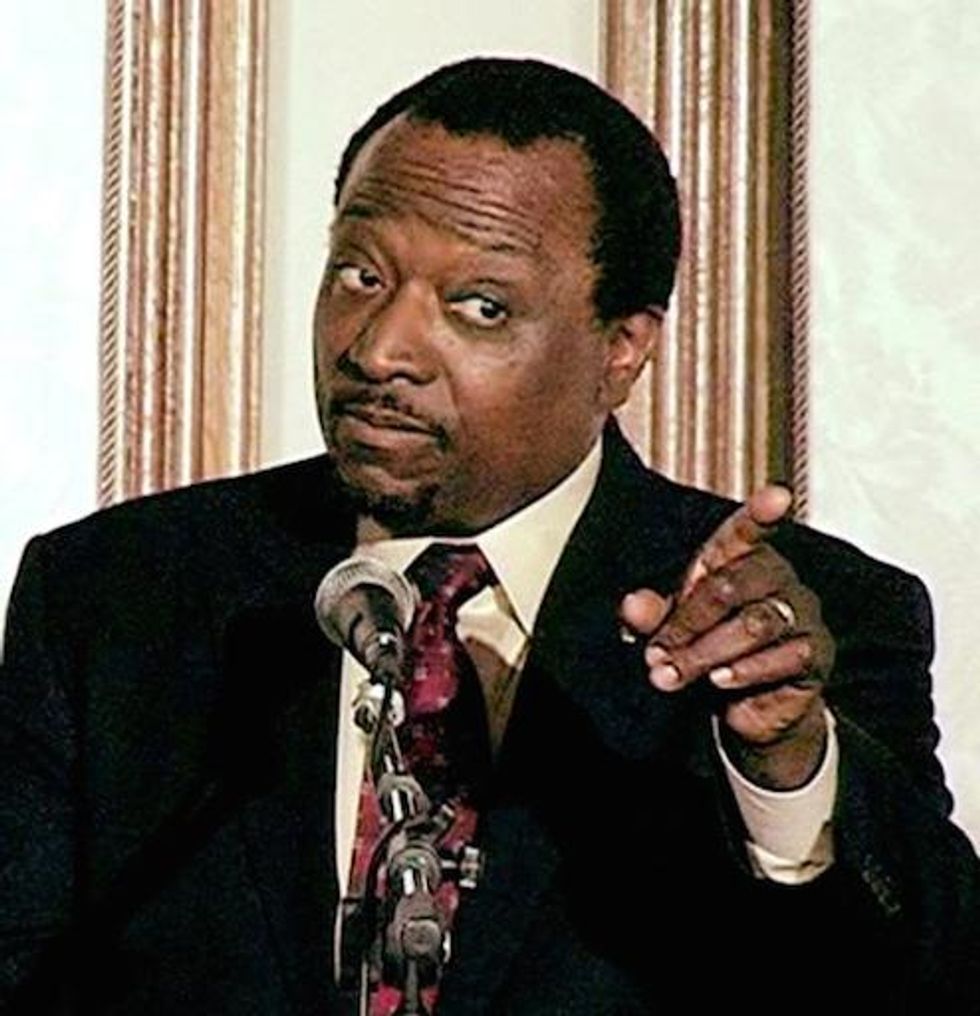 We never fail to be amused by WND's shameless overuse of the word "exclusive" to refer to basically every post on their nonsense site. One of their latest exciting exclusives comes from our old friend Alan Keyes, who wrote an entire post about how one of his Facebook friends asked him a question, and Alan Keyes was so very taken by the query that he had to take to the extremely elite pages of WND to answer. Was it about Barack Obama and how Alan Keyes gonna impeach him so good, for Jesus? Of course it was!

So some Alan Keyes sycophant wanted to know how it would help to impeach Obama in the House if the Senate wouldn't go along for that stupid joy ride and also something about God.

Hello, Dr. Keyes. Even if the House were to impeach … you’d never get the Senate to convict. … What’s the point when the corruption extends into both parties and into both houses? Perhaps the following should be our main goal; we as a people MUST return to a loving relationship with God … we as a people MUST return to virtue. Is this not far more important than “the impeachment field -- ripe for the harvest”?

So weird how questions to Alan Keyes sound pretty much like Alan Keyes wrote them! Anyway, Alan Keyes was very happy to hear from his Facebook friend, because it gave him an opportunity to write one bazillion words about how stupidly tilting at impeachment windmills is doing God's work. Honestly, we have read this Alan Keyes EXCLUSIVE letter to his Facebook pal, and we cannot for the life of us figure out if he thinks impeachment would be successful or not.

I would respectfully ask that before drawing conclusions about what I am saying you actually read through what I write and have written about impeachment and the Pledge To Impeach Mobilization. It is all about gathering the political will needed to use the 2014 midterm elections to change the situation in Congress by leveraging the votes of the large and growing number of citizens who agree that Obama and all those collaborating with him must be removed from office, using the means the U.S. Constitution provides.

Seriously, can you guys figure that out? Is he saying that impeachment is just a tool to rouse the tea party rabble, because that seems about right, or that if Alan Keyes and friends take over Congress in 2014, then he can impeach Satan Obama? Either way, you should work to impeach Bamz because that is totally like praying and tithing and doing missionary work all rolled into one.

Do this as an act of good faith, predicated upon the principles of America’s independence as a nation. Do this as a prayer to the Creator God whose authority over justice those principles acknowledge. Do this so that once again our nation may deserve to enjoy the blessings of that God-endowed liberty which has been, and by our faithfulness may yet continue to be, our common hope; our common life; our common good.

Oh, and you should also totally donate to Alan Keyes Kool Impeachment Party, which may or may not actually be serious about impeaching Obama.

We're confused about one thing. Why did God abandon us and force evil Obama on us in the first place? Do we have to read that When Bad Things Happen To Good People book again, just like junior high? We'd ask Alan Keyes, but we don't think we could bear the Edwards Gibbons-esque treatise that Alan Keyes would write about the decline and fall of America, so we'll let the whole thing remain a beautiful mystery.