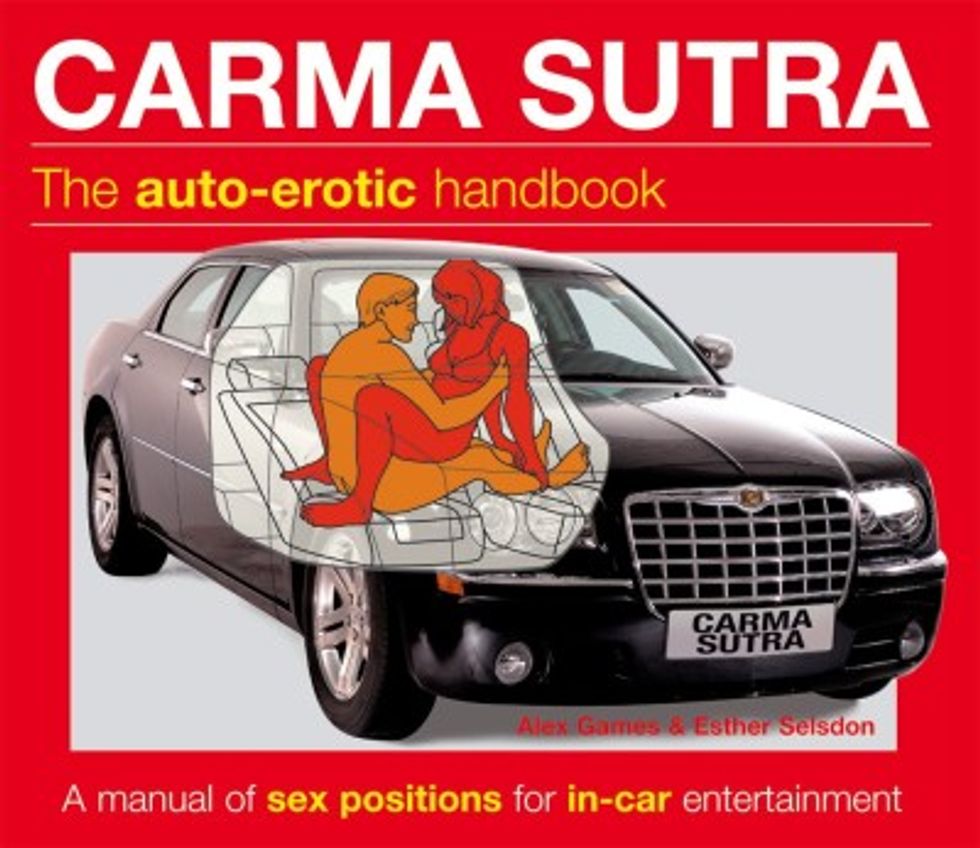 Wonder if they have this book?

Did you hear about these two crazy kids in Minnesota? They are Republican state Reps. Tim Kelly and Tara Mack, and they are married, but not to each other. They were caught doing normal Republican legislator stuff to each other in a parked car in a public park, if by "normal" you mean that Kelly was doing some sort of sexiness to Mack's bathing suit area, which was exposed due to how her pants were down. Their excuse at the time? They were EXCHANGING DOCUMENTS. And hey, benefit of the doubt. Maybe IN HER PANTS is where Mack keeps her "documents." Or maybe she keeps her lady garden there. Whatever she had in there, Rep. Kelly sure seemed interested in it!

At first they were like, "That park ranger is a liar, we don't even HAVE genitals," you know, the way Republicans do when they get caught improperly using their genitals. But instead of going the route of horny Michigan teabaggers Todd Courser and Cindy Gamrat and digging themselves further and further  by creating fake gay sex bribery whatever-the-fuck scandals to cover up their reg'lar hetero sex scandals, these Minnesota fuck-birds have instead decided to voluntarily step down from their positions on the state House Ethics Committee (LOL), and they are apologizing for calling that park ranger a liar, probably because they would really like to continue being state representatives.

Mack says she is very sorry for showing that park ranger her ass, in all the ways one can show one's ass to a park ranger:

Since becoming a State Representative in 2009, I have been a strong supporter of our men and women in law enforcement. I understand that the Park Ranger was trying to do his job. I have the utmost respect for the work law enforcement does to keep Minnesotans safe and I apologize for offending these great men and women.

Kelly says he is sorry, also too.

But here's a weird thing. Before Mack and Kelly were calling everybody a liar, Mack wasn't all that upset with the ranger:

The email, which Dakota County Sheriff Tim Leslie sent to himself, recapped conversations with Mack suggesting she wasn’t always so appalled. At first, Mack “said she was glad the deputy came along to save her from an uncomfortable situation,” according to Leslie’s account.

“She referred to it as divine intervention,” he wrote of his first call with Mack.

Mack purportedly also asked about “what was public and how this could play out.” Two days after the incident, she apparently learned from a lobbyist that something was lurking in the ranger’s notes. According to his email, Leslie told her they stated her trousers were at half-staff.

“She did not comment other than to say this is very salacious and that she is married to a minister and her career could be ruined,” Leslie reportedly wrote. “I said I understood that but if you are choosing to say that the park ranger lied … I have a big problem.”

But hey, we should be grateful that we now have a new entry in that great Republican lexicon of "This is what I was ACTUALLY doing when you think I was doing the bad sex." Sen. Larry Craig had a "wide stance," IN HIS PANTS. Family Research Council co-founding board member George Rekers hired that rentboy to "lift his luggage." Mark Sanford "hiked the Appalachian trail," with his dick. Newt Gingrich only was cheating on his wife because he loved America so much.