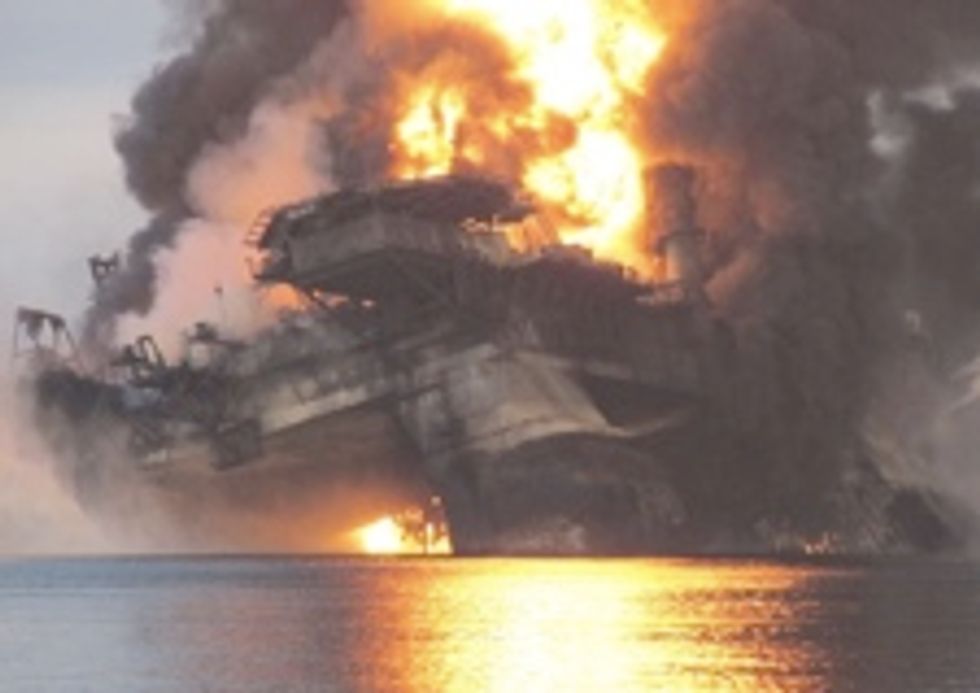 If you got together a big private party full of Shell Oil Company VIPs in a posh location like the Seattle Space Needle to celebrate the impending start to their new Arctic drilling project off the coast of Alaska, and they decided to mark the occasion by building a scale replica of the real life oil rig going to the Arctic and this oil rig was made by the same people who built the Deepwater Horizon rig and this scale model rig was designed to neatly dispense alcohol for party guests, what do you think must inevitably occur with all that symbolic setup sitting around tempting fate? Occupy Seattle activist Logan Price was able to sneak in there and find out: "It all started with a malfunction.... of the event's centerpiece, a scale model of the Kulluk, one of the rigs heading up north, which was sitting in a basin of liquor (rum and coke?) next to an ice sculpture in the shape of an iceberg..." Oh dear. We like where this is going. **UPDATE: Your Wonkette editor is a terrible, gullible person and the story is apparently a sad fake and we are ashamed. Oh well.**

Without further delay, here are the guests of the Shell oil party acting out their own adaptation of the horror of an exploding oil rig:

I guess the photo-op was meant to be a symbolic tapping of the Arctic. There was a ridiculous three-foot-high scale model of their Arctic drilling rig, the Kulluk, and the mini-rig had a tap to pump liquor for the guests.

The guest of honor was an elderly Japanese man introduced as the original Chief Engineer of the Kulluk rig who used to work at Mitsui back in the '80s. But when the man went to turn on the ‘rig,’ the liquor went everywhere - and the first to be hit was another elderly guest, the widow of the man who'd actually designed the Kulluk back in the 1980s.

The guy in charge kept asking the old engineer to fix it but he obviously had no idea how to turn it off. Shell's PR people got REALLY worked up, and the designer’s widow started yelling. At this point the guy who was presenting the new ad campaign told me to turn off my camera and got pretty aggressive.

PATHOS. We love it. [Occupy Seattle/Treehugger]