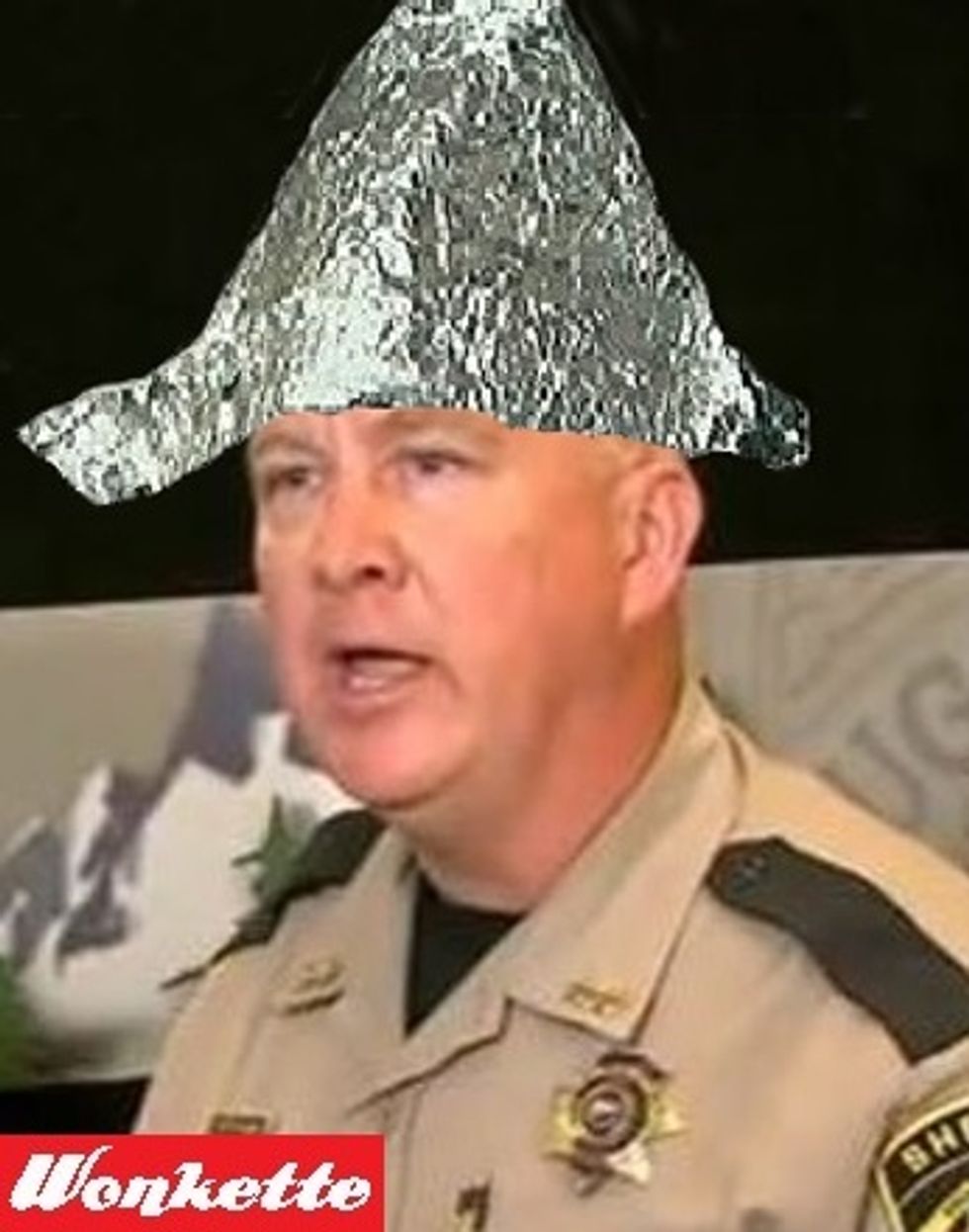 Next up, I'd like to brief you on the status of our precious bodily fluids

Since the horrific shootings at Umpqua Community College last Thursday, the Internet has discovered oodles of fun stuff about Sheriff John Hanlin, whose office is investigating the murders. For one thing, the month following the Sandy Hook Elementary massacre, Hanlin posted a link to a Sandy Hook "Truther" video on his Facebook page; while that post has since been removed, it was widely screencapped:

'The trouble with having an open mind, of course, is that people will insist on coming along and trying to put things in it' -- Terry Pratchett

This is not to say that Hanlin necessarily agreed with everything in the video, which explains that the federal government faked the Sandy Hook shootings -- and 9/11, too, to cover all the conspiracy bases -- so that it could impose tyranny and take our guns, as of course it has. He might merely be a skeptical person who wonders who we can trust in these confusing times: law enforcement agencies and their so-called "forensic investigations," or perhaps random wackaloons on the YouTubes. On Friday, Hanlin told CNN, "I know what you're referring to, but that's not a conspiracy theory that I have." He didn't elaborate. Maybe now that he's actually in the middle of an investigation -- which the Loonosphere decided within the first hour or two was a "false flag operation" -- he's rethinking the advisability of sharing bullshit hoax theories.

Then, two days after posting that important question to Facebook, Hanlin sent a letter to Vice President Joe Biden, who was in charge of formulating the Obama administration's response to Sandy Hook (which Hanlin may or may not have thought the administration faked in the first place). The letter explains what sheriffs do and urges Biden to "NOT tamper with or attempt to amend the 2nd Amendment," because "[gun] control is NOT the answer to preventing heinous crimes like school shootings."

As George Zornick points out at The Nation, the last couple paragraphs of that letter are shot through with rhetoric common to far-right anti-government groups like the Oath Keepers and Bundy Ranch provocateur Richard "put the women in front" Mack's "Constitutional Sheriffs and Peace Officers Organization" (CSPOA). No word on whether Hanlin thinks John McCain needs to be executed for treason.

Note in particular that final paragraph, where Hanlin pledges, "it is my position as Sheriff of Douglas County, Oregon that I will refuse to participate in, nor tolerate enforcement actions against citizens that are deemed unconstitutional." Deemed unconstitutional by whom? Apparently not the federal government or even the judiciary; the implication is that Hanlin, as sheriff, gets to decide what's constitutional, and darned if he's going to allow federal law enforcement to enforce federal law in Douglas County, Oregon. So, yes, this guy actually promised in 2012 to arrest or at least interfere with federal actions that he decided were unconstitutional infringements on the Holy Second Amendment. Can't see why anyone would think that's unusual; it's perfectly in line with Richard Mack's fantasy, which actually predates Sandy Hook, that one great day some brave county sheriff would become the "first one to fire the next shot around the world and arrest a couple of IRS agents.” Or ATF or FBI, whatevs.

CNN asked Hanlin about his letter to Biden Friday, but only about the part where he opposed gun control. He acknowledged that:

[G]un control has "certainly got to be part of the discussion" but insisted it was inappropriate for him to air his opinions the day after the shooting.

But under continued questioning, Hanlin finally said, "My position on it has not changed."

So far, we haven't seen anyone asking Sheriff Hanlin to elaborate on the last two paragraphs of the letter, and what exactly he thinks his "Constitutional Oath" requires or authorizes him to do to prevent federal officers from treading on the Second Amendment. You'd think that's the kind of question some hotshot national reporter would want to press Hanlin on, maybe. We know our pals at MSNBC read Yr Wonkette; maybe they could ask Sheriff Hanlin to explain his intriguing views a bit further.