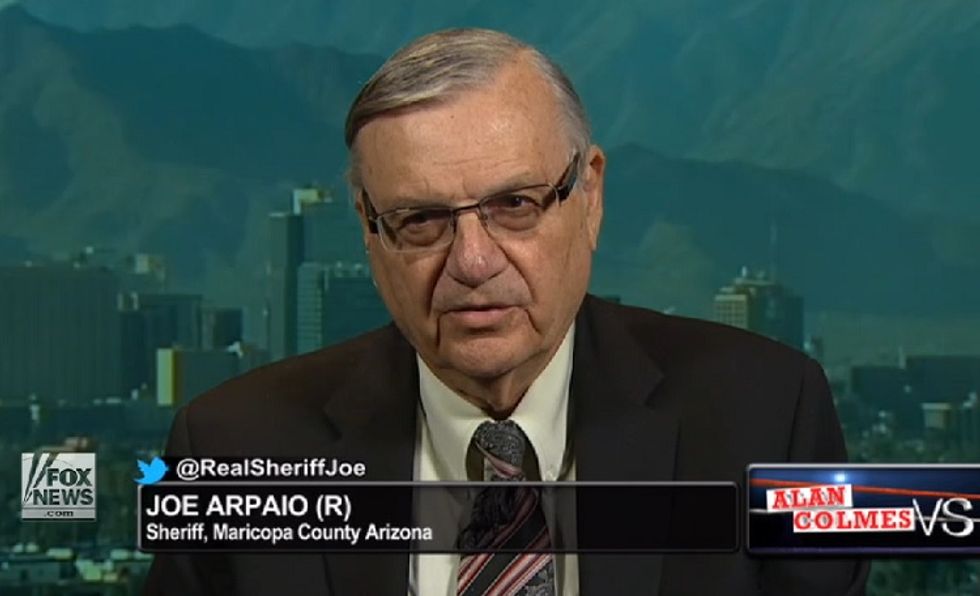 That ol' charmer is at it again

Joe Arpaio, the Maricopa County sheriff who's mastered the art of turning the fears of conservative voters into popular if ineffective crime-stopping stunts, is gearing up for his 2016 re-election bid with a call for all 250,000 Arizona concealed weapons permit holders to be ready to take down any terrorists or mass shooters they see. In an interview with Alan Colmes Wednesday, Arpaio gunsplained that it was simply an expansion of his highly successful annual mall patrol, which has prevented massacres in shopping malls during the holiday season since 1993. It's prevented tiger attacks and typhoons in Arizona shopping malls, too.

Arpaio called up the state's gun-humpers the day before the San Bernardino shootings, which is undoubtedly why that massacre happened in California, not Phoenix. He said that after the terrorist attacks in Paris, law enforcement wasn't able to keep the public safe, so it just made good sense to have lots of armed people ready to take out a bad guy at a moment's notice:

"I'm just talking about the areas where you have large crowds and someone pulls out the gun and starts shooting. Maybe somebody with a concealed weapon takes the guy down," Arpaio said.

[contextly_sidebar id="SUW1oYdHcp9yOmgfCPvHbjGuWCqLQj3Q"]Or maybe in a large crowd they hit another bystander, or the would-be hero gets shot by the SWAT team when it shows up. You just never know. But sure, it's Arizona -- people are terrific with guns there.

The idea was criticized by Steve Henry, the chief deputy of the Pinal County Sheriff's office, who said that amateurs playing Die Hard might only contribute to the chaos of a mass shooting event.

"Sometimes it's not proper to pull the trigger because the collateral damage is not worth it," Henry said. "We don't want to walk into a gun fight between anybody, much less a gun fight where people are untrained."

Henry's negative naysaying nanny opinion was dismissed by The Most Publicity-Seeking Sheriff in America when Colmes asked him about it:

Colmes: That's a fellow sheriff of yours [saying] you can't trust people in chaotic situations to respond in a way that's going to be safe for everybody.

Arpaio: Well he's not a sheriff, he's a deputy, and I don't care what he says. I run my office and decide what to do, so that's his opinion, but when you look at the 13 million people that tune into my webpage and most of them agree with me, I guess I have quite a bit of support out there.

Colmes, with that killer journalistic instinct that made him Sean Hannity's favorite moistened towelette to argue with, replied to this perfectly sound law enforcement reasoning by immediately changing the subject. We would have liked to know more about why getting more pageviews proves that untrained doofuses with Glocks should go ahead and start banging away when they perceive a threat, but Colmes had his written-out list of questions and no plans for a follow-up.

So he asked whether Arpaio, 84, was concerned by the possibility that former Phoenix Mayor Phil Gordon, who in 2008 asked the Justice Department to investigate Arpaio's anti-immigrant policies and racial profiling, is considering running against him in 2016. Arpaio simply chuckled and said that he wasn't worried: "I do my job. I've been doing it for 24 years." So there you go!

Asked if he supported Donald Trump's plan to bar all Muslims from coming into the country, Arpaio stayed cagey, neither fully endorsing the plan nor risking the wrath of any voter who thinks it's a brilliant idea:

I don't know the nuts and bolts, where he's coming from on that issue ... I don't have a position yet, I'd like to know what he's talking about. My position has always been, we welcome all the people if they come into this country legally, and I presume he meant those coming in legally, too.

Not quite sure how Sheriff Joe meant that, but to be clear, Trump would ban legal entry for people who worship the wrong way. Arapio wasn't ready to commit to an answer, but you have to give him credit for honoring how well-informed Trump must obviously be on the matter:

I gotta know the facts. I don't know everything that he may know, what his intelligence gathering or resources, so he may have a good reason, I don't know.

[contextly_sidebar id="oaoBwktm327wvRfdEiSdjlsEFip1dMdN"]Arpaio did at least concede that he "hadn't studied the constitutionality of" excluding an entire category of people from the U.S. based on religion, but he wouldn't quite go so far as to agree with Colmes that the idea is unconstitutional on its face. You gotta study up on a nuanced matter like that. He also refused to comment on the idea of making Muslims carry special identification cards, explaining, "I don't know about that. I'm not concerned with that issue as Maricopa County Sheriff." True! As everyone knows, the Maricopa County sheriff is there to chase Messicans instead of investigating sex crimes, and to investigate wives of federal judges who are investigating him.

Ever the card, Arpaio closed the interview by insisting that there's no evidence that Barack Obama was born in the United States, because the media hasn't paid enough attention to Joe Arpaio's news conferences announcing that the president's birth certificate is a fraud -- yet another duty of the Maricopa County sheriff, whose job is to do anything that gets Joe Arpaio re-elected.